Games Workshop are doing something right at the moment, first they released the first part of their new Adeptus Mechanicus range, which although I haven't bought any yet, it is only a matter of time.  Then as I was drooling over the Skitarri they go and drop an unexpected bombshell and release a stand-a-lone new boardgame featuring brand new Assassin minis.  Well I couldn't resist, so lets see what you get for your £75. 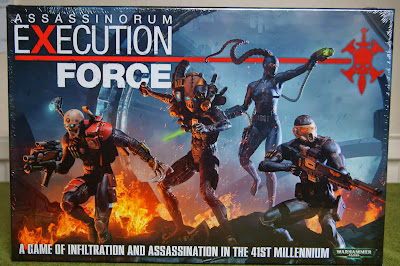 The first thing is you notice when you pick up the box is the weight, it was much heavier than I was expecting.  The box has great artwork on as would be expected, but the box itself is a step up for GW, a proper thick board game box, not the flimsy thin card boxes that starter sets come in. 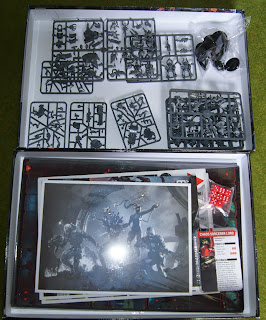 Lets get straight to why you've bought or are considering this game and that is the miniatures.  The game contains 34 hard plastic minis, 15 chaos cultists, 3 chaos space marines, a sorcerer & familiar and of course one each of the four new Assassins. 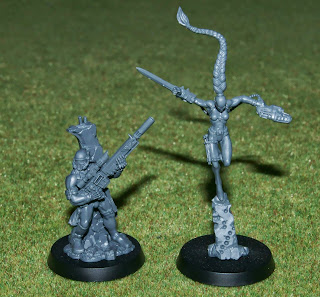 The new Assassins (a Vindicare, a Callidus, an Eversor and a Culexus) are masterpieces of the miniature makers art.  It's amazing what GW can do with plastic these days, the dynamism that they manage to capture, that would be impossible in old style metal minis, is just outstanding.  I can't gush enough over how great these are.  Quite a bit of assembly is required, these are no 'push-fit' board game pieces, but the end result is well worth the effort. 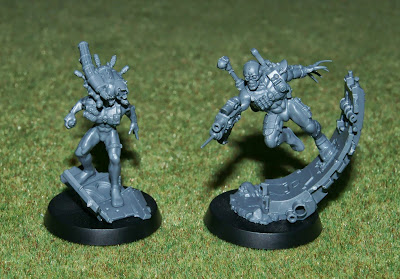 The Assassins are of course trying to assassinate someone, in this case a Chaos Sorcerer lord who comes with some mates.  All the chaos forces minis are already in the range so no real surprises here.  They are also all generic so can be painted up to match any existing chaos collection that you might have, mine will all be painted up to join my Alpha Legion army. 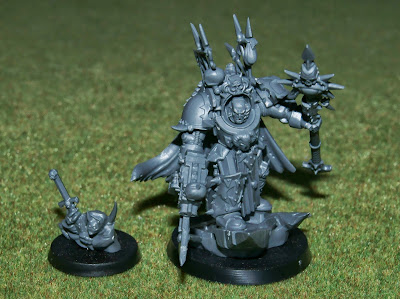 For the sorcerer they give you the complete terminator lord/sorcerer lord sprue, so you have plenty of options on how to build the guy, and will end up with a load of spares at the end.  I've built this kit up before as a lord, but decided to go the proper sorcerer way this time, staff and all.

The 15 cultists are the same ones that came in the Dark Vengeance boxed set, I liked them then, and I like them now, I'm actually glad they're the same minis as they'll fit right into my units that I got from Dark Vengeance, which have always needed a size bump really. 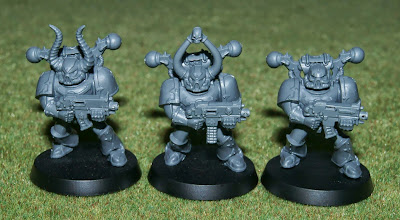 Finally we have the three Chaos Space Marines, the most disappointing minis by a long way.  There's nothing actually wrong with them, they're just a bit flat a dull compared to all the others.  On another note this is my first experience with the new 32mm bases.  Overall I like them, maybe they're slightly too big and 30mm would have been better, but the marines do fill the space well.  I'm not going to go rebasing all the marines that I already have, but now I've seen them they don't upset either. 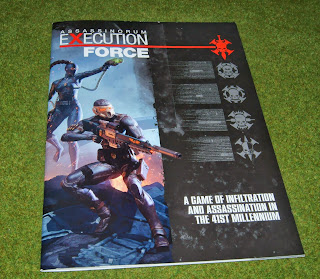 The game of course includes a rulebook, it's in full colour and is the same size and format as one of the current White Dwarf weeklies.  As well as clearly written rules the last few pages provide some interesting background on the Assassin temples. 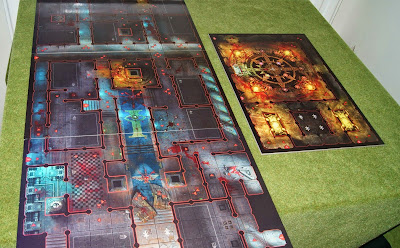 The reason the box was much heavier than I was expecting is the board sections, the game contains 4 large and every thick board sections that join together to create the playing space.  Three of them create the main space where the Assassins have to locate the teleporter and turn it on and the final piece is the inner sanctum of the Chaos Sorcerer where the Assassins mission objective is.  These were much bigger and thicker than I expected, the artwork is of course top notch too.  Very impressive. 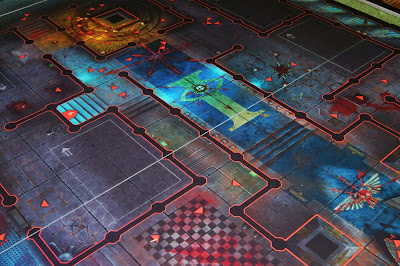 You also get a bunch of cards, counters and dice.  All high quality, for all that Games Workshop wind me up at times, they have put out an incredibly high quality product here. 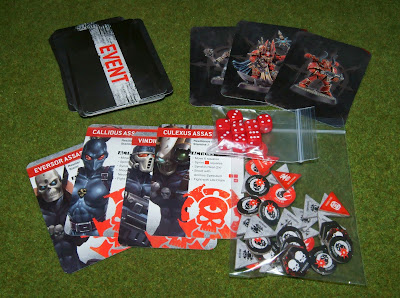 So after all my gushing about the contents how does it play? and is it actually any good as a game?

The game is a co-operative game where the players take the role of the Assassins as they make their way through the Astropathic Sanctum trying to find the teleporter which will take them to the temple of shades where they will attempt to assassinate the Chaos Sorcerer.  The Assassins get two actions each per turn, which include basic stuff such as moving, shooting and attacking.  They all have different stats and different special rules which nicely make the four Assassins play differently, using the different abilities in tandem is one of the keys to victory.

After the Assassins have had their go the game takes it's go, the turn tracker moves on, random events happen and Chaos renegades move around the board in a semi random way until they see an Assassin, upon which they start attacking.  In a nice twist the more renegades that go on alert triggers more events (which are often more renegades) and the game can quickly escalate to impossible once you let one or two alert renegades live.  This provides an interesting challenge, it would be quite easy to slowly walk around taking out one renegade at a time, but there's a 16 turn limit and you don't have the time, but push too quick and you will be overwhelmed. 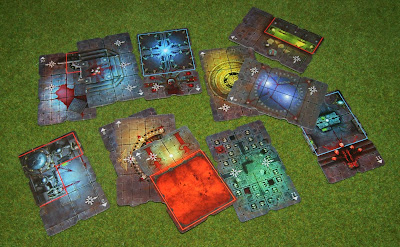 The board layout will be the same for each game, but cleverly the game comes with a random room mechanic, so you never quite know where the teleporter and the power switch will be.  Once you have found the teleporter you then have access to the final board section, the Sorcerer is always guarded by three Chaos Space Marines who are much tougher than the cultists that you mainly meet in the main board section.  We found our games to last around 45mins to an hour, which is a good length for a game like this.

My only real concern with this is the replayability.  We managed to assassinate the Sorcerer on our first attempt and out of three games in total we only failed once.  However GW have clearly realised this might be a weakness and have added a list of X-box style achievements, all of which will make the game harder to beat, and hence adding to it's longevity.

In conclusion, I reckon it's worth it for minis alone if you already have Imperial and Chaos forces for 40K, it works especially well if you have dark vengeance.  The games not a bad little filler game either, it's not massively in depth, but it is fun.  I think this is a good format for a release like this and I hope they do more like it. 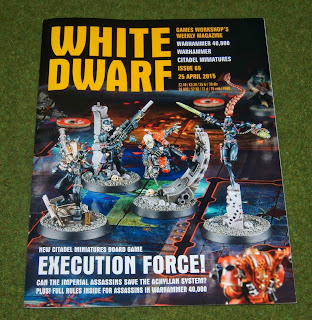 One last thing to be aware of is that whilst all the minis are compatible with Warhammer 40K, none of the rules are included.  The Chaos figures rules are in all their codex, but to get the Assassin rules you'll either need to download the (expensive) dataslate or get your hands on White Dwarf 65 which also features the rules and points for all four Assassins. 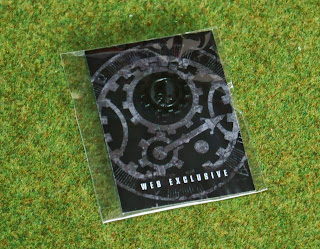 As a nice surprise GW threw in a free Adeptus Mechanicus pin with my order!  I'm not entirely sure what I'm going to do with it, but free stuff is always welcome.
Posted by brownk29 at 21:58:00