Dreadfleet, the latest one off boxed game from games workshop has arrived and in my usual rambling way I'm going to share my thoughts on it.  I've not played it yet, this is a simple 'whats in the box'.  And its a big box stuffed full of stuff.  The box itself feels very sturdy and has some great arwork on the front, and handily along the sides are instructions for assembling the ships.  The ships are the core of this game of warhammer pirateness 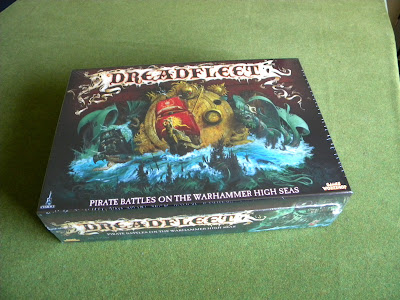 The ships are bigger than I expected, and are nice models mixing pirate sterotypes along with warhammer themes.  The game contains 10 big ships (5 for the 'good' pirates and 5 for the 'bad' pirates), each one very unique.   Overall I found it an easy kit to assemble, I have glued mine, but I think the push-fit method would work fine.  One thing of note is that each ship comes with a rather lovely moulded sea base.  I'm also pleased that GW have been brave enough to use the expanded warhammer world a bit and include an arabian and a chaos dwarf ship.  I really like these ships as models and am looking forward to painting them, I'm almost tempted to go out and buy another box so I can get two sets of the models, but am resisting so far.  I've been looking at the ships a lot over the last couple of days and the more I look the more I like them, I tried to work out my favorite and least favorite, but failed horribly, I just like them all.  There have been some poeple who have said they'd rather two coherent fleets rather than the indivualistic ships that we got, whilst I can understand this point of view I'm much happier with this as it allowed them to get far more ship archetypes into the game, and this set is almost certainly it, I'd be very suprised if any expansions ever appear.  Another great positive about these ships is that the detail on the sails is raised (I did wonder from the prome photos if it was free hand) which should look making the ships look great easy. 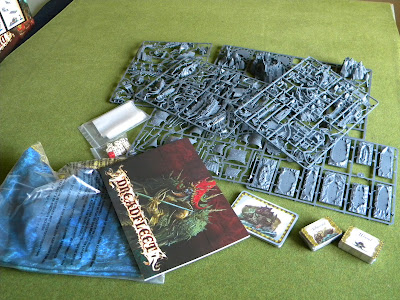 As well as the 10 big ships there are also 7 little ships, a dragon and an airship that are carried by the big ships, these are characterful little pieces and I like the dragon in particular.  There are also 3 sea monsters that the fate cards throw into the game, these work like the little ships in the game.  I'm particulary fond of the sea-giant rising up out of the ocean. 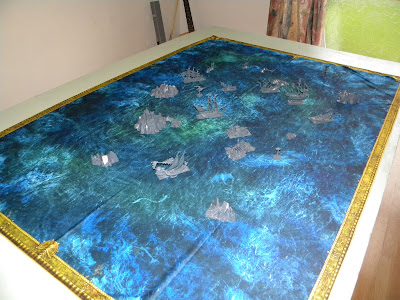 Some of the peices on the game mat

Also on the plastic sprues are a whole bunch of island and shipwreck models. These are all very warhammery and covered in skulls, this is all well and good, but I would have liked a couple that weren't covered in skulls that I could transplant into other naval games.  However in the context of this game they're absolutely fine.  They also give some sense of scale to proceedings and make you realise quite how big the warships are meant to be.
The game is played on the sea (obviously) but rather than just telling you to play on the table they provide a nice sea mat to play on.  Its a 5' by 3.5' cloth superbly detailed with waves and sea monsters.  Its a bit on the thin side, and has some creases in it from being folded in the box.  After the ships this is the next best thing in the box and definately could find use as a sea for other naval games. 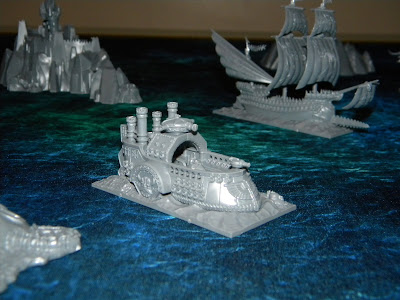 Grimnirs Thunder and the Swordfysh

A lot of the game is driven by cards, which is a change for GW (they seem to prefer dice and charts).  The two biggest decks are for fate (random things that happen every turn) and damage, and there are also much bigger cards to represent the indivual warships.  The artwork is all very nice as you'd expect, but the cards feel thin and I do wonder how well they'll take to actually being used.  Unfortunately they're not standard card sized either so I won't be able to use deck pretectors on them.

The game comes with a sizeable 96 page rulebook, which is in full colour and is as pretty as you'd expect.  It's in landscape, which I find odd and am not overly keen on, and breaks down into roughly a third each on rules, background and scenarios.  The game comes with 12 sceanrios which is quite a lot.  The binding on my book at least is not good and it started coming apart on the first read, which is very disapointing.  What I'd liked to have seen would have been a portrait hardback book like the new army books coming out of GW. 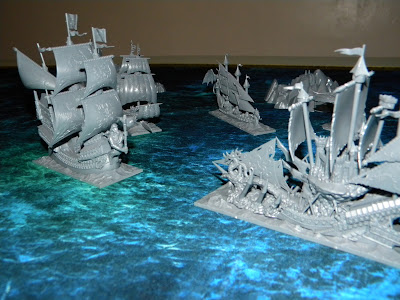 The Heldenhammer and Bloody Reaver face off

And finally last of all you get plastic turn keys,a wind marker, treasure tokens, a measuring stick, a bag of little bags (to keep things in) and a bag of dice.  I'm a big fan of making this sort of thing is plastic, they last a lot longer and keep the angles better.  It's also nice they included 2 turnkeys, one for each player, I only have one for victory at sea and it gets annoying swapping it over all the time.  The measuring stick has a nice trick too of folding to 45 degrees to allow you to check arcs of fire.


In conclusion, great game contents wise, you get a lot for your money, I think its a shame they didn't go the whole hog on the book and cards even if this raised the price, the ships and mat however are fantastic.   This is going to be a massive painting project as well, I initally estimated a months worth of painting, I now recon  more than that  And the final word.... I'm properly chuffed with is at the moment and think it's worth every penny and I'm looking forward to playing it and painting it all up.
Posted by brownk29 at 18:56:00