Here we have my breif review of the latest boxed game from Games Workshop, based of course on the new movie The Hobbit: An Unexpected Journey.  I loved the Lord of The Rings movies and had long been a fan of all the middle-earth books, and whilst I've only rarely played the lord of the rings game I have enjoyed painting the models and have been looking forward to this. 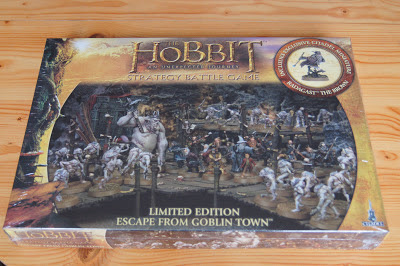 Lets start with the most important bit, which is of course the models; The set contains all 13 of the dwarves, the Hobbit himself; mr bilbo baggins, gandalf the grey, 36 'normal' goblins, a large goblin king and 3 character goblins, including one hanging from a crane.  They are all in hard plastic as is usual from GW's starter sets.  I've not seen the movie as I write this, but obviously the way all the models look is based on that and not GW's designs.  The production on all the models is fantastic, with Thorins company as the stand-outs, plus of course bilbo who looks marvelous for such a tiny model and really captures the actors features.  I wasn't overly keen on the design of the goblins at first, but having had them for over a week now they've grown on me, I think it was mearly that I was grumpy at the design having been changed from the lord of the rings films.  Both bilbo and thorin also come with a couple of weapons options, which whilst nice led to some head-scratching as to which to choose.

This is the limited edition version which also came with a seperate sprue with radaghast the brown on, a really superb model as well, and I love his little hedgehog friend. 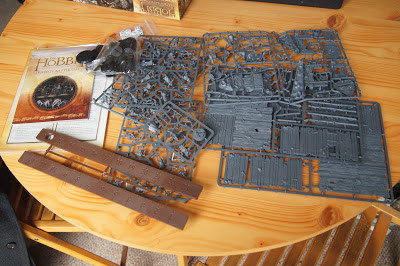 The next major component after the models is all the scenary included.  The set comes with two platforms (which can join together into a bigger platform), 4 slopes and the goblin kings' throne, all designed to represent goblin town where the dwarves are held captive.  Again it's all pretty positive, all constructed it's bigger than I expected and it's covered in great detail (I'm not entirely convinced the goblin kings doo-doo's were nessacery though!).  I don't think its particulary middle earth specific either and I can see other uses for it. 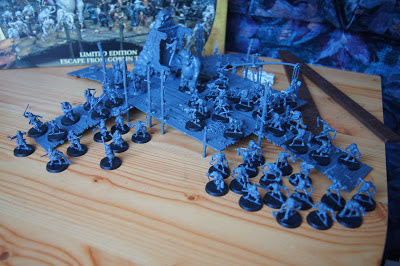 The last major part of the set are the two books.  The first is a small format full colour rulebook that contains all of the core rules and basic scenarios (although not the narritive scenarios) for the middle earth battle game (including the old lord of the rings figures).  It's all laid out nicely and is pretty well expalined, if you have either of the warhammer or 40K small rulebooks you'll know what to expect.  The second book is a larger format, but much thinner and also in full colour.  It's the introductory booklet and it's pretty good, it comtains an introductory game explaining the basic principles, a bunch of scenarios specific to the models in the box and at the back the full stats for all the models in the box.

Basically the books contain everything you could possibly want and presented in a good way except for one vital thing... points values.  Expecting complete stats and points for all the models in the range was probaly wishful thinking, but I think not including the points for even the models included in the box is just lame.  I know they're trying to increase sales of the big rulebook, but for me at least it's not something I was ever going to buy, but without stats and points it makes it much harder for me to justify buying any other random models from the range. 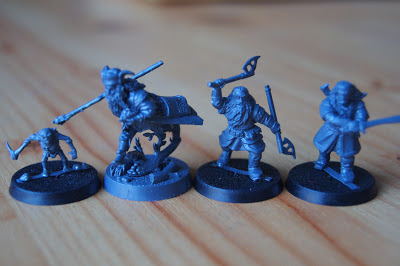 The box also contained 7 white standard dice (useful), a plastic ruler (not useful fo me, but it does no harm) and oddly a few spare round bases.  Plus a reference sheet and anotehr sheet with the rules for radagahast and on the back anotehr scenario that uses the wizard, which I thought was a nice touch.

Overall a good set for collectors of the models with a lot of the key chracters from the movie, however it is a let down as an entry set due to the lack of points values which means you can't expand on this set without buying the expensive rulebook.  The price is about £10 more than I would have liked, but still overall I'm happy with my purchase.
Posted by brownk29 at 21:03:00