Victory at Sea - Order of Battle

As I've been enjoying playing Victory at Sea (a fastplay WW2 Naval Ruleset) recently I've gone out and bought the expansion Order of Battle. 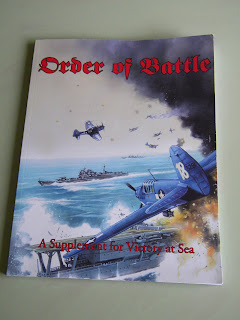 Like Victory at sea it is a large (slightly bigger than A4) paperback, black and white book.  There is 111 pages of rules (15 more than victory at sea) plus a few pages of counters of ships and planes to be photocopied and cut out.  The production values are very similar to the first book and the layout is the same (which to my mind is good, I like things to match and can get unreasonably upset when they don't).  The Book contains some offical errata for victory at sea, a section called 'new rules' that contains rules for shore batteries minefeilds and minesweepers, rules for motor torpedo boats (costal forces), rules for admirals, more aircraft rules, 4 new scenarios, a campaign in the north atlantic and expanded fleet lists for all the navies and the introduction of the Soviet navy.  This last section is the meat of the book and takes up around 2/3rds of the space.

New Rules:
The first page of this section is a number of offical rules changes to the victory at sea rules, all sensible little fixes to things that seemed a bit odd, the most important one I think is that you can now turn after half your current speed, not your maximum speed, which allows for tighter turning.  Other new rules include shore batteries, minefeilds, suicide attacks and more advanced night fighting rules, all useful additions that open up more game types and more depth.

Motor Torpedo Boats:
Rules for including tiny little motor torpedo boats(MTB's) in your games, they come 2 boats to a stand and act a little like aircraft (free turning) and have special rules for shooting and being shot at, some of them look like they could do some seriuos damage to larger ships if allowed to get their torps off.  The book contains rules for MTB's for all 7 fleets.

Admirals:
The next short section features rules for including admirals in your fleet.  You can select from a series of traits that makes your fleet better in certain aspects of warfare reflecting your admirals interests.  It contains an example admiral for each country.  The admiral has to be attached to a specific ship, which obviosuly will paint a large target on his head.  I'm not overly keen on these rules, they seem open to abuse, but still it's another option.

Advanced Aircraft Rules:
A few small changes to the way aircraft work in the game.  Also a comprihensive list of all the aircraft in the game, including a bunch of new ones to go on all the new carriers described in the last section.

Scenarios:
The book contains 4 new scenarios, 2 generic and 2 historical 'what ifs'.  The first is a costal bombarment scenario using the rules from the fist couple of chapters, this looks very useful for campaigns.  The second generic scenario is designed to represent a force hunting carriers on the open ocean.  The two historical scenarios are 'what ifs' one Germany vs Soviets in the baltic and one US vs Japan in the North pacific.

Campaign:
The book also contains a short campaign based on the possibilty of the Tirpitz hunting British and American convoys in the North Atlantic in 1941.  It contains rules for moving convoys across a hex grid representing the ocean.  This is a very specific campaiagn very different to the generic campaign rules featured in Victory at Sea.

Expanded Fleet Lists:
This section really is the main purpose of the book, all 6 navies form the first book get expanded fleets and the Soviet Navy is introduced.  The Royal Navy comes off best with a whooping 53 new classes of ships, Including cancelled battleships from the 1920's and a few ships launched just after the end of the war including the worlds last battleship HMS Vanguard.  The Germans get 10 new ships including 6 from the abandoned 'Z-Plan' (Hitlers planned expansion of the Kreigsmarine).  The Americans & Japanesse both get over 20 new ships each allowing players to feild most (if not all) of the capital ships / cruisers avaliable to both fleets.  The Italians get another 10 ships and the French a mere 6, although the French includes the interesting submarine 'Surcouf' which actaully had its own spotter aircraft.  Finally at the end of the book the Soviet Navy is introduced to the game with 17 ships including a couple of projected aircraft carriers and ships acquired from the Germans, British and Americans.

Overall I'm really pleased with this, it adds a lot more depth and options for scenarios, I like the way its easy to add some of the new rules, but completely ignore others, its a very useful toolkit and I reckon theres a lot you can do with the rules contained within.
Posted by brownk29 at 21:40:00