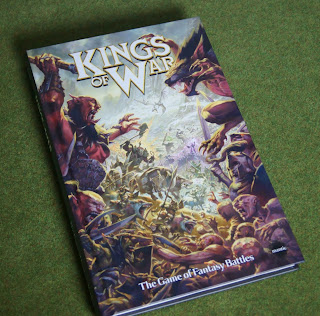 The first wave stuff from my Kings Of War kickstarter from Mantic games has arrived, I've been looking forward to this ever since I pledged and with the untimely death of Warhammer fantasy the quality of the package suddenly seemed more vital.  Lets see what we've got then.... 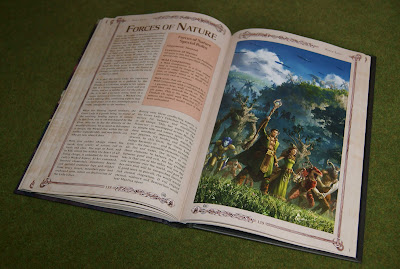 The most important item is of course the second edition hardback rulebook, containing background, rules and army lists.  The book clocks in at around 200 pages and is in full colour throughout, with lots of art and photos (some of the art is recycled, but this is the first KoW book I own so I'm not bothered), the first 50 pages are background to the world of Mantica, then you get the rules, and then finally 11 complete army lists, all of which contain more background for the different armies.

It's all well done, the background was nice to read, all pretty general stuff, but after reading it all I'm starting to see Mantica as it's own place, which before I didn't.  Inevitably it does share the usual influences that all fantasy worlds do, but this isn't all a bad thing, afterall we all want Dwarves, Elves, Orcs etc.  It's also designed so that there is plenty of space to do your own thing, with lots of different kingdoms per race and no intention of describing them all.  It's nice to be in a world near it's genesis as well, I'm curious to see how Mantic are going to grow it in the coming years.

The rules themselves are quite short and relatively simple.  Lots of nice diagrams as well, we found them intuitive enough that even in our first game we hardly had to refer to them at all. 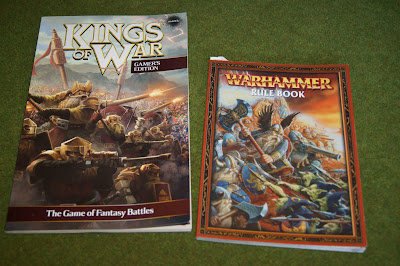 Softback Rulebook, bigger than GW's
The pledge also came with the softback 'gamers' edition, a stripped down cheaper version with none of the background material, just the rules and army lists.  It's bigger that expected, I was very much expecting a book like the GW mini-rulebooks, but as you can see it's bigger than that.  I wasn't sure at first if having both books was going to be of any use, but actually I really like having this condensed version for use during the actual gaming, as well as having the nice fancy hardback book for the shelf. 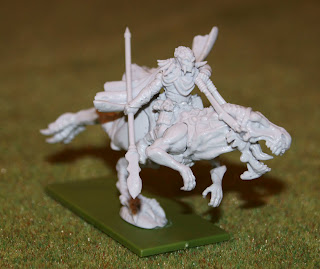 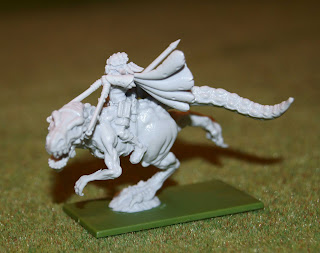 Onto the miniatures, I didn't go overboard with this kickstarter and this initial package contains a mere six miniatures!  However, they're all rather good.  First off is that exclusive Blaine miniature that mantic always do with each kickstarter, this time he's found himself a pet dinosaur.  Initially I was ecstatic when I got this mini, it's really good, I love the styling and general pose, the resin holds the detail really well and I was looking forward to getting him painted.  However............ 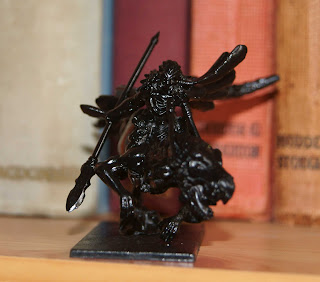 After taking the pics for this post I undercoated Blaine and then left him on the shelf for a few days before coming back to find him like this.  The single ankle joint can't hold the weight of the mini and mine has slowly bent down until the hands are touching the base.  I tried using the hot water method to return him to the original pose, which worked briefly, but then he nose-dived again.  I'm a bit gutted to be honest.  Hopefully it's just mine and not something that will affect all of them and I can get a new one. 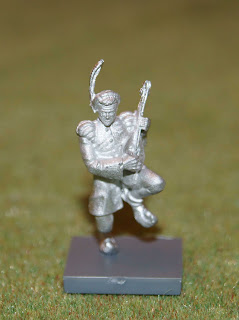 The second exclusive mini was this 'Ronaldo the Bard'.  Nothing wrong with this chap, just a characterful little mini to add to the collection. 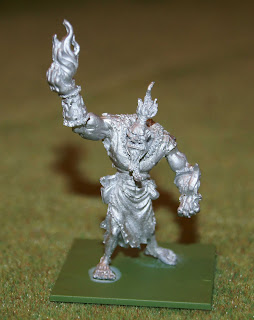 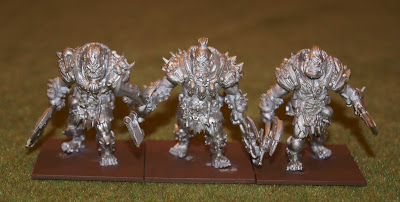 The one add-on I bought that came with the first wave are these Ogre minis, a Warlock and a regiment of three Berserker Braves.  The Warlock is OK, if nothing special, the Braves on the other hand are some of the best minis that I've yet seen from Mantic, I'm really pleased with these and will be looking to expand my Ogre collection further. 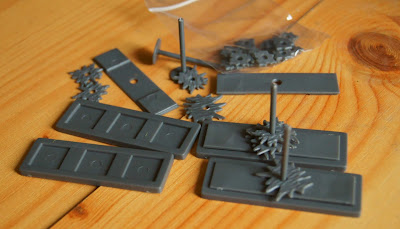 The pack of nerve counters is quite cleverly done giving you the option of using a dice holder or stacking 'hits'.  The hard plastic nature of the kit allows you to paint them up to match your army as well. 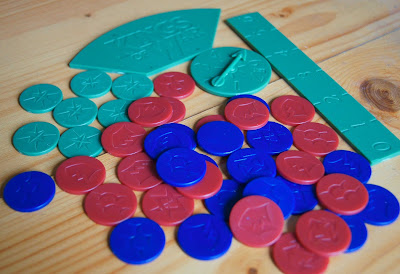 And finally we have a pack of game counters.  These are simple, but do the job fine, except that I'm not entirely sure what all the symbols are meant to mean, a little sheet explaining which is which would have been of massive help, but no doubt we'll be able to come up with a system that works.


The vital question though...  is the game any good?


Well I've got three games in so far, and I can report that both I and my opponents thoroughly enjoyed all three.  They were all quite close as well, with the game still in the balance up to at least the end of turn five and in one case coming down to the last dice roll!  My current KoW record stands at one win, one loss and one draw how's that for balance.
Whilst playing it really felt like our manoeuvring was the key to winning or loosing the game, not some dirty little army building trick, flank and rear charges are deadly in this game, but can often leave you exposed yourself.  It's early days, but the lists seem very balanced as well, everything in it has a use and even the big monsters aren't dominating the way they are in some games.  Magic, which can be my pet hate in many fantasy games, seems to be at the right level for me, it has an influence and is useful, but it's not overpowering.
The lists are really rather flexible as well and with each one there are many different ways you could use it and have a successful force.  The Kingdoms of men lists deserves a special mention here, as well as being useful for representing any human fantasy force you can think of it also opens up a huge range of historical games you could play straight from this book, and with only the slightest bit of modification you can basically fight any battle from Ancient Egypt up to the late 19th century.
It looks like Kings of War is going to be my large scale game of choice for some time to come.

That's it for now, I can't wait for my Forces of Nature starter army and the campaign book which are due some point later in the year to arrive.  In the meantime, I can see a Kingdom of Men project on the horizon that wants me to start moving toward it.
Posted by brownk29 at 12:58:00