Dwarf Kings Hold: Green Menace, the second dungeon skirmish game from Mantic Games, has finally arrived, not sure if it was Mantic or Maelstroms fault that its a couple of weeks late, but never mind, now its here what do I think. 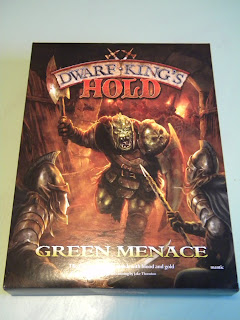 The first thing to note is that this isn't an expansion, but a second starter game (apparently the third release will expand both this and Dead Rising).  But it doesn't just rehash the last game it has two new races and 6 new scenarios based on the same core mechanics.  I like this approach we've got two solid fun games with lots of opportunities for fiddling with.  I will also state here at the beginning that I liked DKH: Dead Rising a lot so I was expecting to like this.

The box is the same size as before, and made to the same standard, but is thinner, I was worried at first that this might mean I'd struggle to get all the pieces back in (something I hate with games), but I'm happy to report this isn't the case, it all fits snuggly back in even with the small Mantic case I've put in to hold the models (I still think a small case would be a nice inclusion to the game).  What I really like about the box though is the great old school cover art, really takes me back to when I was just starting in the hobby.
The contents where very much what I expected and follow the same principles as the first set (which is good as they match completely). 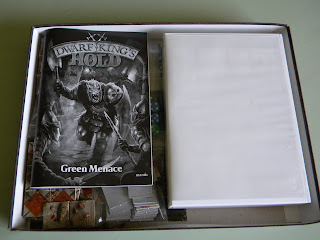 The contents snuggly returned to the box after assembly.

The dungeon is made up of 29 sections that are placed next to each other in a modular way.  There is no 'jigging' and you just place the sections next to each other, this trades stability for flexibility, which is fine in my view.  The artwork is good, although the artwork on the smaller pieces seems to have been reclyled from dead rising.

The game contains numerous tokens made from the same card as the board sections, again the artwork is quite nice, I think the treasure tokens could do with being two sided really as they spend most of the game face down and you just see their backs, there should be a nice sealed chest on the back.

The box contains 9 dice with 4 blue and 5 green ones, its nice that this time we have different coloured dice for the two races.

The book is a small 21 page black and white rulebook, it contains the full core rules for dwarf kings hold and the special rules and scenarios for using the orcs and elves in Green Menace.

You get 29 miniatures in the game, 10 elf spearmen, 10 elf archers, a sabre-toothed pussy cat, 6 orcs and 2 orc greatax (orcs with big double handed weapons).  The models are a mixed bunch.  the elves are a bit meh, they were mantic's first race and they've come a long way since then, they're not awful, and I think they're better in person than in the pictures, but they're not going to set your world alight.  The improvement in the range is something that is encapsulated with the orcs which are their latest range and are really good, the best plastic orcs I think I've seen in fact.  One thing to note is that these are the minis from mantics normal range so require assembly and are not aimed at board gamers, this isn't a criticism (I actually think its a positive and personally I like the flexibility) but is something to be aware of.  I would have different colours for the 2 races as well, but as I'm planning on painting my models it's not a big deal to me.  Like last time square bases aren't provided so if you plan on using these for either kings of war or warhammer as well you'll need to get seperate bases.  There is also a lot of spare bits on the sprues including 2 dead elves and a bunch of cool little orclings, useful little bits for modellers and poeple who try their hand at designing new scenarios (those orclings are beging to get used for something). 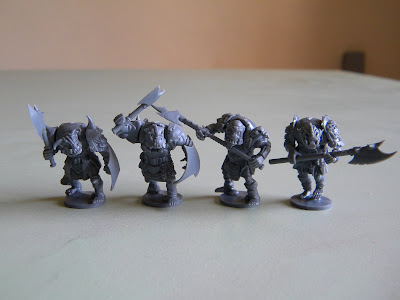 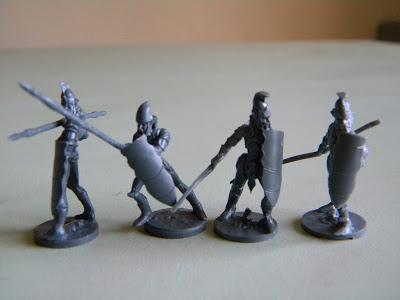 A few of the Elves﻿ 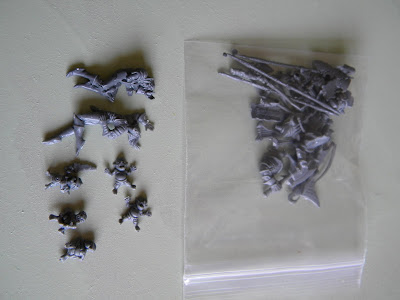 All the bits I had left over.

The core gameplay is the same as in dead rising, it uses a deck of tokens for each side which allow you to activate models, this introduces a limited deck management as well as you having to work out the order of actions.  The game is scenario based and the game includes 6 scenarios, but as playing with the different races is very different that's 12 ways to play.  The scenarios start off simply and get more complicated as you go along, adding speical rules along the way that each add a new twist and tactical challenge to the game.  The scenarios really are the heart of this game, without the thought that has gone into them the game would only be ok, but the different games and balanced challenges they introduce keep you wanting more.  One difference between this and Dead Rising is that most of the scenarios here are won by getting treasure off the board (giving the reason why the orcs and elves are in the dwarven hold in the first place) which adds a nice twist as you have to weaken your forces to take the treasure off.  The races play very differently, the orcs are tough and actually get tougher as you hurt them (something I really like, a wounded orc is a very dangerous beast), whilst the elves are fast and dodgy whilst still being capable in a fight, the elves get less follow on actions as well making them feel less indivivual and more like regimented soldiers rather than (anti) heroic personalities.

The extra races, shooting, treasure and cave ins are really adding to the 'tool-kit' whilst still keeping a good self contained game, its an appraoch that I really like.

So the conclusion: This is a great light-hearted game, with suprising tactical depth and great replay value.  There is a couple of production value issuses, but the extra stuff I would have liked would ineviably raise the cost, and as it stands this game is very reasonably priced.  Highly recomended.