A Churchill Platoon for Flames of War

I was looking at my bookshelf a couple of weeks ago and realised I'd now been buying wargames illustrated for over a year now and as I plan on keeping to buy it every month I decided I really should take out a subscription and get a box of free toys.  The box of free toys I got was a platoon of 3 Churchill tanks for flames of war.  These are my first flames of war miniatures and they were a bit of a suprise, the first suprise was the sheer weight of the little box.  The main body of the tanks are made of resin, but the tracks, guns and little add ons are all metal.  I wasn't overly keen on this way of making models (I think plastic multipart kits is the best medium for this sort of thing), but they've turned out pretty well and I'm pleased with them. 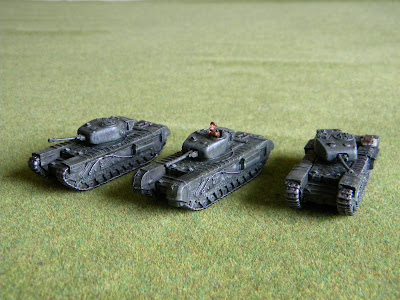 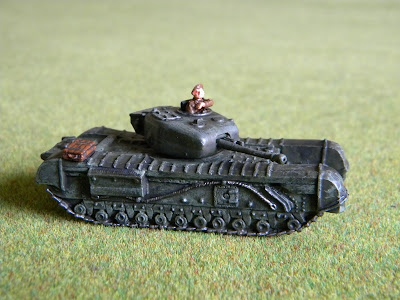 So does this mean I'm going to be starting Flames of War?  Well possibly (ok probaly), but I plan to take it slowly (this stuff is expensive) and make full use of alternative manufacturers (the plastic soldier company in particular look promising), as a next step I've picked up the 'Open Fire' starter set cheap on ebay which has given me a second tank platoon (shermans this time), the rulebook and a couple of German tanks for just over a tenner.  After that I need to do some research, Flames of War is has a complicated army selection process, its not just a case of going out and buying a bunch of British tanks and men, first off you need to divide between early, mid and late war (quite sensible system by the way.) and even then each formation has different amounts and types of each platoon allowed.  With my churchill and sherman platoons I've narrowed it down to late war British, but haven't yet got any further.
Posted by brownk29 at 18:27:00