Sometimes it takes a while to finish a post, the words won't quite come, or I get distracted by something else, but none of my other posts have taken quite as long as this one to finish.  This post has been in draft form for the last two years, just waiting for me to finish painting my last unit of sea-guard so I could post it up, but finally I've finished the final unit and today I present my High Elf army for Warhammer fantasy. 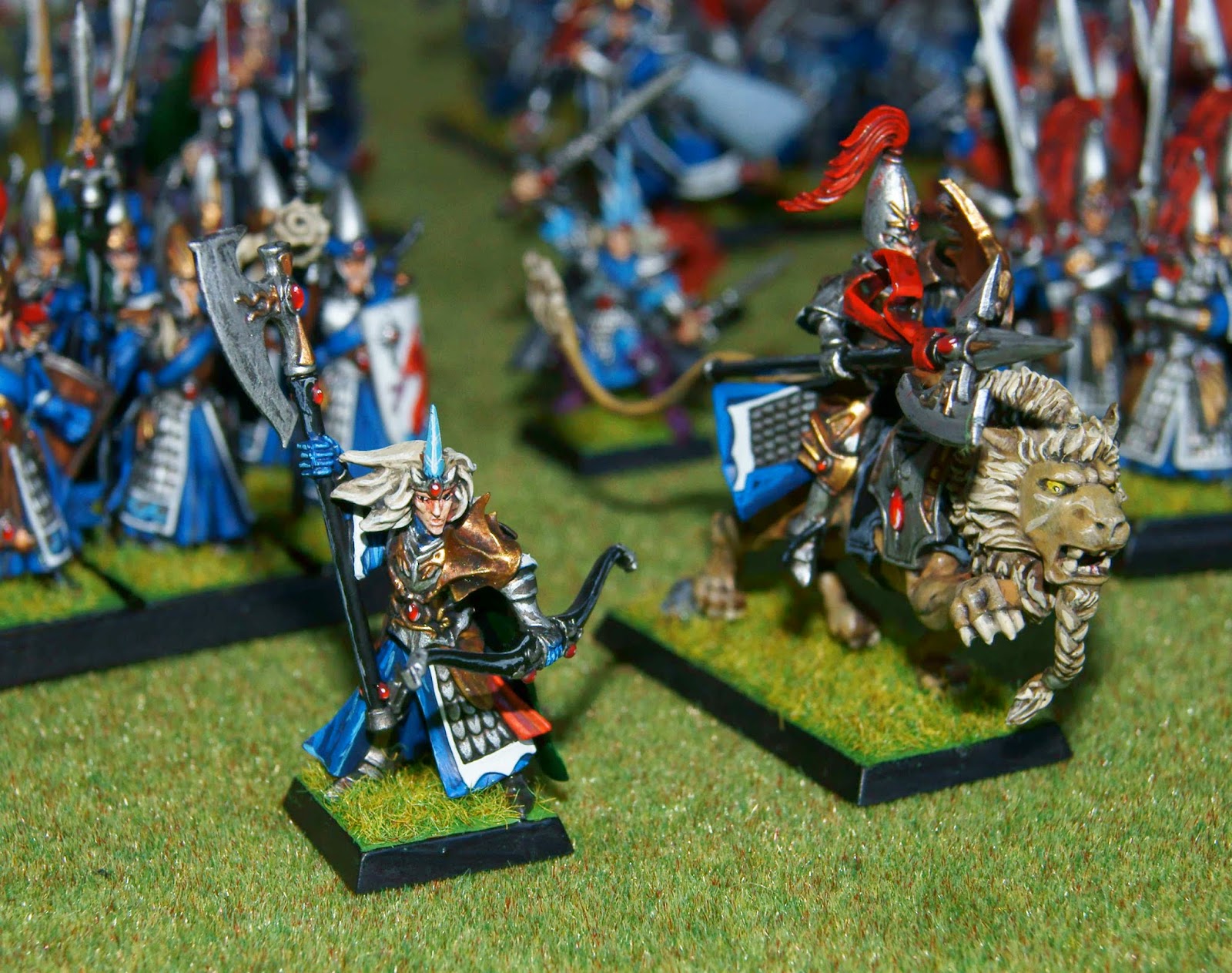 The Heroes that normally lead my force
As with most projects this started with a flurry of activity before the inevitable decline in interest, the start of this army was the release of the Island of Blood starter set for 8th edition warhammer, and the figures from this set form the core of the army.  This army has also been assembled on the cheap, it's built around two lots of Island of blood elves (minus the second griffon rider) and a bunch of the original 4th plastics I've had since I first started with warhammer, with a few extras mostly from ebay.  The back ranks of my two seaguard units are the old plastic spearmen with plastic quivers stuck on the back, I think they look fine when the army is all ranked up, even if they are a bit short. 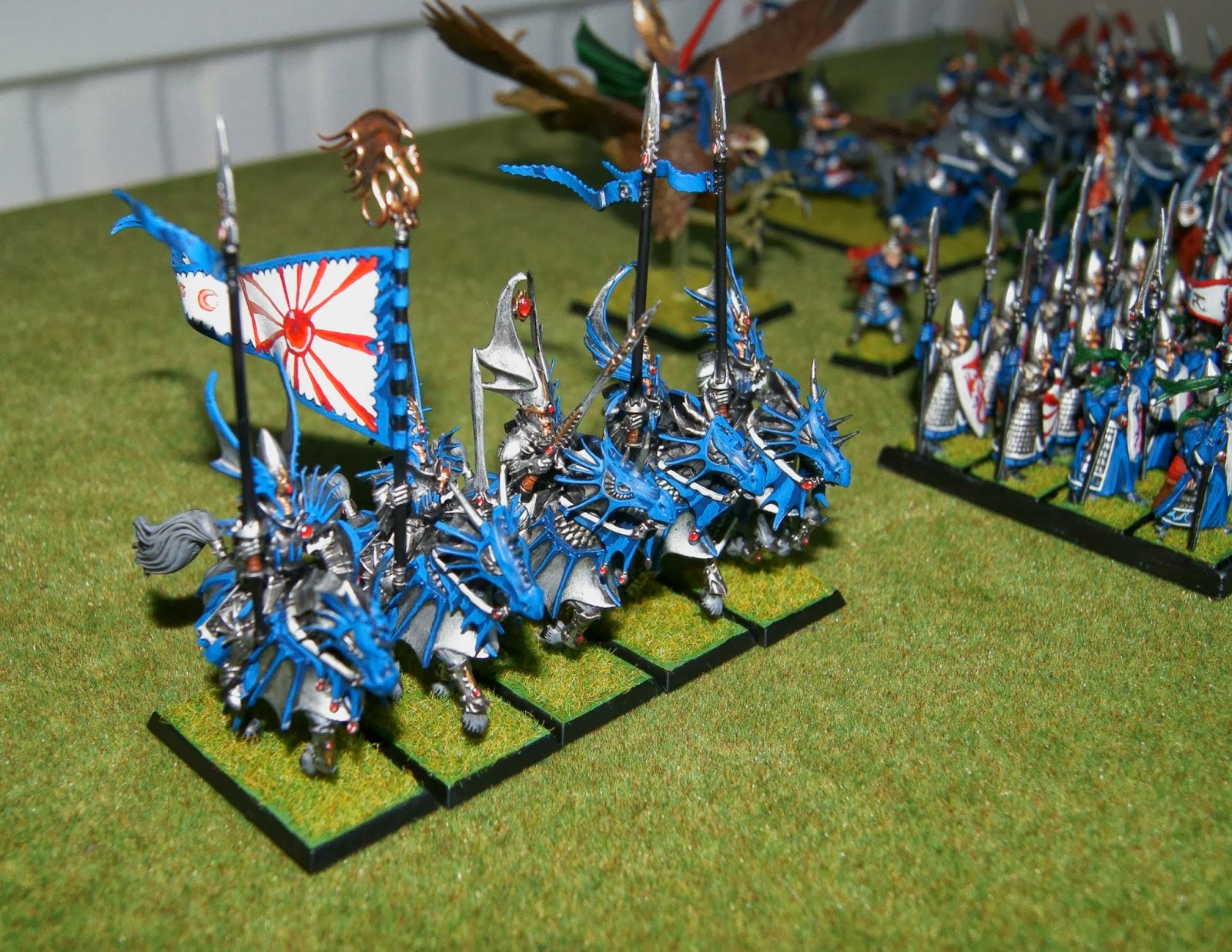 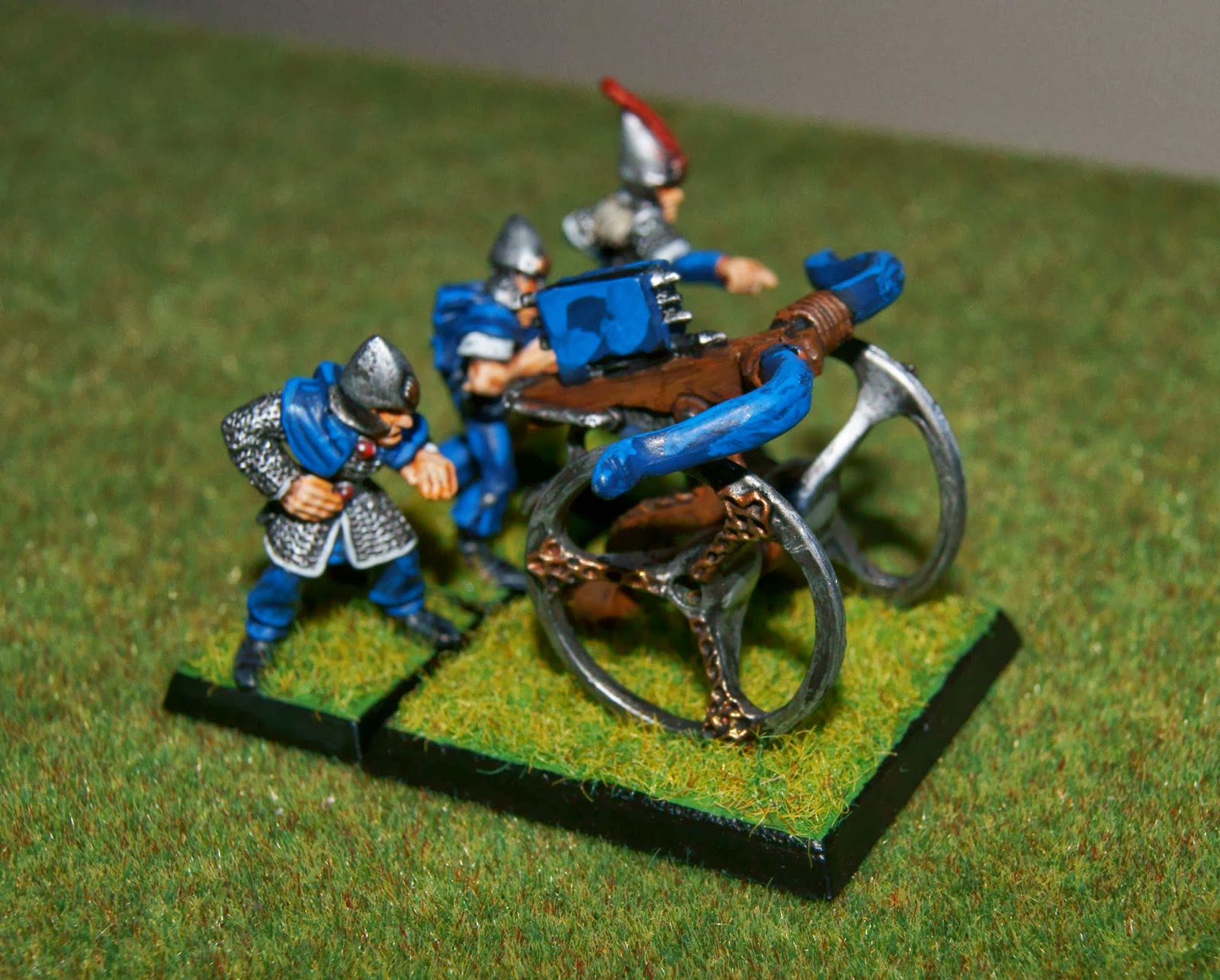 An ancient sea-elf bolt thrower
The new plastic high elves are fantastic models, but boy do they have a lot of details, which is partly responsible for me taking so long to finish this project.  I've gone for a much darker scheme than most high elf armies as well, eschewing the traditional white robes for blue, but still keeping the white trim.  I'm not a fan of overly bright elf armies, to my mind all elves are a bit dark. 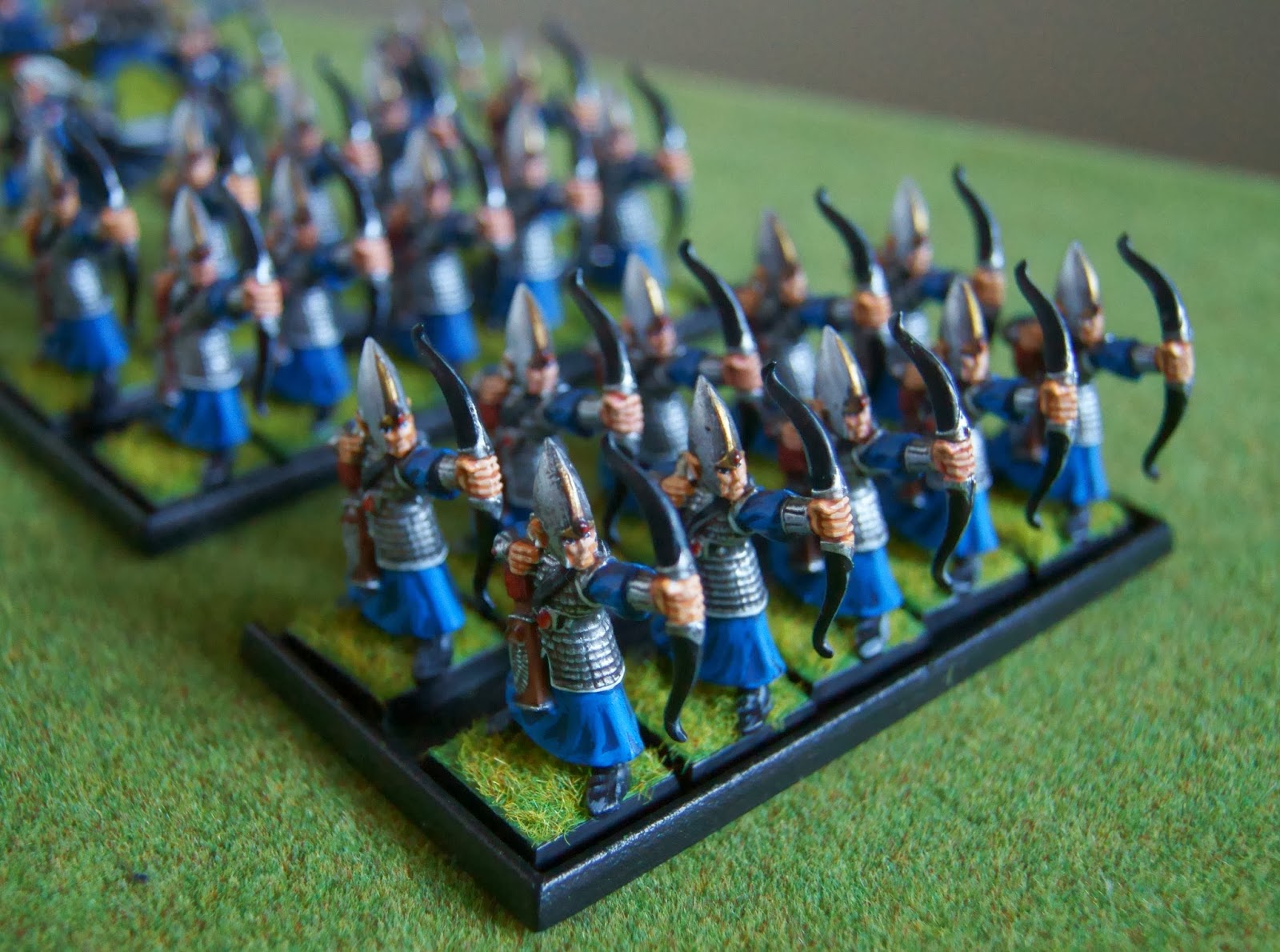 I've had a lot of fun playing with this army as well, mostly at the 1000pts and 1500pts levels, the army can put out a scary amount of arrows which can devastate lightly armoured troops, and provides some excellent punch particularly from the swordmasters of hoeth.  The army is very vulnerable though and you have to play carefully otherwise your low toughness, lightly armoured troops will easily fall.  This combination makes for a great play experience. 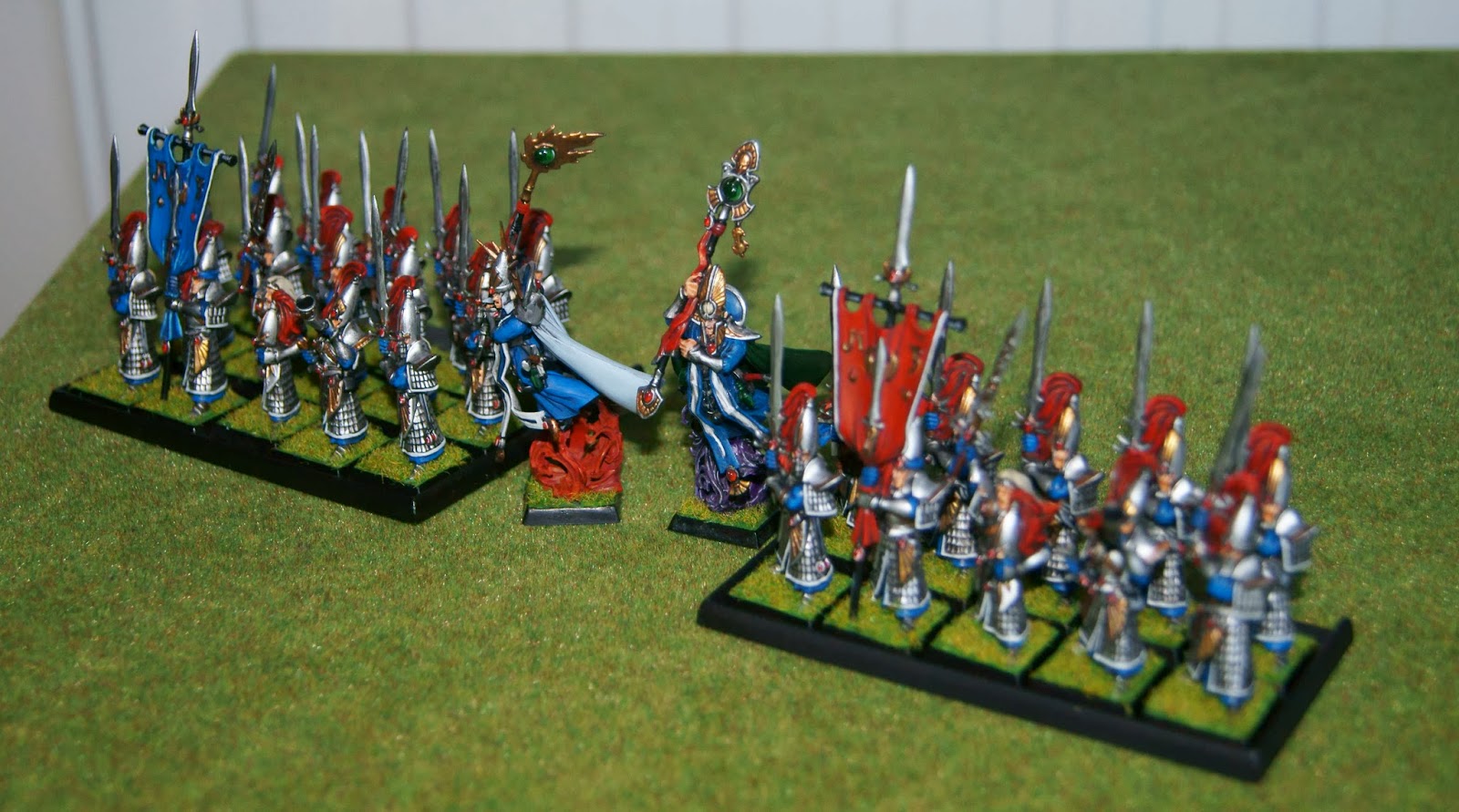 As always with these posts I'll finish with a look at the future of this collection.  Well actually it's finished for the moment, everything's painted and I have a balanced army painted to a standard I'm more than happy with.  Who am I kidding I hope to add another 5 dragon princes, a lord on a dragon and one of those new flying chariots at some point, but as usual I have no idea when. 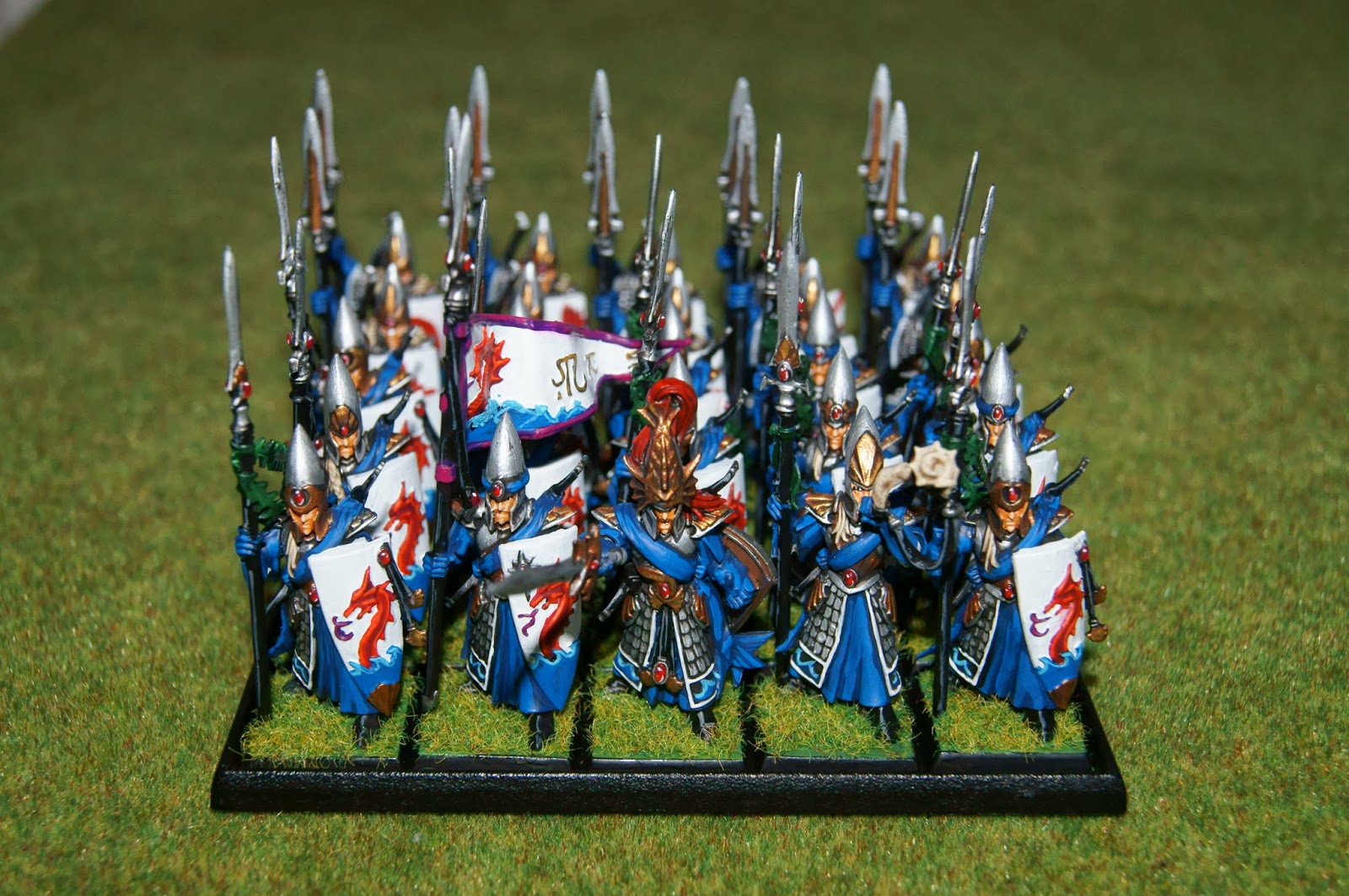