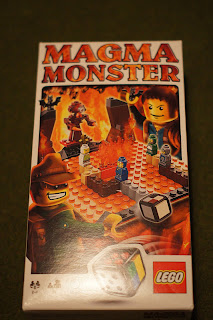 A while ago Lego started releasing what are supposed to be proper, albeit family games, but made of lego, I was intrigued from the start as I could instantly see the potential for interesting mechainics driven by the unique nature of the Lego, they come in a variety of sizes and 'difficulties', and whilst still kiddified the question is weather or not there is something here for the adult gamer.  Here we have a mid-sized game called 'magma monster', this size of lego game tends to cost around a tenner here in the UK.﻿ 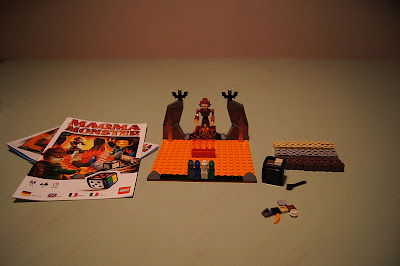 Whats in the Box

The box contains two booklets, 4 microfigure playing pieces, 2 micro bats, a funky lego dice and then a bunch of lego that forms the board and playing pieces.﻿

The first booklet is the construction instructions, its pretty standard lego instruction fare and I quite happily built the board in 10 minitues or so with no problems.  It's in colour as is the second booklet.

The second booklet is the rule book, its in many languages, and only 3 pages constitute the english rules, and the last page of that are suggested modifictations.  Nice and simple, well explained with the nessacery diagrams, I doubt anyone will have any trouble figuring out what they are supposed to be doing.  I like the fact that they encourage you to try new things as well and mod the stuff you've got, I even got a small pile of extra lego pieces that I presume are for this purpose.

The playing pieces are lego micro figures and come in 4 colours.  It's a nice little touch that they've bothered to give them each a little character, it would have been so easy just to include plain plastic pieces. 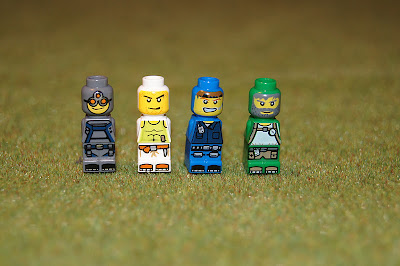 You also get a large Lego dice which you can change the sides on, you don't get any other optional sides in the game, but of course it's compatible with other lego.

The main component of the game is the lego itself.  You get an orange base plate that acts as the board, enough pieces to make the monster and the monsters cave, and then a bunch of pieces that act as the tiles for the game.

The objective of the game is to cross the lava pit (the orange board) defeat the monster and claim the ancient treasure.  This is achived by rolling the dice and the either placing a coloured tile that you can walk across the lava on, attacking another player with a bat or moving the fire barrier, depending on what you rolled.  There is also one side of the dice that allows you to place any colour tile or to make a bat attack.  You can only move along the clour tile you rolled, but can move as far as you like along that colour.  There's actually quite a lot of decisions to make in tile placement and who to attack, escpeically when you get the 'choice' side of the dice.  The game also changes towards the end as when all the tiles are placed you get to remove tiles and replace them, which again gives you a lot of options.  There is a lot of luck here as well, and its simple enough that anyone could play, but as a group of experienced gamers we found it had enough decisions and fun to keep us interested.  The games last around 20-30mins as well which is a good time slot.

As mentioned earlier the game comes with some suggested extra rules, which include placing tiles on top of each other in an upwords manner and one where you get to move the monster out of the cave and attack poeple with it.

So in conclusion I'm pretty pleased with this, it's not going to replace any big serious games, but its perfect to fill half an hour with a bit of sillyness.
Posted by brownk29 at 19:04:00

Email ThisBlogThis!Share to TwitterShare to FacebookShare to Pinterest
Labels: board games, lego