Febuary's Gaming Magazines have arrived, so lets have a looky... 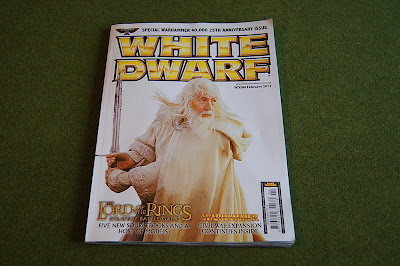 White dwarf's main theme this month was a suprise (to me anyway) return to the Lord of the Rings strategy game, for which they've released a bunch of new models (mainly expensive looking and in finecast) and a bunch of new army books.  I have bunch of Lord of the Rings figures but have only ever played the game once, and will almost certainly get some of the models when the Hobbit range comes out, the coverage however was really a bit naff, and felt like a giant sales pitch rather than any real content.  The rest of the mag however isn't too bad.  For warhammer we get the second part of the civil war rules, the rules for the new deathknell watchtower, a new scenario using said watchtower (although you could any watchtower and play it), and a couple of players vampire counts armies featured, all good stuff. 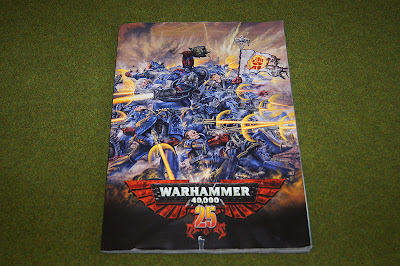 You have to turn and flip your mag over to get the warhammer 40,000 25 years celebration stuff at the back, which includes a suprislingly interesting article on the origins of 40k and a battle report.  Also featured is the 25th anniversay collectors model based on the origanal rouge trader cover.  Very nice it is too, unfortunately its in finecast and costs £20 for what is essentially one space marine, I'm going to have to think very carefully about this.  As usual we get standard bearer as well, which this month is an odd ramble about tape measures and templates! 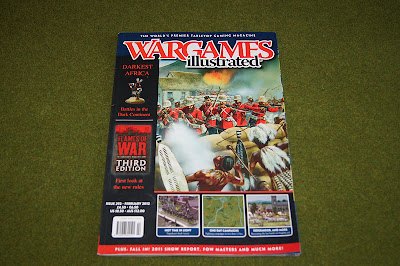 This months Wargames Illustrated has the theme of 'darkest africa', a period I have a good deal of interest in, so prehaps inevitably I like this issue quite a lot.  The theme articles include a general overview and then three battle reports using different rules and showcasing the variety of forces avaliable to feild in this setting, with a lot of focus on the natives rather than just the colonial troops.  The other article that I suspect will raise a lot of peoples interest is the (breif) design notes on the new flames of war third edition.  Having only played a couple of intro games of flames of war second edition I'm not really in a posistion of pass any kind of judgement on these.  We also get articles on wargaming the battles of Ligny and Sedgemoor and a Fall In! 2011 show report.  Not a bad issue all round.

For those interested in darkest africa it's also worth taking note that wargames illustrated have put a few articles from older issues up for free PDF download on their site.
Posted by brownk29 at 14:20:00