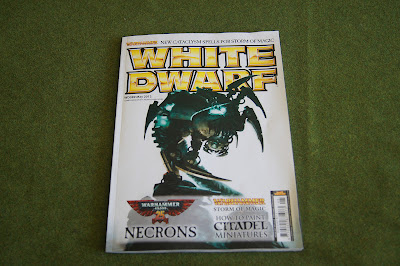 Turning first to White Dwarf this months theme is the new Necron releases, first we get the new releases section which thankfully isn't as long as last months, they then go over the same stuff again with a small article talking about the new releases and how to use them.  Then 11 pages of how to get certain colours using the new paints.  I'm normally all for painting advice, but there's no techniques here, essentially its just a list if colours which feels a bit lame.  Standard bearer is back, but is also dissapointing with a unispiring ramble about compromise.  Fortunatley there is some good stuff too, firstly 3 pages with lovely drawings describing some of the different knightly orders that use demigryph knights, even though its only three pages this is the standout article for me, more like this please.  More for warhammer next with a new scenario and new spells for storm of magic games and interestingly a selelection olf witch hunter relics and warrior priest prayers.  Then towards the back is a chunky article on a 40k campaign (heavily featuring the new necrons) which includes campaign rules, 3 scenarios, a couple of mini battle reports and two new apocalyse datasheets for the necrons, this is good stuff too and really fits together nicely and providing some solid new rules.  Finally the final installment of a tale of 4 gamers, maybe I just rememeber the origanal too fondly, but this falls a bit flat for me.  Not a bad issuse in the end, there is a good chunk of filler, but at least the good stuff was really good. 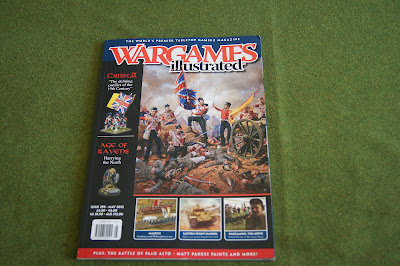 This months theme in Wargames Illustrated is the Crimean war.  The crimean war has always been a bit odd for me, in a lot of ways it serves as the bridge between the Napolenic wars and the later colonial conflicts (both periods I collect), but it's never really inspired me.  For the theme we get an overview article, plus looks at the battles of Alma and sevastapol.  Flames of war gets two articles, one on the correct way of using the new American transfer sheets and an article featuring two army lists for 101. Panzerbrigade.  I'm really chuffed by this, I've been looking at building a company around the new plastic soilder company panthers and this list is just what I need.  Matt parkes' painting series continues with a look at paints and colour theory.  Theres a few other bits as well, a look the the new 18th century game maurice, a battle report for the new dark age system age of ravens and a look at the battles of Castagnaro (1387) and Palo Alto (1846).