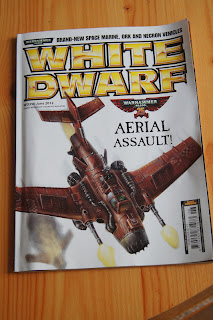 This months white dwarf is basically all about the new 40K flyers for Space Marines, Orks and Necrons and in particular the Space Marine and ork ones.  Lots and lots of pictures, some painting advice, an interesting looking scenario and of course most importantly the new offical rules for the Stormtalon and the various Ork planes.  I like the look of the new Stormtalon, but I think it's probaly a tad to expensive to be anything but a fun selection.  It's early days though and I might be proved wrong yet.  Also for 40K players there is a bit of history for a campaign involving the white scars, orks and necrons (funny that), oddly no battle report.  And finally a very impressive Blood Angels army is showcased.

The Warhammer fantasy stuff is shoved at the back and isn't much to write home about, a look at the new plastic savage orc boss and goblin shaman (both of which I like, but the orc particulary), a gallery of golden demon winning empire models (although several of which I've seen before) and a look at how to build a reiksguard chapter house out of their scenary range (essentially an advert).

Apart from that theres some more of the new style painting guides that I'm not a fan of and a dull standard bearer.  In the end it all comes down to weather you're going to buy the flyers as to weather this mag is for you. 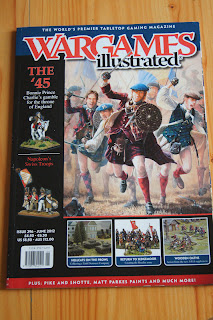 This months theme in wargames illustrated is the Jacobite rebellion of 1745 and we get three good articles on the subject, an overview, a look at 'what ifs' in the invasion of england and finally a look at what was going on back in scotland.  It's not a period thats on my imediate radar, but the 18th century is a period I might go for in the future.

Flames of war next with two articles, one on collecting tank destroyer armies and one on adding camoflague to your tanks, both ok, if not amazing articles.

The other stand out articles for me were a battle report for 'Saga' and a look at napoleons swiss troops.  I keep getting very tempted by saga, as it happens I've been reading some dark age stuff recently, I love the imagery and the low start up costs are soooo tempting, but I'm trying to resist adding yet another game for the time being.

The other big article is an extract from the new 'pike & shotte' game from warlord games, which is from the same stable as 'black powder' and 'hail ceaser'.  The extract looks at a game of the battle of pavia using the new ruleset.  I'm not a fan of copy and pasting straight from books, it's not a bad article, but feels lazy, and if I bought the book as well I don't like having paid for it in two places.