It's here finally, a massive box from Mantic which is the new Dungeon Crawling game Dungeon Saga.  I meant to do a proper unboxing showing you how it all arrived and what exactly each bit contained, but I got a bit excited and had to open it all up!

My package essentially contained the Dwarf Kings Quest boxed game, the five expansions (Return of Valandor, Infernal Crypts, Warlord of Galahir, Tyrant of Halpi and the Adventurers Companion) and a few Kickstarter exclusives.  I'm going to give a quick overview of everything and at times it might sound a bit nit picky, but overall this is an overwhelmingly positive buy for me, the game is great fun and I've got an amazing amount of stuff for my money. 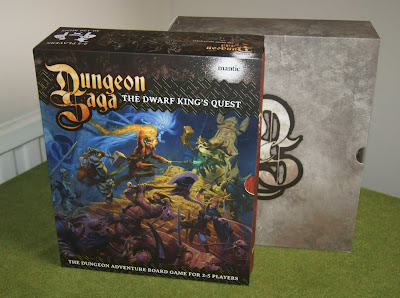 The game comes in these brilliant book boxes, with additional sleaves, we only get two with Kickstarter rather than one per expansion like at retail, but that's the price of getting such a good deal.  All the cards, tiles, tokens and books from the base game and expansions all fit in the two boxes, although I will have to find another home for the minis, could have done with a third box really.

The base game, which initially comes in one of the book boxes, is very well done, you get four classic heroes, some undead minions, four fantastic undead bosses, plus tiles, counters, furniture, dice etc.... It comes across as a good quality product.  We've had a few games and it's a lot of fun as well.  I think Mantic have achieved their aim of getting a new Heroquest on the market.  I hope it goes well for them.  I'm certainly very pleased with it.

lets see what we've got them, starting with the minis of course.  I'm impressed with the quality of the sculpting on these, another step forward for Mantic.  A lot of them came bent, but the hot water/cold water technique worked a treat.  A couple have been stuck onto bases at funny angles, but again it's something I'm confident I can fix.  Finally a lot of the minions are only attached to their bases at one point and work better with a dab of glue at the other foot.  For boardgame figures I'm impressed with these.

These are the four heroes from the base game, riffing off of Heroquest we have a barbarian, a wizard an elf and a dwarf.

The heroes from the expansions, Paladin, Cleric, Gladewalker Druid, Niad Deamonhunter, Salamander and a Halfling thief.

The bosses from the base game, the Necromancer, a Zombie Troll Shaman (how cool is that), a Banshee and an undead Dwarf King.

This is Valandor and B'eal, plus the Orc and Abyssal boss. 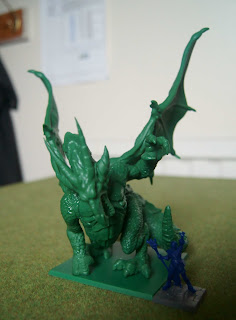 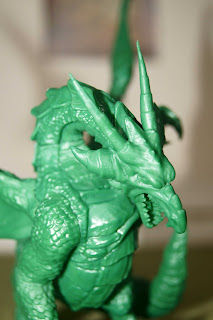 I also got this awesome Dragon! 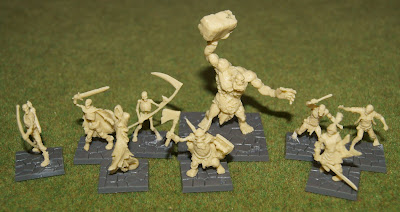 The Undead set, I got three of these. 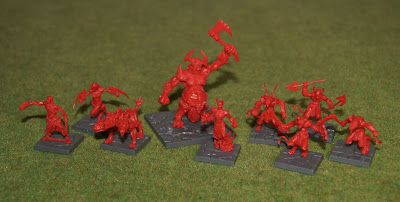 The Abyssal set, which I also got three of.  In one of my packs a lower abyssal was missing a base, which I'll have to ask for a replacement for.

The Orc set, which again I got three of.  I also had a problem with one of my orc packs which was missing a goblin archer. 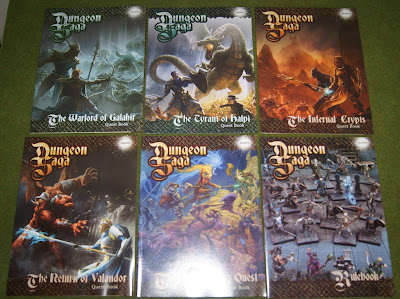 Here we have the base rulebook and five campaign books, there's a lot of missions here, and this is the meat of the game, five whole different campaigns with different baddies.  These are in full colour, if a little flimsy. 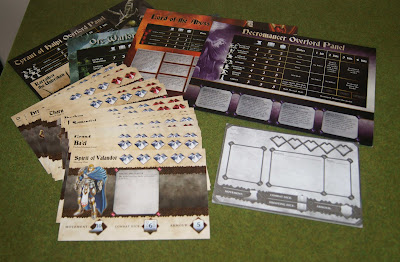 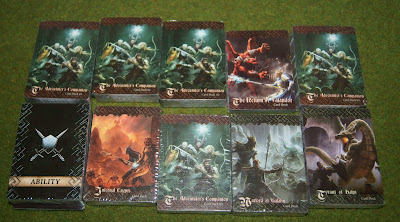 Lots of card decks too, I've not opened all these up yet, but they seem fine.  I'm going to need to get a whole bunch of card sleeves. 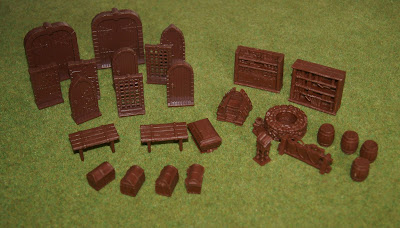 Here are half of all the door and furniture in the package.  These are really well done and with nice touches like the removable book for the lectern.  They really help give the dungeon that essential Heroquest feel. 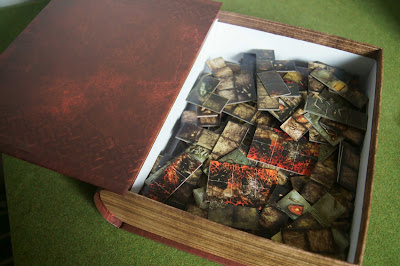 Between the base game and all the expansions I got a lot of tiles, enough to fill two thirds of one of the boxes, much thicker card than the old dwarf kings hold games and a good selection of different styles for battling different enemies.﻿ 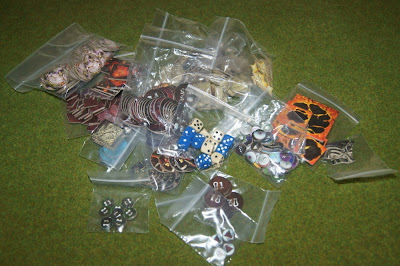 The expansions are more of the same with different minis, different missions, and new cards etc.  These are also good quality products and look polished and put together properly, the return of valandor follows directly on from the dwarf kings quest and the other three form totally separate campaigns set against either abyssals, orcs or a dragon. 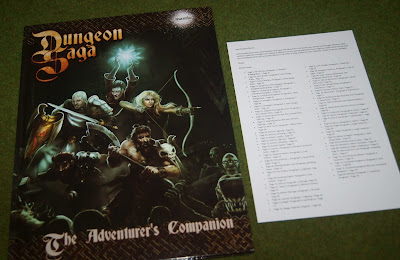 So far so good, but the adventurers companion is where it goes wrong.  This is where all the advanced rules live.  I hate to say it but this is a bad product, the intention was good, essentially trying to replicate the warhammer quest roleplay book, and it does some of that, with basic levelling, random dungeons, solo/fully co-op play and a small bestiary.  All of this stuff looks pretty basic and undeveloped though.  One think that does look good is the character creation, with lots of races and classes.  It's a lot thinner than was I was expecting given the kickstarter graphic, and it's poorly produced with many errors, see the errata sheet next to it in the picture above, and those are only the errors they've noticed!  Having said all that there is some useful stuff in here and it's not unusable, it's just frustrating, if they had gotten this bit right it would have turned this good game into an excellent one. 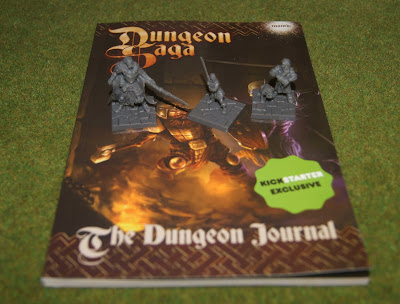 These last bits are the kickstarter exclusives.  The dungeon journal, with three attendant grey plastic heroes.  This is a smaller A5 book and not combined with the adventurers compainion as origanlly advertised.  It contains a number of new missions for the exclusive characters and all the old dwarf kings hold missions, what is there looks fine but its missing a lot of promised missions.  I'm not going to go through it all as this chap has done that here much better than I could do.  Some (but by no means all) of the missing missions have been promised later as digital downloads, which whilst not as nice as being in an actual book at least means we'll get them. 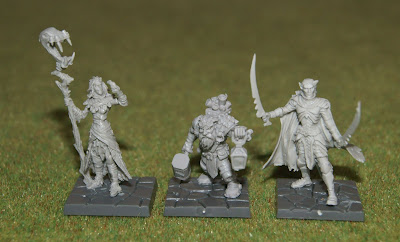 Finally we have these absolutely fantastic resin mins; Ravenna the witch, Gunn the dwarf engineer and Keldan the elf fighter.  So so pleased with these as minis, however the witch and engineer were promised as classes in the adventurers companion, but alas seem to have been forgotten.  Still minis this good are never a waste to have.  I'm regretting not ordering the resin legendary heroes now.

In conclusion I've got a mountain of excellent stuff here and a lot of adventuring and painting time ahead of me.  Mantic haven't quite delivered on everything, I eagerly await the additional digital content.  The adventurers companion is a disappointment, but ultimately it's not unusable and is one expansion out of five, and I'm not going to let it ruin my enjoyment of the base game and other four expansions.  Very glad I backed this Kickstarter.
Posted by brownk29 at 22:17:00