A few days ago I posted an unboxing of my Dungeon Saga kickstarter package, with this giant pile of minis from the world of Mantica I couldn't help wonder if I could get some Kings of War units out of all this.

One of the defining features of KoW as opposed to Warhammer is that unit sizes are fixed, usually 10, 20 or 40 for standard infantry, or 3 or 6 for large infantry.  This makes putting together units out of the set slightly trickier than it was when I used my Warhammer Quest minis in my Warhammer armies back in the day, however here are my solutions...

The easiest place to start is with the heroes and bosses, most of which happily serve as characters  for their respective armies.

The four heroes out of the starter set can be used as Kingdoms of Men, wizard, a Kingdoms of men hero, an Elf Master Hunter and a Dwarf King. 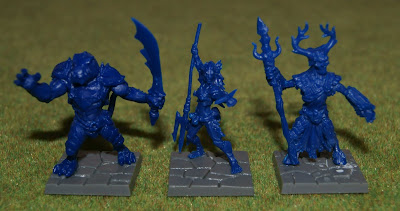 These three make excellent heroes for the forces of nature army, as a Salamander Veteran, Naiad Stalker and a Druid. 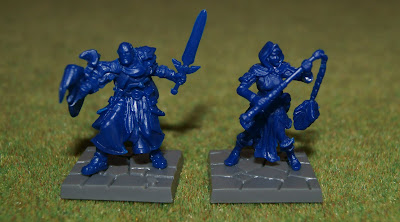 And these two obviously fit nicely into the Basilean army as a High Paladin and an Abbess. 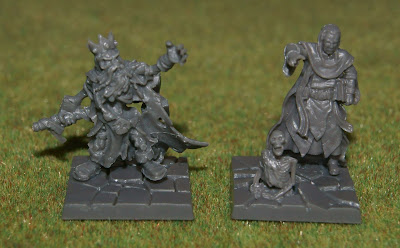 These two Bosses from the base game will make an excellent Revenant King and Necromancer.

And finally for the characters we have an Orc Krudger, an Abyssal Champion and an Efreet (who is a minion in dungeon saga, but a character in KoW). 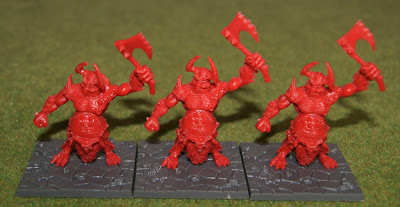 If you got a 'carton B' like me you got three Molochs, which is enough for a regiment, they even come on the right sized (50mm) bases. 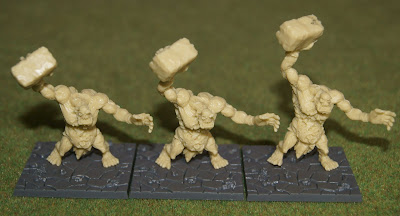 You also get three each of zombie trolls and trolls, enough for a regiment of each.  One slight issue here is they also come on 50mm bases whereas in Kings of War they should have 40mm bases.  After much deliberation, including considering rebasing them we've decided just not to worry about it and just let them be used as is.  That wouldn't be OK in a tournament obviously, but for friendly games we don't think it will have enough of effect to be worth worrying about unduly and I'm not the only player in our group who wants to be able to add dungeon saga zombie trolls to their kings of war Undead army. 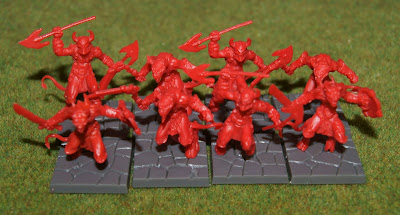 I've also been able to put together a lower abyssal troop.  The bases on these are also the wrong size for KoW, being 25mm rather than 20mm.  The solution here is a bit different, I'm using a frontage of four instead of five (still 100mm) and keep the depth of two, which does mean a depth of 50mm instead of 40mm, but that's not a real issue for friendly games.  You can pull off the same trick with the skeletons, but it's not worth it for me as I already have loads of skeletons on the right size bases.

This is where things get slightly dodgy, in my package I got three tortured souls, on 25mm bases.  In the KoW list they are large infantry on 40mm bases and come as three for a regiment.  My solution is just to put those three figures on a large base of the right footprint.  Ideally at some point I'd make a scenic base with three holes which I could pop the figs in when I wanted to use them in KoW

This little lot of Abyssals comes to 710pts, which if you add 40pts of magic items it becomes a legal 750pt Abyssal army.  Then consider that you can spend 25% of your points on allies, those two troll units come to 240pts, which added to the Abyssals creates a legal 1000pt army.  It may not be the best army ever but you could definitely have a fun battle with it.  If you have a carton B (base pledge plus the three expansions) you also have a Kings of War army!
Posted by brownk29 at 21:54:00