Last month I let my friend Mike have a go at writing a post on this very blog, which turned into an epic three-part rant about the current state of Games Workshop.  Well he seems to have got the blogging bug, but isn't yet ready to commit to starting his own blog, accordingly he's written another article for mine.

As I posted a few weeks ago we recently finally made a trip to the tank museum at Bovington, and I inevitably came away with a tank model (this Whippet), however I wasn't the only one, over to Mike.... 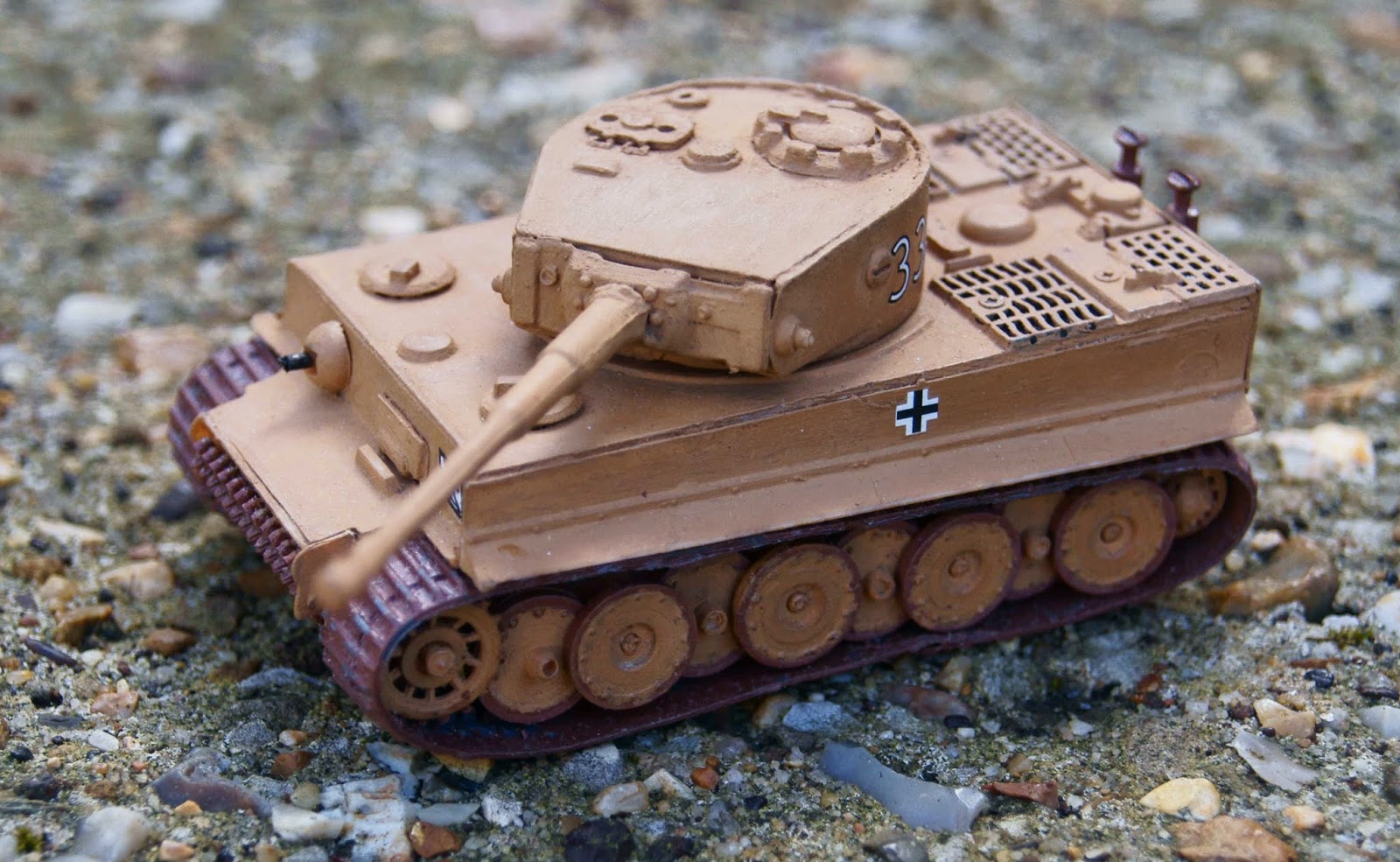 I went to Bovington tank museum this month and came away with an Airfix Tiger tank model. My Grandfather fought against Tigers in WW2 so it was the obvious choice. I have also built the 25lb field gun he manned in the African desert campaign and the invasion of Italy.
The Tiger was a little more expensive than a standard Airfix 1/76 vehicle (at £9.99) . I was happy to pay it because the museum is really good, and I wanted to support it.
The Tiger was a beast of a machine in its day and this model reflects that fact. Its a typical, quality Airfix moulding which looks just like the real thing. I used Humbrol oil based paints (I'm not a fan at all of these - Keith), and as usual they worked well. There is some minor bobbling on each model, but that’s because I used a poor brush and I should have left a bit more time for each coat of paint to dry.

The turret is not glued onto the tank turret. That means it turns very easily, which is a nice feature. Apparently allied anti-tanks gunners believed the sides of the turrets to be a slight weakness on Tigers so they targeted this area. My grandfather said that Germans crews eventually began to attach slabs of concrete to defend the weak point. I have so far resisted the urge to make my own slabs.

The down side was the tracks. Airfix produce tracks as a strip of bendy plastic that needs to be bonded together and then fitted over the wheels. The instructions say “Join by applying heat”. I tried a ‘dab’ with a soldering iron but even quite a long touch wasn’t enough to stick the ends of the tracks together.  In the end I had to apply a little more heat than I’d initially wanted to, and this caused a small amount of bumping and warping to each track. It wasn’t disastrous, but its still mildly annoying. (I really dislike the Airfix method of representing tracks at this scale, see my Whippet post for my own thoughts - Keith) 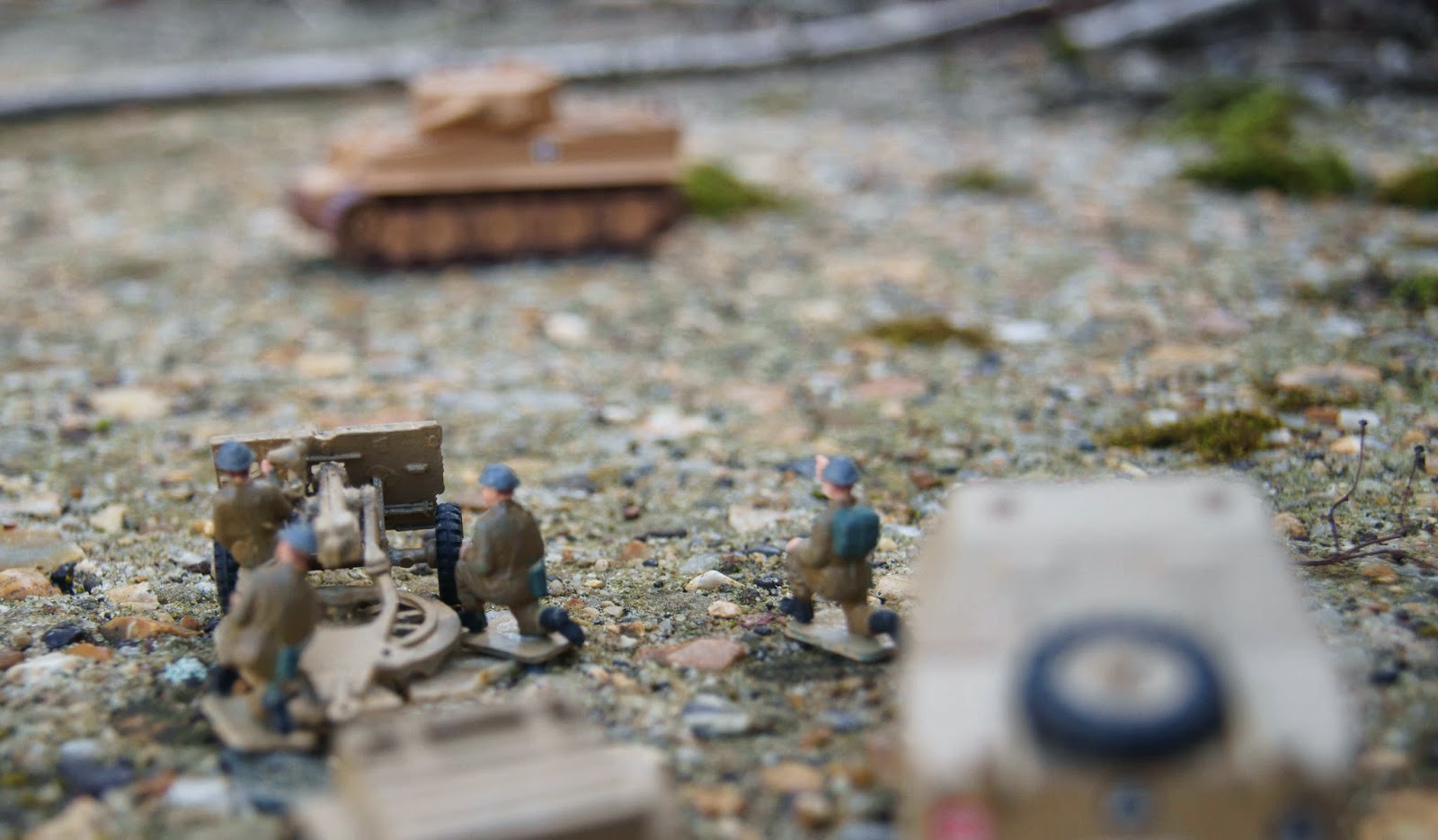 Apparently one advantage of Airfix’s track design is that the tracks are able to move round with the wheels. Unfortunately mine do not. Initially I thought that one of the wheels must have been aligned, but they all appeared to be straight.  After construction I noticed that one track was bent to an angle. I can only imagine that when the track was stretched around the wheels the weak point, the soldered strip, had stretched slightly. Its a bit annoying that after all that work the track edges its way off after one rotation. If I were to build this model again I’d try to staple the tracks together instead. I rate the model 7/10. It would have been a 9/10 if the tracks had a better design, or if there had more thorough instructions for them. 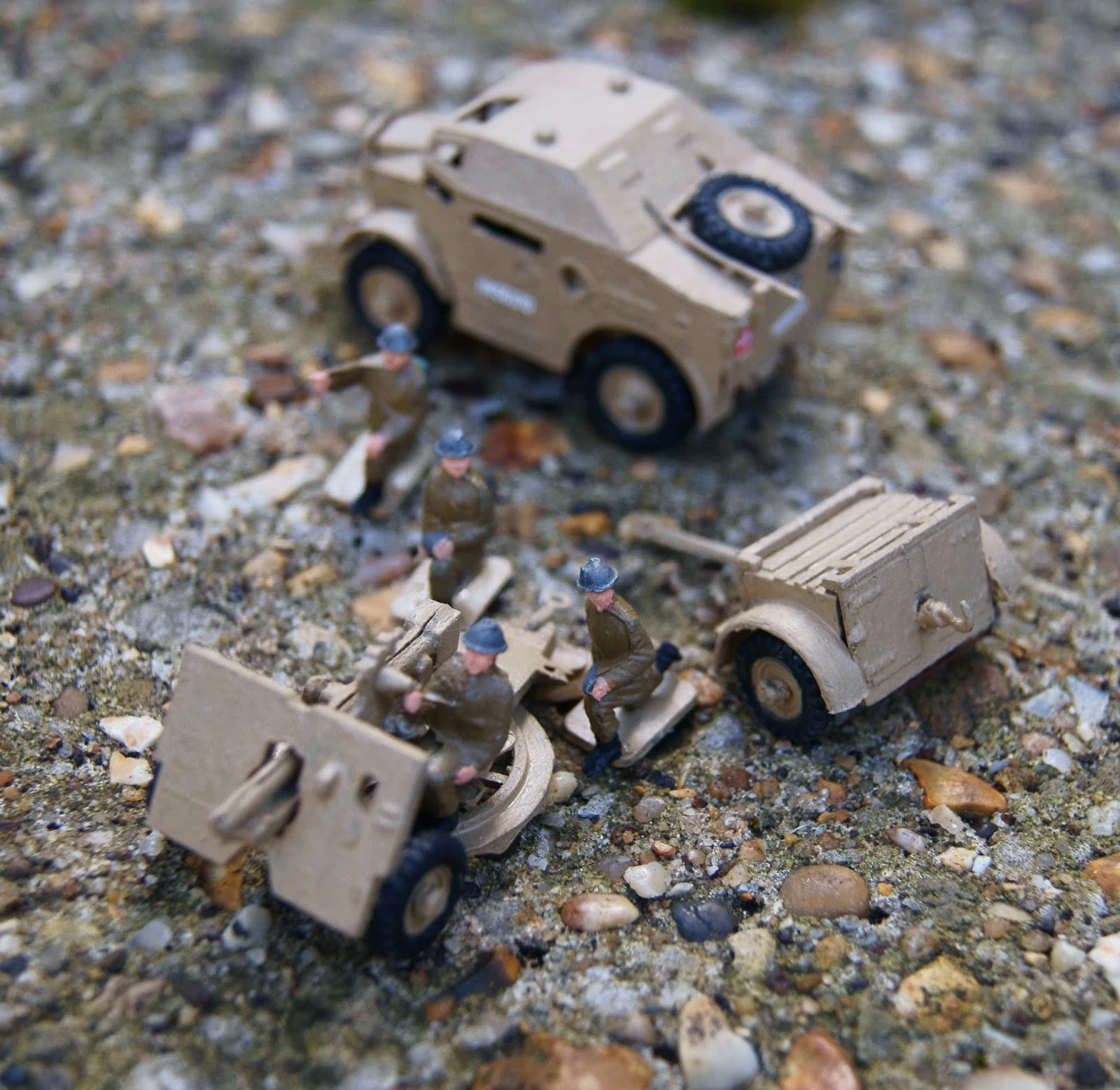 I picked up the 25 pounder for £4.50 all in on ebay – Its a standard small Airfix model, not hard to build and quite accurate in its detail. The three sections of the model attach for transportation.

Crew members are offered on separate bases. The crew aren’t very well moulded, but its hard to tell from a distance.  Airfix only offer a late war Europe colour scheme, and it took quite a lot of paint to cover the green plastic. Those are my only complaints about the kit really. 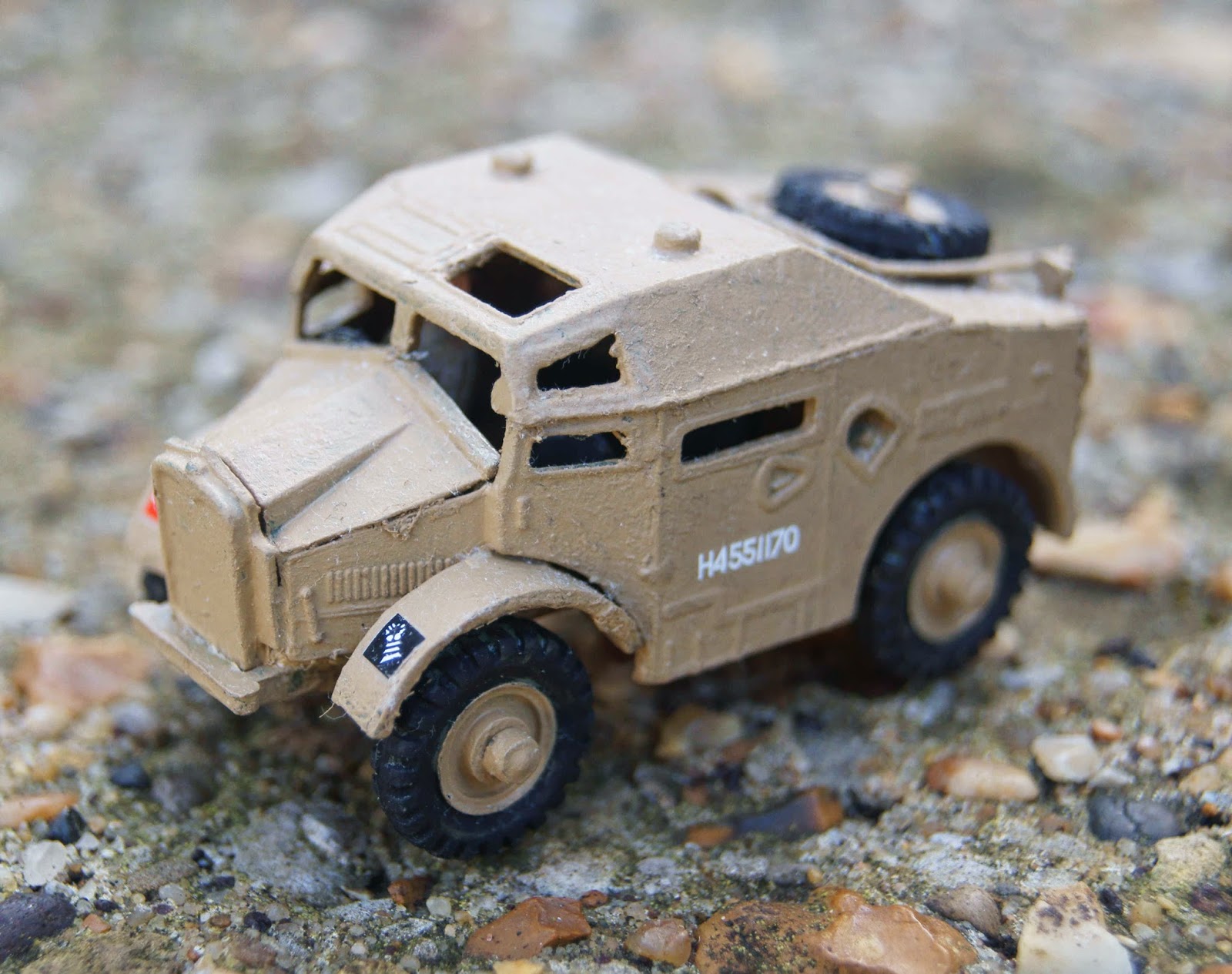 Ideally I would have spent a little more time on each model, and possibly made a diorama. As it stands they can shoot at one another from opposite ends of the shelf! 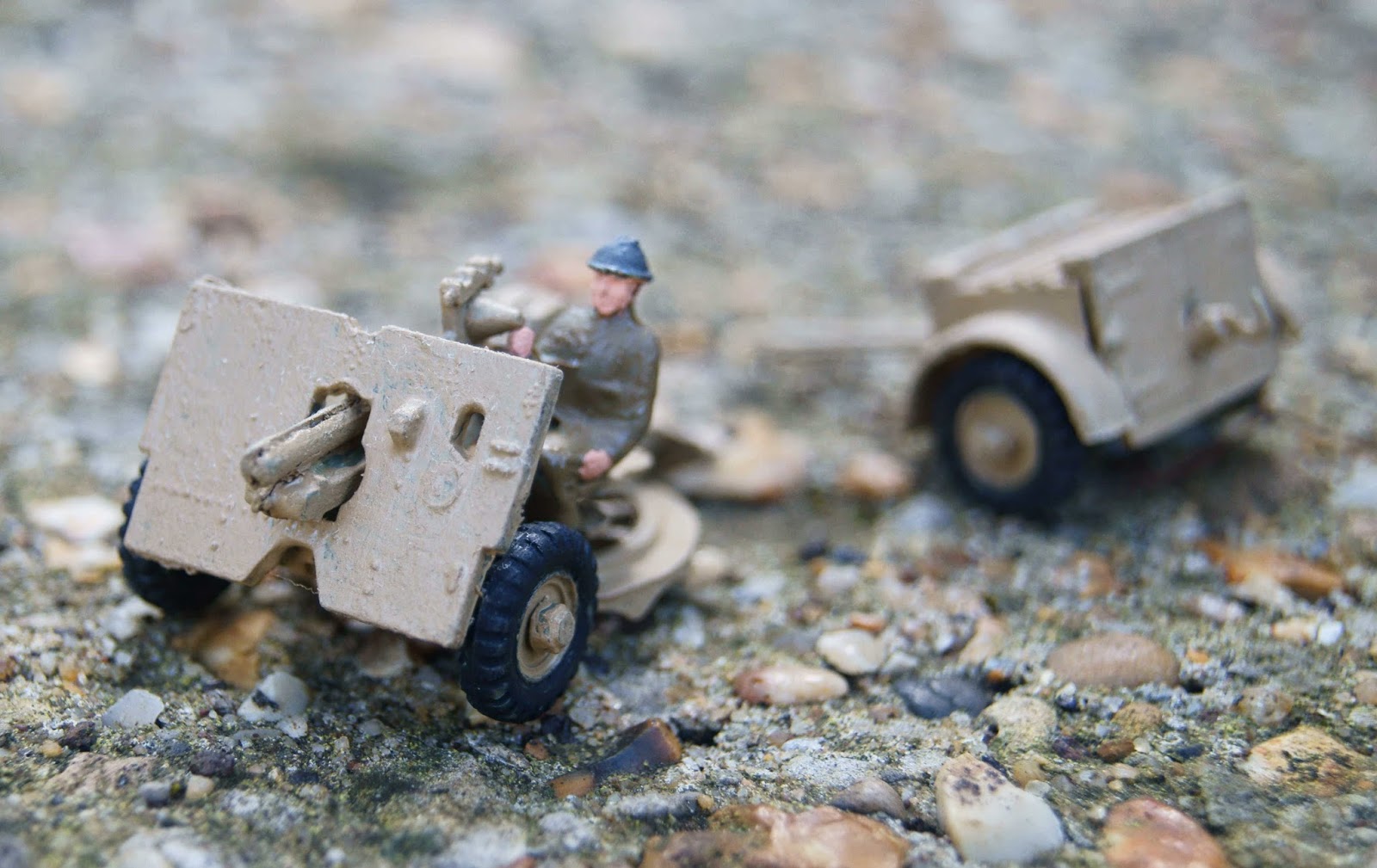