I've been keeping my eye on X-Wing by fantasy flight games for some time now and today I finally got the chance to play it.  I love Star Wars (as anyone who has seen my series on my Star Wars Miniatures collection will know) and have long hankered for a good starship battle game.  I have a large collection of starship minis from the Star Wars Miniatures: Starship battles game (coming to a post near you soon), but the game was weak and never became a permanent fixture in our gaming schedule, I was hoping that X-Wing would prove to be a lot better.

My friend turned up with several boxes of ships in little plastic boxes.  I was surprised with the good quality of the pre-paints, but they do look a little fragile, certainly better than my own collection of ships though.  We played two games, an initial intro game in which I fielded two tie-fighters vs an X-wing (a win for me!) and then a larger 100pt game, with me again taking the Imperials (a loss this time, but quite close) My Ties about to shoot down an X-wing

Our first game was very quick, on the first turn we zoomed across the table, then the second turn I advanced my Ties very slowly as my opponent hair-pinned his X-wing expecting me to overshoot him and leave him shooting at my aft.  Unfortunately it worked the other way round and my ties were now just behind him!  The game didn't last long after that.

We then moved onto a proper battle with 100pts each.  I kept it simple by taking 4 Ties and a Tie advanced piloted by Darth Vader, my opponent fielded an X-wing, piloted by Wedge Antillies, a Y-wing and a HWK-290 piloted by Kyle Katarn. 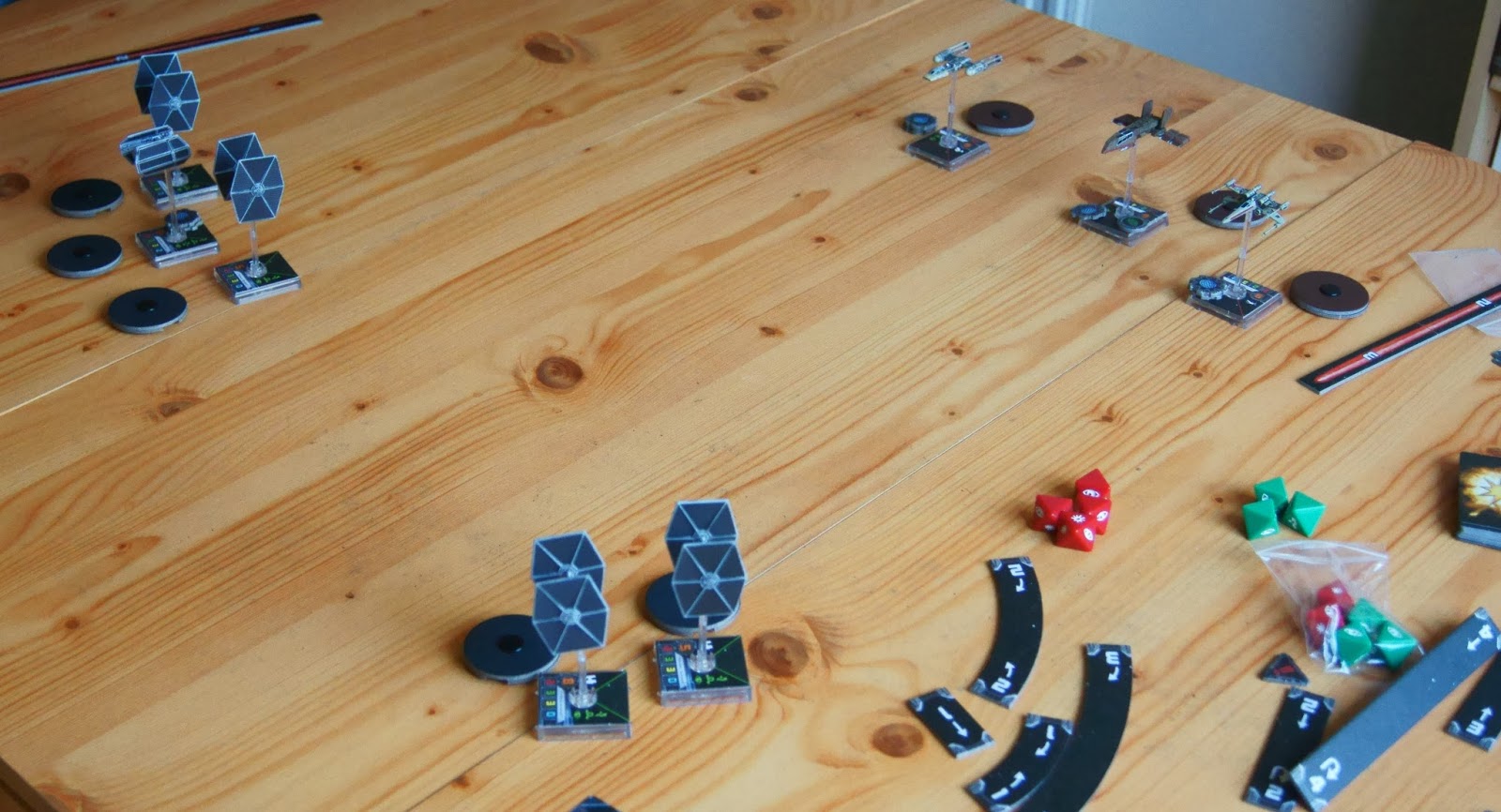 I split my force into two groups with an intent to outflank my outnumbered opponent.  All seemed to be going well at first, my main group of Vader and two ties outflanked the Y-wing and Katarn and the other two ties drew Wedge away from the main group.  It then turned out that Katarn and the Y-wing had turrets that could fire 360 degrees and therefore weren't that bothered by their bad positioning, they also had a lot of hull points to soak up damage with, although they weren't dishing out any real damage in return.  Wedge however made short work of the two ties before coming round and taking out everyone else.  Wedge Antillies is very good and killed all five of my ships!  With hindsight I should have done everything I could to take out wedge first before harrying the other two ships. 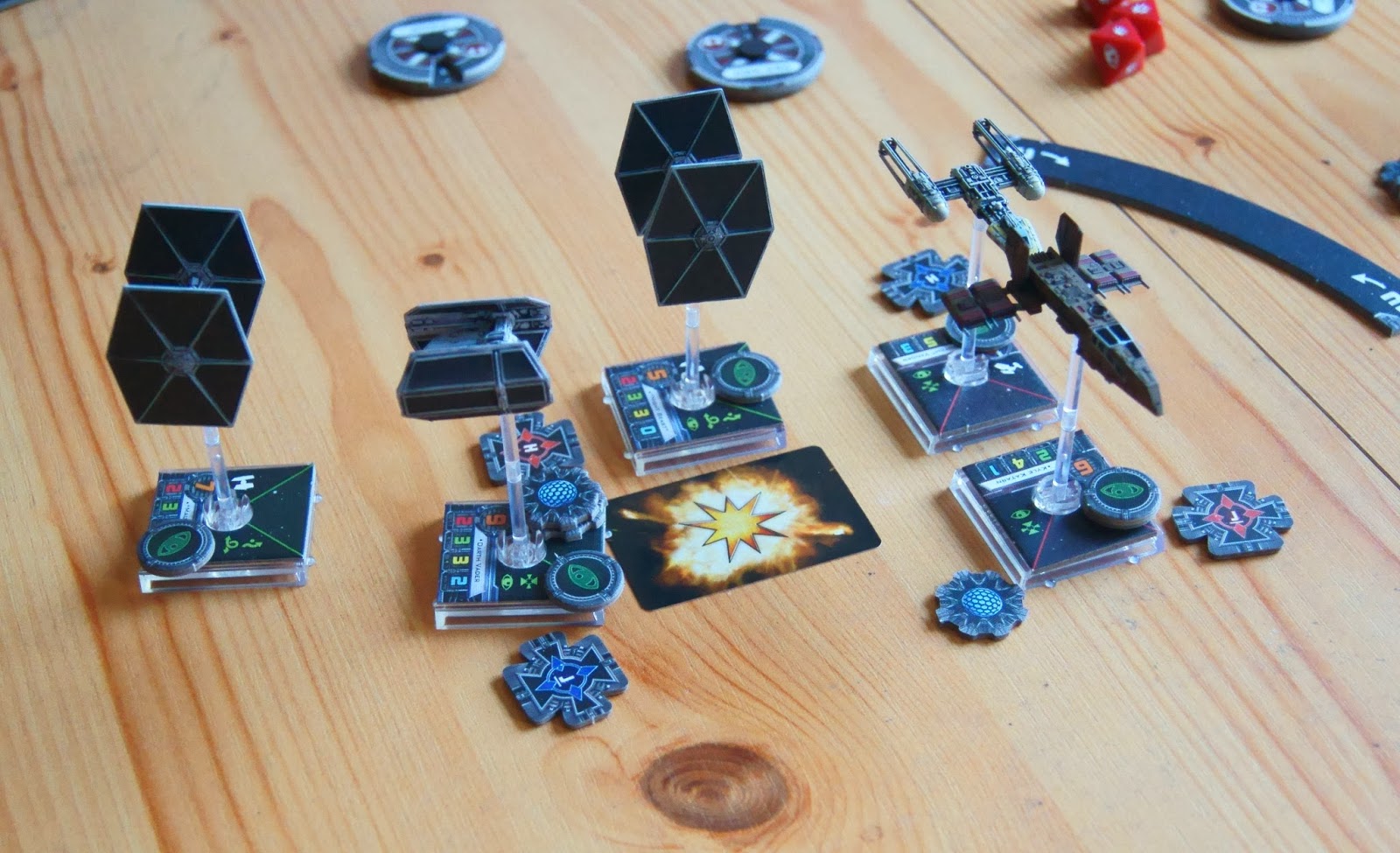 This is ultimately a game about movement, there is synergy and card play as well, but outmanoeuvre your opponent and you will win.  It's done in such a fantastic way as well.  This is the first game that I've seen that's managed to get simultaneous movement to work well.  At the start of the turn you secretly set your movement wheel on each ship showing at what angle and how far you will be going (different ships can do different manoeuvres), you then flip these wheels over in initiative order and move the ships along the set course.  It's simple but makes the game tactically deep, you have to really think about what move you want to make whilst taking into account what your opponent might or might not do.  Some times you get it spectacularly right and it's great, but inevitably you can make some real screw ups too.

- too many tokens clutter the board
- turrets on ships with 360 degree fire which took away the need to manoeuvre on some ships
- too easy to knock something when placement is so vital
- it doesn't come with a mat, my fake pine table didn't have the right ambiance

Overall I think it's a pretty solid little game and I can't wait to play some more.
Posted by brownk29 at 22:14:00