My monthly look at the two wargaming magazines I subscribe too, lets see what march has to offer.....﻿ 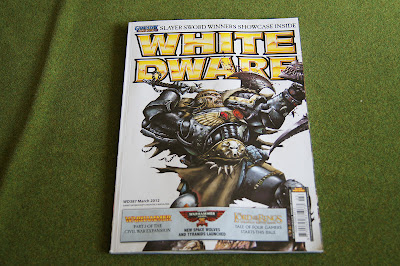 As always we'll start with white dwarf, this months mag is dominated by 40k, focusing on the new tyranid and space wolf releases.  Yet again no real design notes which is a shame and we get the rules for the tervigon and tyrannofex taken straight from the codex (something I'm not a fan of, if I play 'nids I'll have the book and if I don't it's not much use to me, also it just seems lazy to reprint something rather than bother to recreate new material).  There is a tervigon painting guide that's pretty good though.  The single warhammer article is the conclusion of the civil war expansion, which is useful, but I'd have liked a bit more for the system.  Lord of the Rings inevitably also continues its comeback, with a mini battle report (and another scenario reprinted form one of the new sourcebooks) amd the start of a new 'tale of four gamers' series, a series I've liked from the beginning (which was a loooong time ago now) and I'm glad to see it return.  The mag is topped up by a rather poor standard bearer, a new induction into the hall of fame and a fantasic showcase of last years slayer sowrd winners from around the world.  So in the end a few good bits, but quite a lot of what feels like filler too. 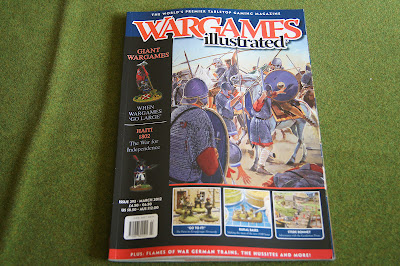 This months theme in wargames illustrated is 'giant wargames', which is three articles showcasing well giant wargames of dettingen, a roman wargame in germania and chancellorsvillie.  The articles are ok, but its very loose as a theme.  Other articles include german armoured tarins for flames of war, the french foreign legion in sub saharan africa, haiti's war of independence, a great warriors feature on the hussites and a small article on playing napoleonic skirmish games.  A average issuse all round, it's not bad as such, just doesn't grab you.