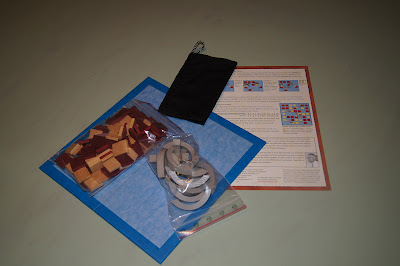 I picked this up a while ago in The Works as a random impulse purchase.  It's a boardgame in what I believe is called the 'eurogame style'  which to my mind (possibly wrong I'm no expert on this) means it has wooden playing pieces, a civilian theme and no dice. (EDIT: I'm reliably informed that eurogames can have dice)

The game is a two player game and the aim of which is to create a series of islands connected by bridges.  You get no points for islands themselves only for connections.  Gameplay is very simple you take it in turns to place either two island squares of your colour or one bridge conecting two of your island pieces.  Bridges can only be placed so that they only cross open spaces.  Thats about it really, the game continues until neither player can play any more, you then total up the scores, the longer the chain of connected islands the more points you get.  It sounds simplistic and well, it is, but it works really well and provides a lot of choices with what to do on your tun.  You often have the choice of attempting to block your opponent or trying to establish your own island chain (essentially to attack or defend).  Playing it feels similar to playing 'Go' but it's a lot smaller in scale and takes a lot less time (we were playing games in around 20-30mins).

The components are all a little basic but do the job absolutely fine.  You get a board (with a nice edge round it which helps keep the pieces in place, wooden tiles and bridges, a bag to put them in and a double sided piece of paper with the rules on.

The other thing of note is the opening mechanic which I absolutely love;  The oldest player places two island tiles and then the other player then choses weather he will play with those pieces as his turn, or plays with the other pieces.  It's fantastic and I'm not sure yet what the best move with the starting pieces is.  Play too well and your opponent gets a head start and play too badly and you harm yourself.

I like this game a lot, it fills a nice 2-player slot that my boardgame collection isn't great on, doesn't take too long and provides real decisions.  If you see this at a good price I reccomend you buy it.