The closest delivery ever for my two subscriptions, but Wargames Illustrated still came first, but only by a single day. 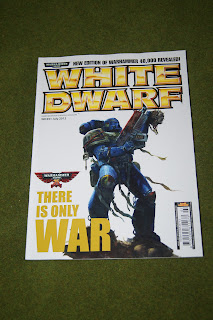 White Dwarf is dominated by the new 40k release, so much in fact warhammer fantasy gets a mere two pages and LOTR gets nothing at all.  If you're not interested in 40K don't even think about buying this issuse.  So assuming you like 40K is it any good? Well you start off with the new releases section showing the new book and various new templates/cards/dice you can buy.  Next is what passes for the design notes article, it mentions a few of the changes (like allies, fortifications, flyers and warlords), but doesn't tell you why they changed anything except for a vauge intention to make it more 'cinematic' and narrative driven.  I'm holding off judgement on the new edition till I've played it a bit, and that probaly won't be till the new boxed set comes out.  Next comes my favorite bit, no less than 22 examples of real players 40K armies, theres some inspriational stuff here and I particulary like the Imperial Gaurd army made with added empire parts from fantasy.  There's also a couple of brief battle reports and one of the new painting guides that I'm not keen on for the tau.  The final 40K article is a guide for using the new pyschic powers with existing armies, dull but definatly useful.  And finally Jervis has gone walkies and Jeremy Vetcock steps into standard bearer, it makes a nice change as Jervis seems to have been getting a bit stale of late.
In conclusion, this is an OK issuse, if they'd have bothered with a proper design  notes article it would have even been good, but alas. 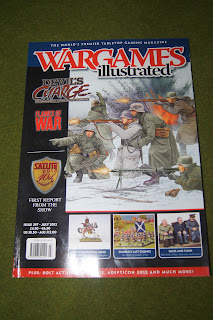 This months theme in Wargames Illustrated is the new flames of war expansion 'devil's charge' about the battle of the bulge in 1944.  The theme only gets two articles, a complicated 3 table scenario for Peipers charge and then a battle report showcasing the scenario.  Its a large game and it'd be a while before my fledgling force could give it a go!  They seemed to have crammed a lot of other stuff into this issuse (maybe it feels that way because of the small theme), two small show reports from salute and adepticon (They sat there will be more from salute next issuse), I've also decided I really need to try and get to salute next year.  Two hobby articles, one on how to paint faces and another on how to photograph miniatures, you never know there might be an improvement in photograpy around here as a result.  Then of course there are the other historical articles this month featuring the battle of falkirk 1746 (carrying on from last months theme), the Illyrian revolt of 6AD, early post independence US-Indian wars, and the Boshin war at the start of Imperial Japan.  And finally a look at the new bolt action 28mm WW2 game from warlord games, which admitedly looks interesting, but I'm trying to ignore it a bit as I might be tempted and I've alredy started collecting WW2 in 15mm, and theres no way I want to start collecing periods in more than one scale.  Quite a good issue all round.