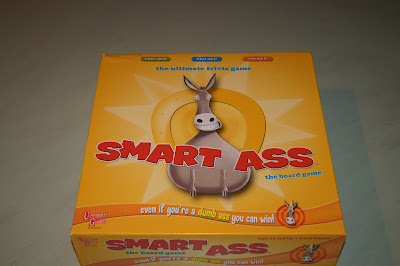 I picked this up in a sale a few weeks ago (cost £8) .  I like trivia board games and this claims to be 'the ulitimate trivia boardgame' so even though this is clearly a bold claim at that price it was hard to resist.

The game contents are simple enough, a large folding board, 4 packs of question cards (quite flimsy unfortunately), 8 playing pieces which are card donkeys pushed into little plastic holders and 2 dice, one with numbers for moving and one with colours on to slect category.  Like the cards the dice are lightweight and don't have that quality feel to them.  Nonetheless it all does its job. 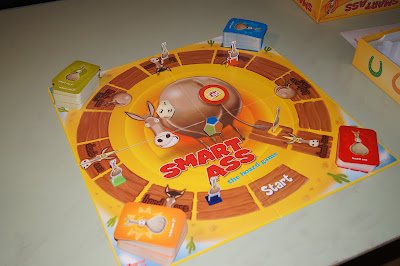 The gameplay is very simple, players take it in turn to be the reader and select a card from a randomly determined category.  Each card contains 10 progressivly easier clues to a what? where? or who? and the other players can shout out an answer at any time and if they have it right get to roll a dice and move that many squares forward.  If nobody gets it the reader gets to move forward.  The clever bit is that each player only gets one chance to guess per card.  This means that the smart asses often guess to early and can trip up, leaving less knowlegdable players a chance to win the round.  It can be a art in picking exactly when to guess and knowing your opponents helps!   The first person to make it round the board and get into the donkeys arse wins!  Games take around 30mins, which is a good length and does make this game an alternative to the more serious and lengthy trivia games out there.

The game is described as a 2-8 player game, but this isn't really true, you need at least 3 players and preferably 4 or more.  This is because the game really works when you have poeple competing as you read down the clues.  In a 2 player game one person will always be reading and the other person effectivly gets all the clues before they have to say an answer, which makes it very easy.  In a 3 player game this is better as you normally have two poeple competing with the clues, but missing a round is quite common and you still often revert to someone getting all the clues before having to comit to an answer.

So in conclusion this is good fun, although I doubt it has that much longevity.  The 'ultimate trivia boardgame' it isn't (it will take something special to convince me away from genus edition trivial pursuit), but still worth a look if you like that kind of thing.
Posted by brownk29 at 20:31:00