This is absolutely my last post on my Star Wars miniatures collection (I promise), whilst I have already posted about all the figs used in the main game Wizards of the Coast also released a one off set of starship minis, which although part of their star wars minis line were clearly not compatible with the main range and in fact formed their own game; Starship Battles.

Of the 60 ships available in the range I actually have at least one of 59 of them (I'm only missing the droid control ship) SWM was my entire gaming life at this point and I was just buying stuff to try and complete collections, which has lead me to getting more than I could possibly need.  The game its self wasn't great and we only played it for a couple of months before mainly forgetting about it.  it wasn't a compete loss though, I do have a large collection of very cool star wars ships, and whilst X-wing is a great game for small scale dog-fighting, I always like battleship clashes, hopefully at some point I will get around to making a victory at sea mod which I can use these ships in.

The game only has two factions light side and dark side, which I've always found very odd.  The light side contains republic forces from the prequel trilogy and rebel/new republic forces from the original trilogy and just after.  The dark side forces feature the seperatists and the galactic empire.  We soon gave up this system and played either rebels/new republic vs empire or republic vs seperatists.

The ships are split into four classes, fighters, frigates/crusiers/transports etc, battleships and huges.  None of the ships are too scale and are essentially representations of a ship, or flight of ships (in the case of fighters).  Whilst it can be annoying it does allow you to field both X-wings and star destroyers on the same table. 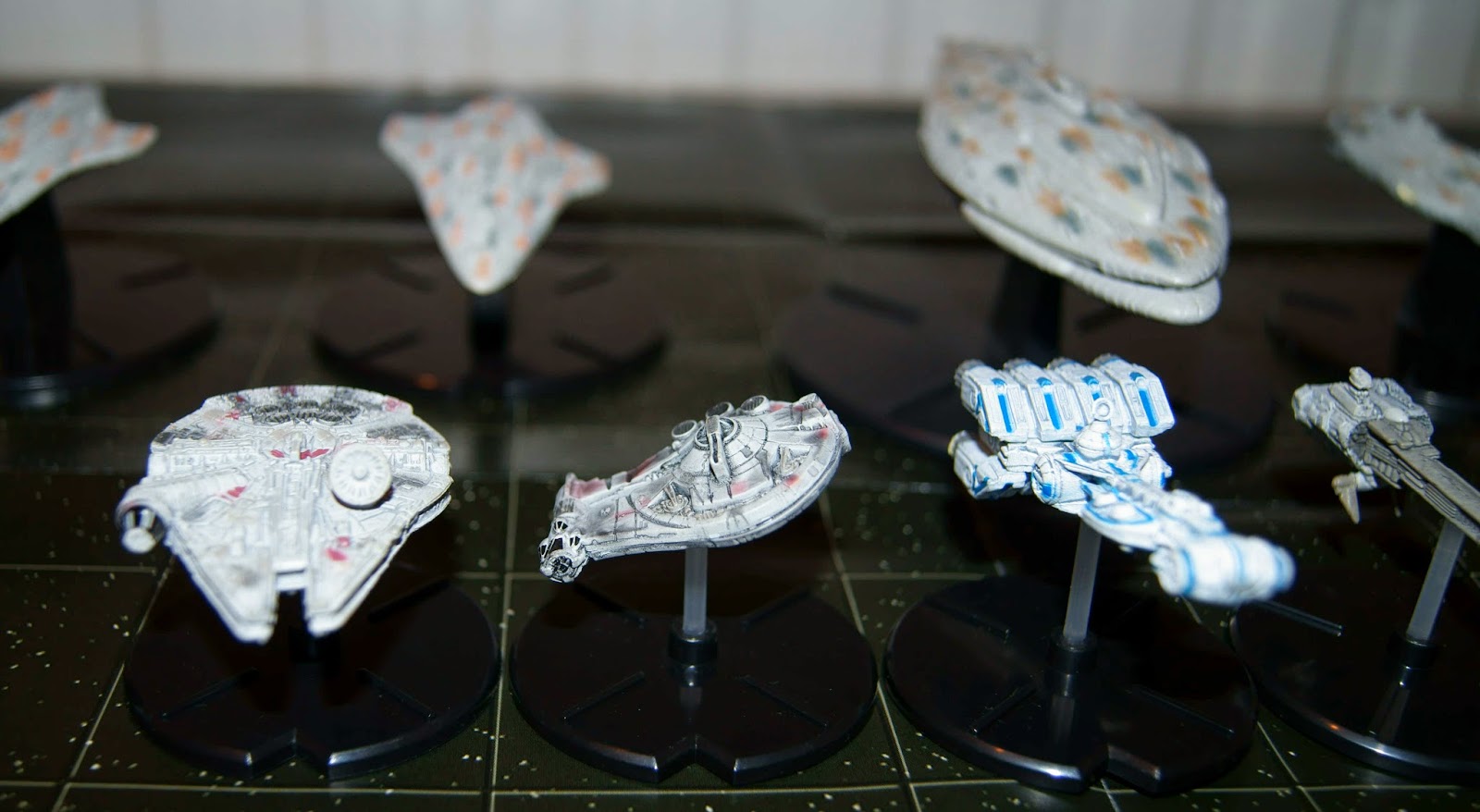 The rebellion and a huge Mon Calamari ship that was built in the early years of the new republic.  I actually have a bunch of A-wings as well, but they seemed to have missed their photo-op!  The rebels were very much king of the middle ships with the Millennium Falcon, Tantive IV and the Nebulon-B frigates.

The Imperial fleet has a lot less variety, but star destroyers are very good!

These few ships didn't quite fit into any of the categories 100%, but wild card and the two versions of slave 1 were useful ships nonetheless. 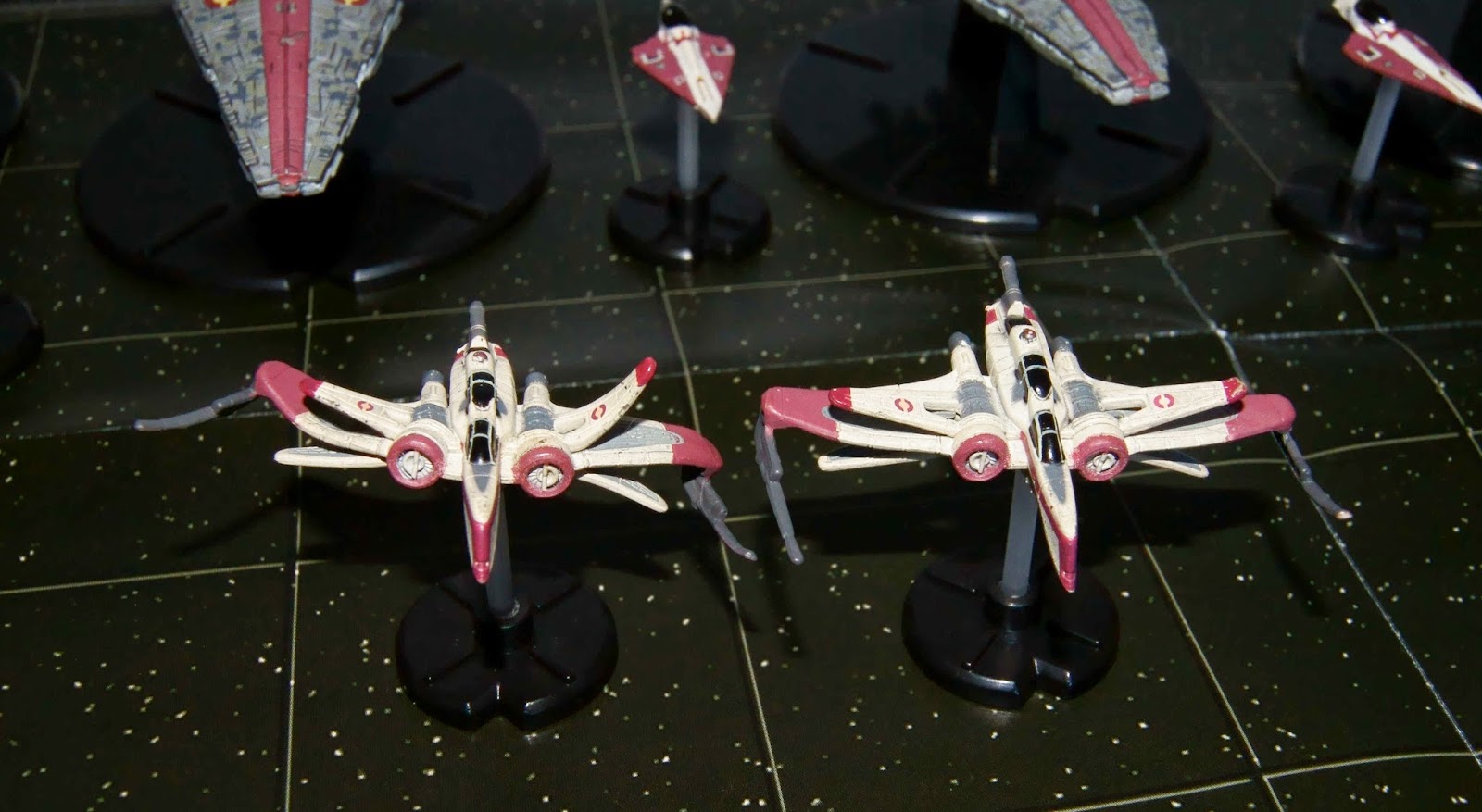 The republic fleet has quite a bit of variety and is a bit of a miss-mash of styles and abilities.  The Arc-fighter above highlights one problem with this range, occasionally the soft nature of the plastic produced figs  resulted in really bad warping and ruined minis. 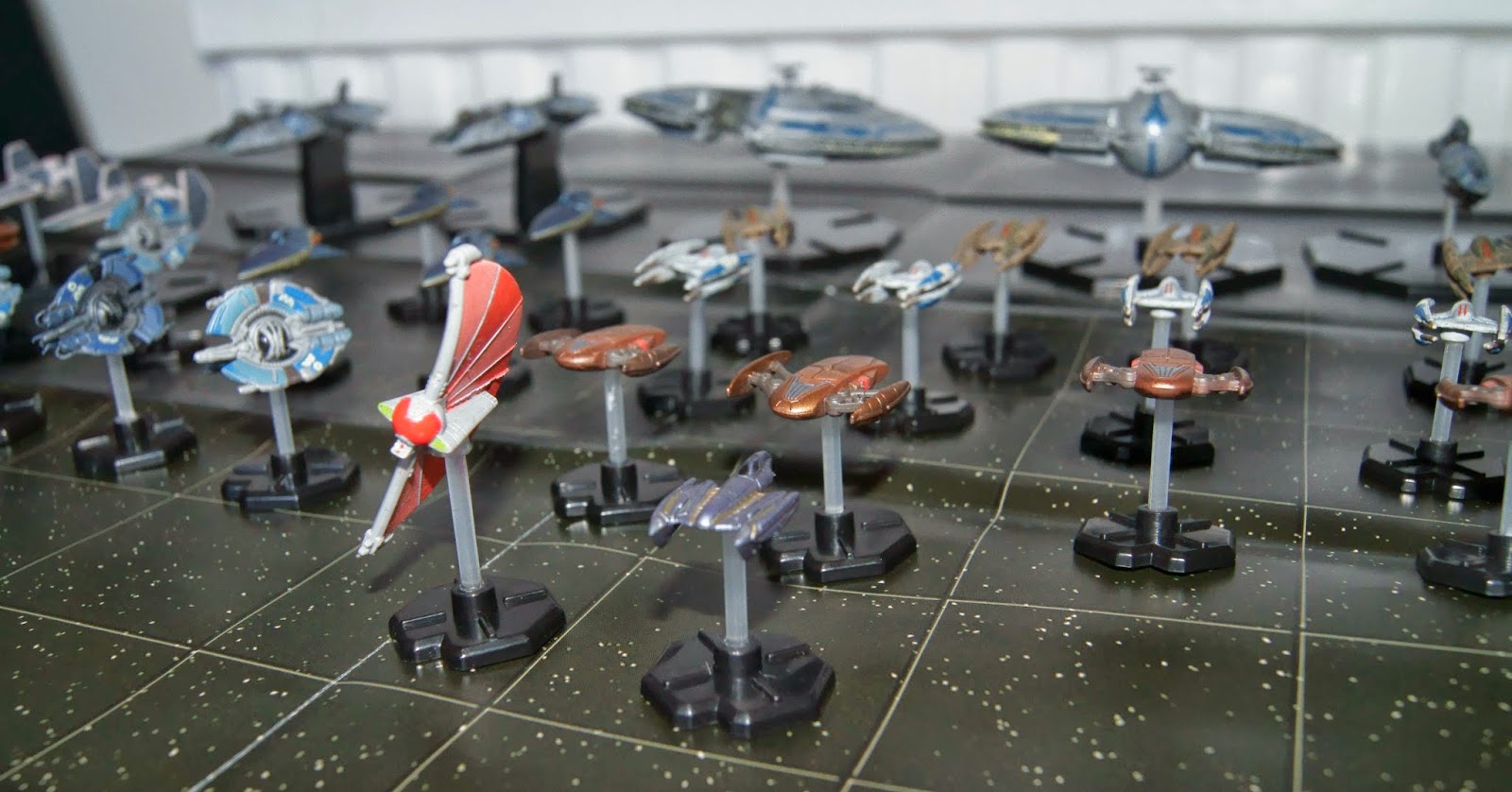 And finally we have the mostly droid fleets of the seperatists.  the droid fighters were poor, but the big capital ships packed a real punch and were tough.
Posted by brownk29 at 22:59:00