The weekend of the great storm found me in Dorset and finally making a long overdue first ever trip to the tank Museum at Bovington.  I'm sure many of my readers have been there themselves, but to those that haven't you really should make the effort, it's a fantastic place.

Bovington is the museum of the Royal tank regiment and is (according to Wikipedia) the largest collection of tanks in the world.  the main building consists of 4 areas, the tank story, the WWI experience, the discovery zone and Battlegroup Afghanistan. 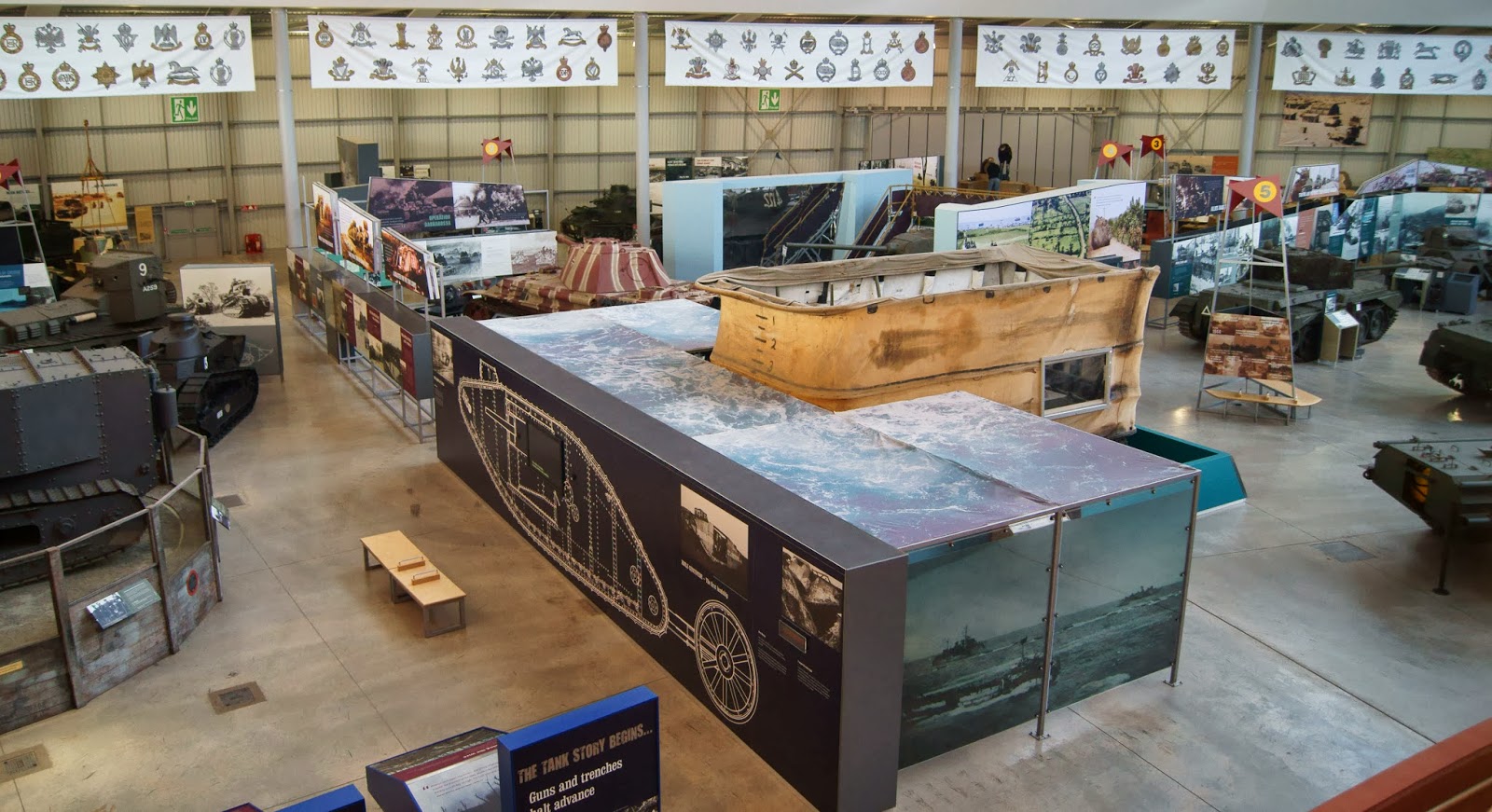 The best and most important hall is 'the tank story' which traces the history of the tank all the way from 'little willie' in 1915 upto the modern day.  It includes tanks from WW1 (a mark II, a whippet, and a FT-17) before moving into the interwar period and then of course into WW2.  The WW2 section includes the worlds last surviving working Tiger tank.  There was a chap doing maintenance and he let us climb up on top of the tank to have  look at the engine and inside the turret, which was a nice surprise.  There is also some cold war tanks and a couple of modern ones.  It's quite open plan and it's well done with lots of great information about the vehicles and about the development of the tank in general.  It's about as good an overview of the subject as you could get from a gallery. 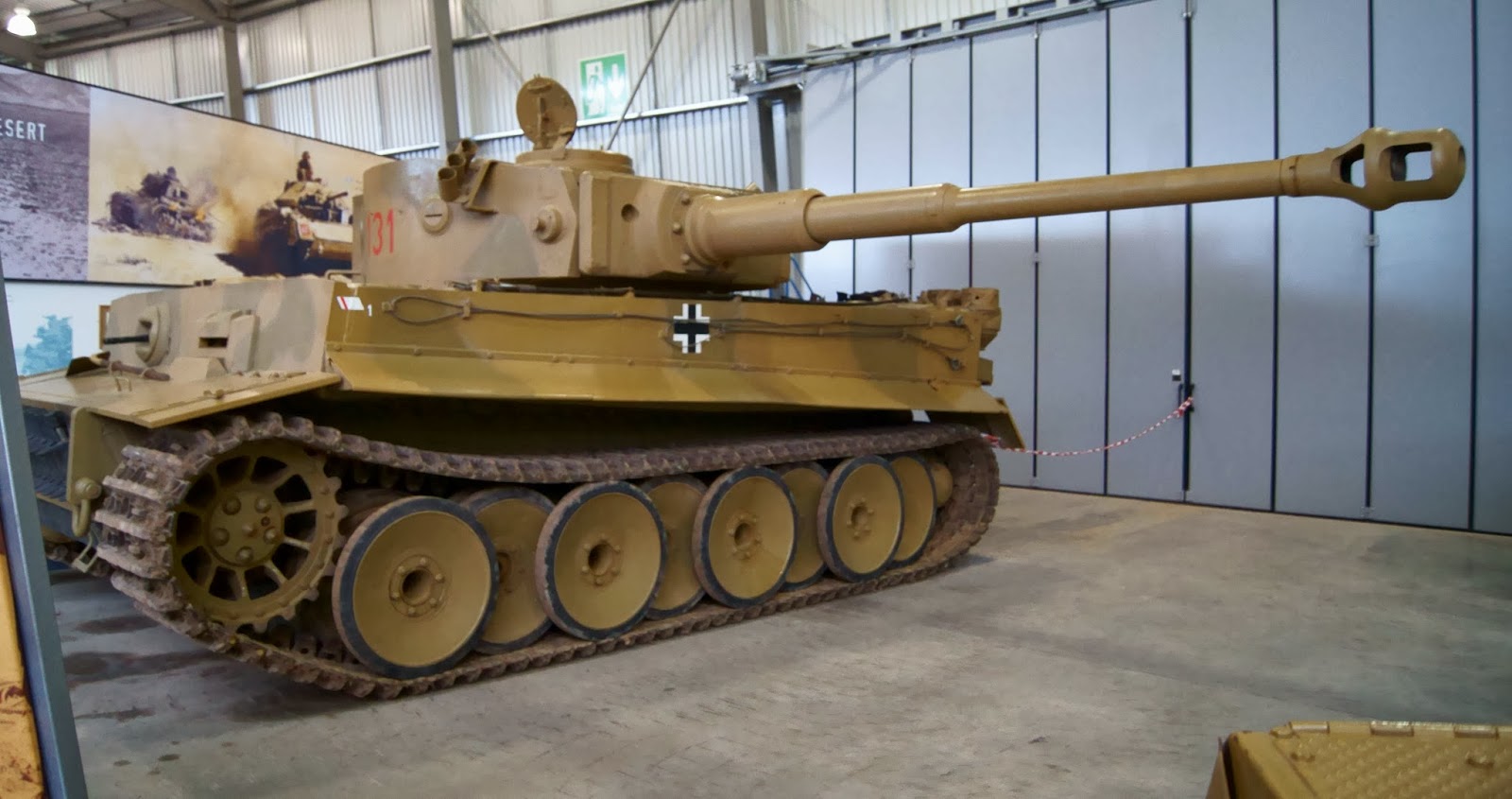 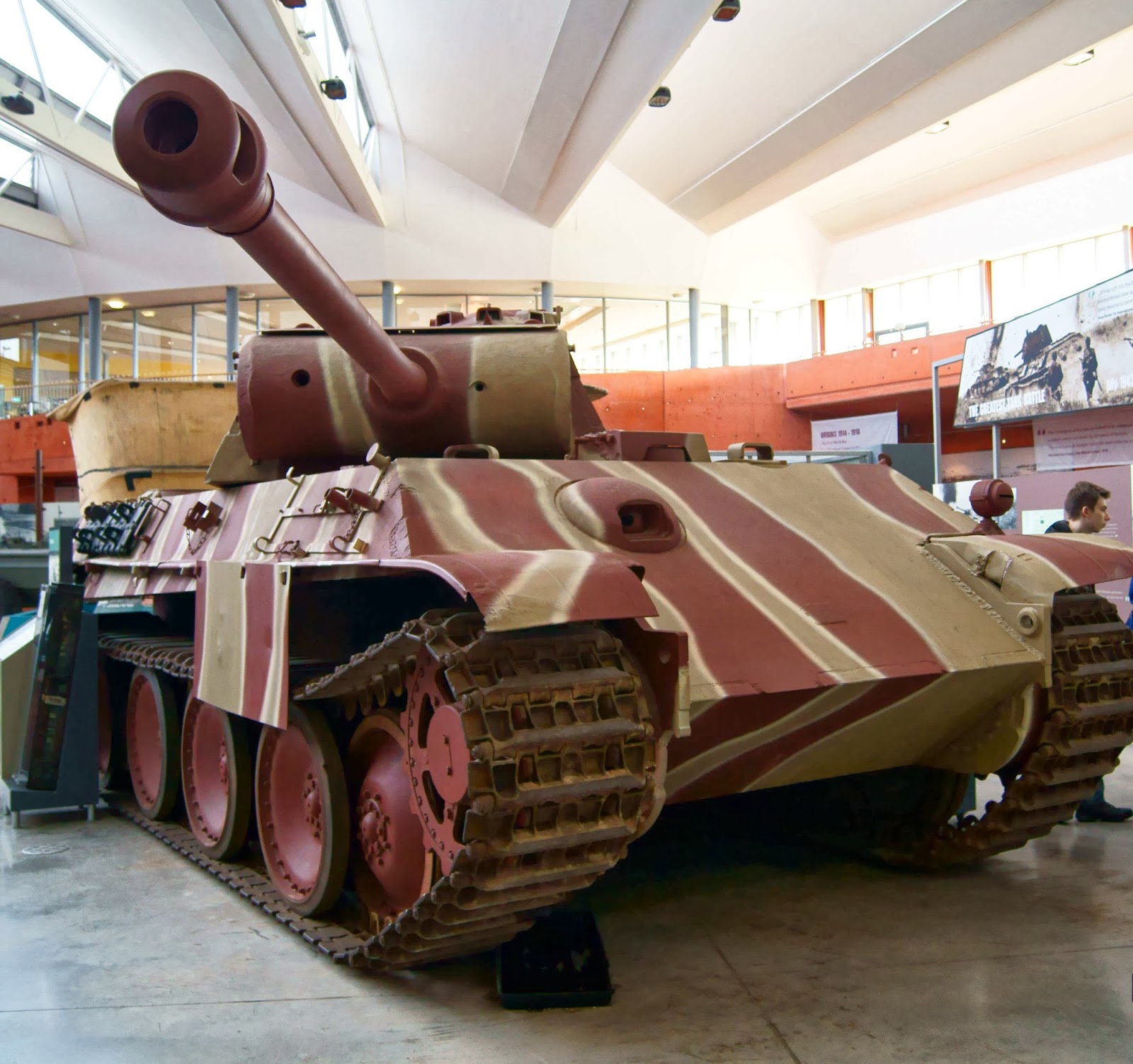 Next we headed into the WWI hall.  It starts off with a mock up of a trench scene, starting in a damaged town, then a British trench and then onto a German one.  Although it was interesting seeing the differences between the British and German set-ups I have to admit I'm not a fan of these fake trenches that seem to be popular nowadays, there's no way they can really give an impression of the trenches, but perhaps I'm in the minority here and other people get something from them.  After the mock up there is a gallery of WWI tanks, which I absolutely loved!  It contains 5 different varieties of British heavy tanks (two of which you can go inside) and a German A7V. 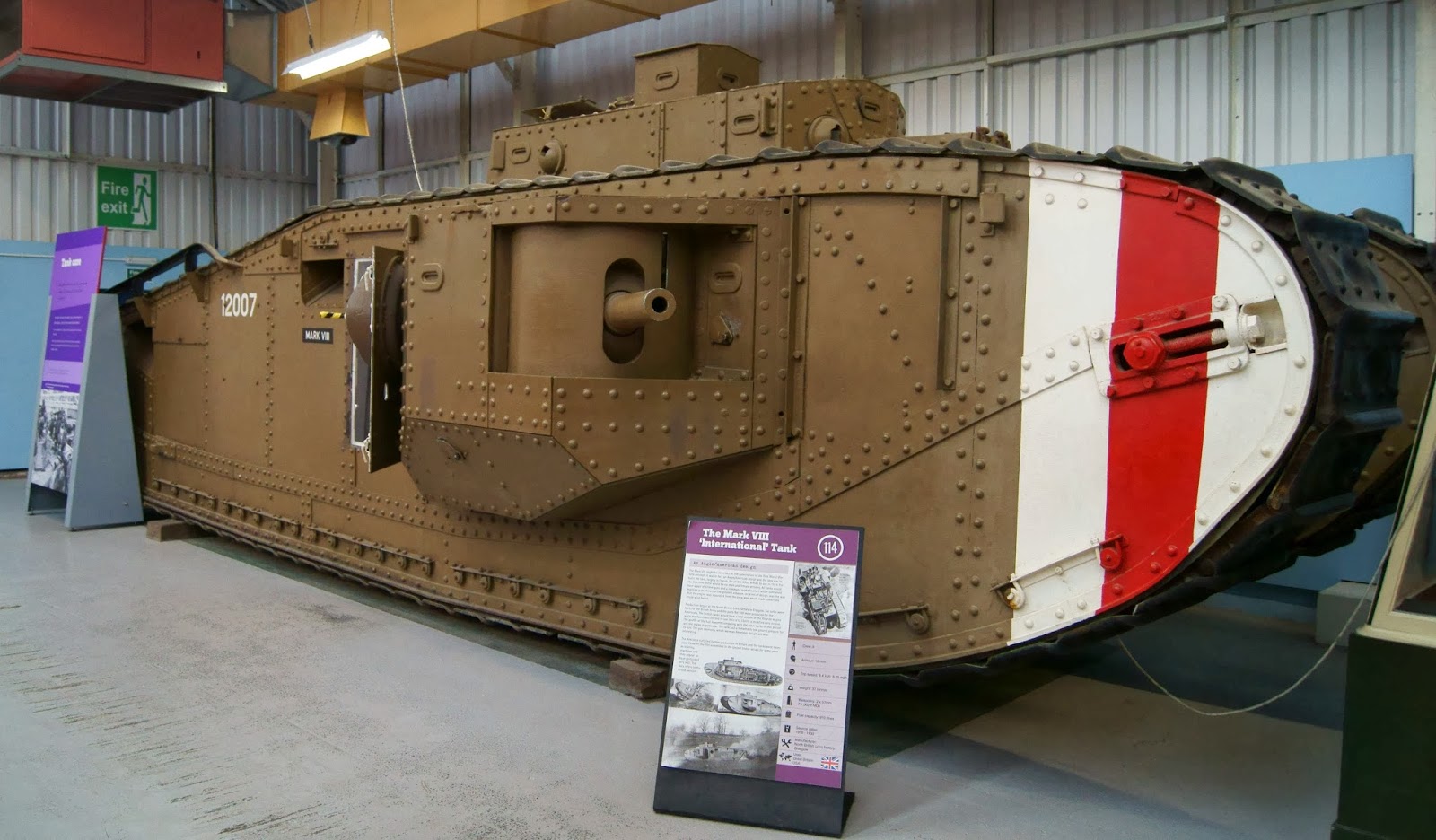 The Discovery Zone is a very large area crammed full of tanks and armoured vehicles, and I do mean crammed.   Mostly WW2 tanks, but also a good selection of postwar main battle tanks as well.  Some of the highlights included a Centurion cut in half and a King Tiger, but there's just so much there it's difficult to pick out individual tanks.  One tank that did really strike me though was the TOG II, an absolutely massive British tank prototype from WW2 that is heavier than any of the later MTB's.

The last area is Battlegroup Afghanistan, it's smaller than the other areas and gives a look at the vehicles and conditions from the recent war in Afghanistan.  Again it's very well done, the mock-up camp and multimedia information make it a nice little addition to the museum. 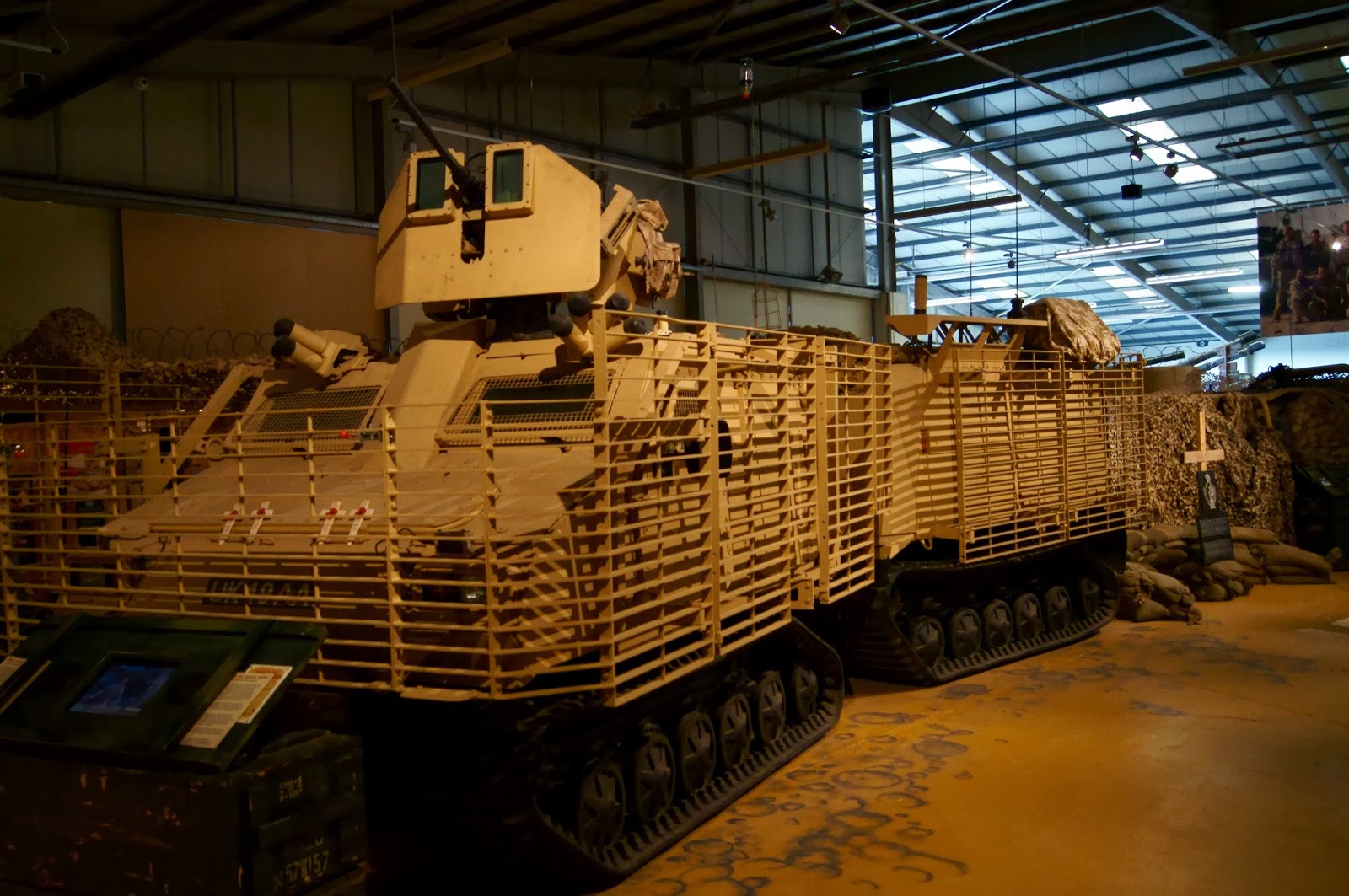 Across the car park is the vehicle conservation centre which is a large hanger which houses the overspill from the collection, tanks and armoured vehicles not on display from the main hall in varying conditions.  You can't get down in amongst them but can only view them from up on a viewing platform.  It's an impressive sight and hopefully one day they'll be able to renovate and display them all properly. 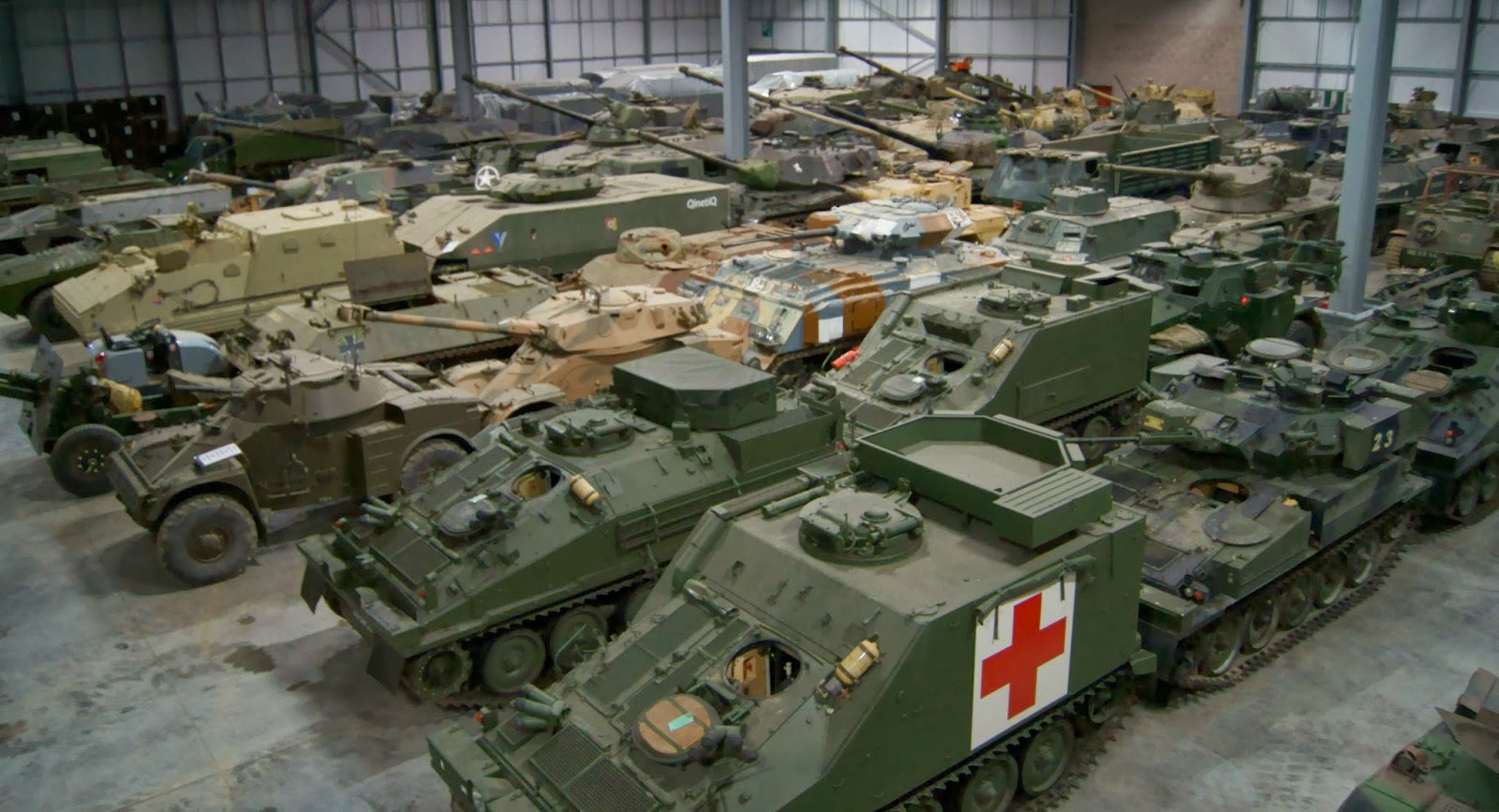 And finally I was also really impressed with the shop, lots of interesting books and a fantastic range of model kits, some manufacturers and ranges that I wasn't even aware of.  It was perhaps inevitable that I came away with a model tank, which will be appearing here in the very near future.
Posted by brownk29 at 20:32:00