Gaming and drinking only goes together so far, and after a few beers the other night me and Mike were fully aware that a proper wargame was out of the question, but we still needed something else to play.  Mike came up with an idea and suggested we play an 'Arena of Death'.  For those that don't know 'Arena of Death' was an article in an old White Dwarf (must be well over 10 years ago) that pitted the greatest lords in the warhammer world against each other in a knock-out tournament.  Idea accepted off we go to look at my collections to select 16 candidates.

We tried to spread the competing minis from different armies, and didn't have any specific requirements except the 'rule of cool' and which minis from my collection we thought we the hardest. The rules used happened to be the latest that I have in my collection, which are not necessarily those from the latest editions of the books (since the move to hardback I've not been keeping my library up to date) with a lot of the monster rules being taken from the Storm of Magic expansion. 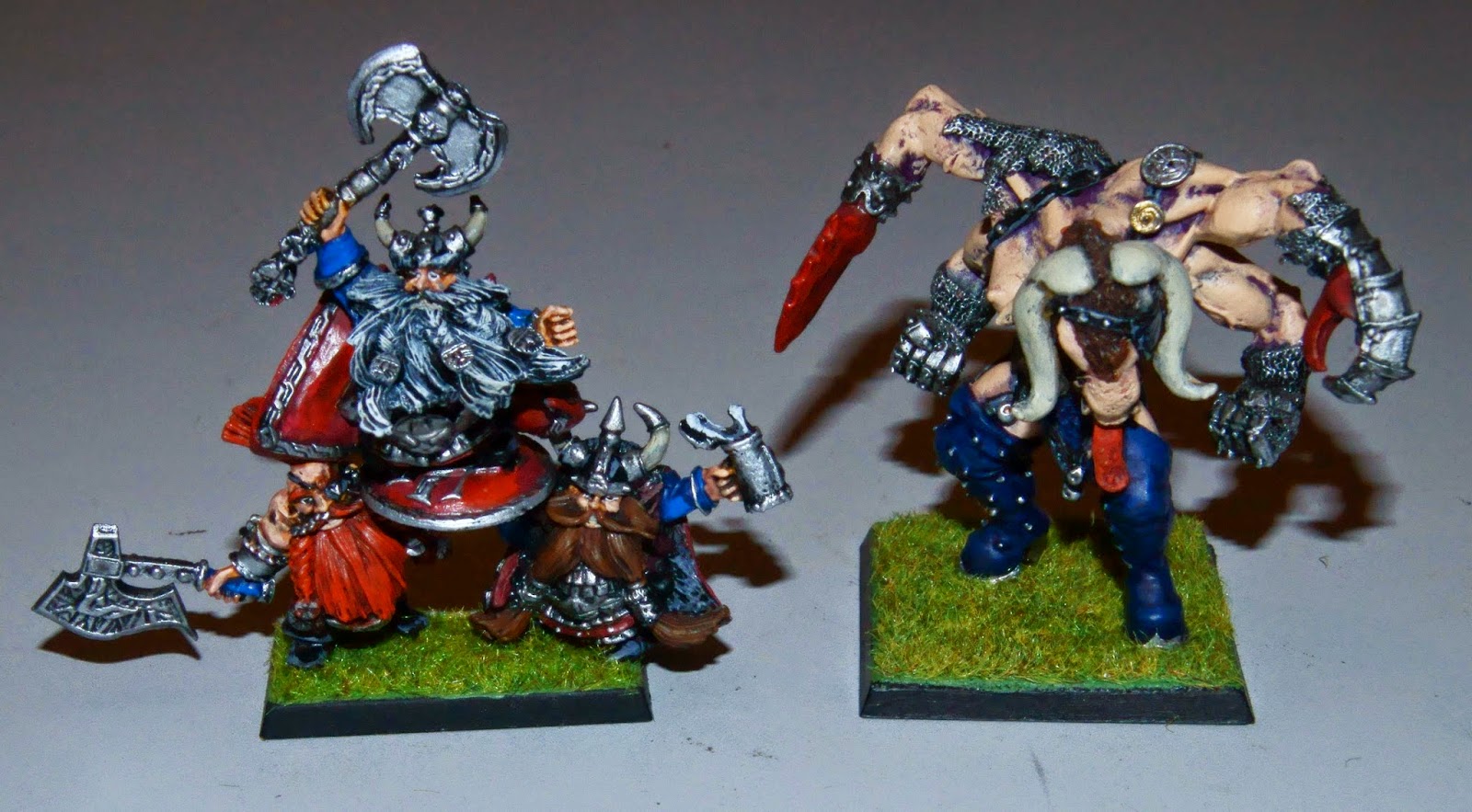 The first battle, I had high hopes for the White dwarf and mates, but an initial draw against a greater daemon made me a little wary.  I shouldn't have been though, short work was made of slaanesh's servant and the White Dwarf progresses to the next round. 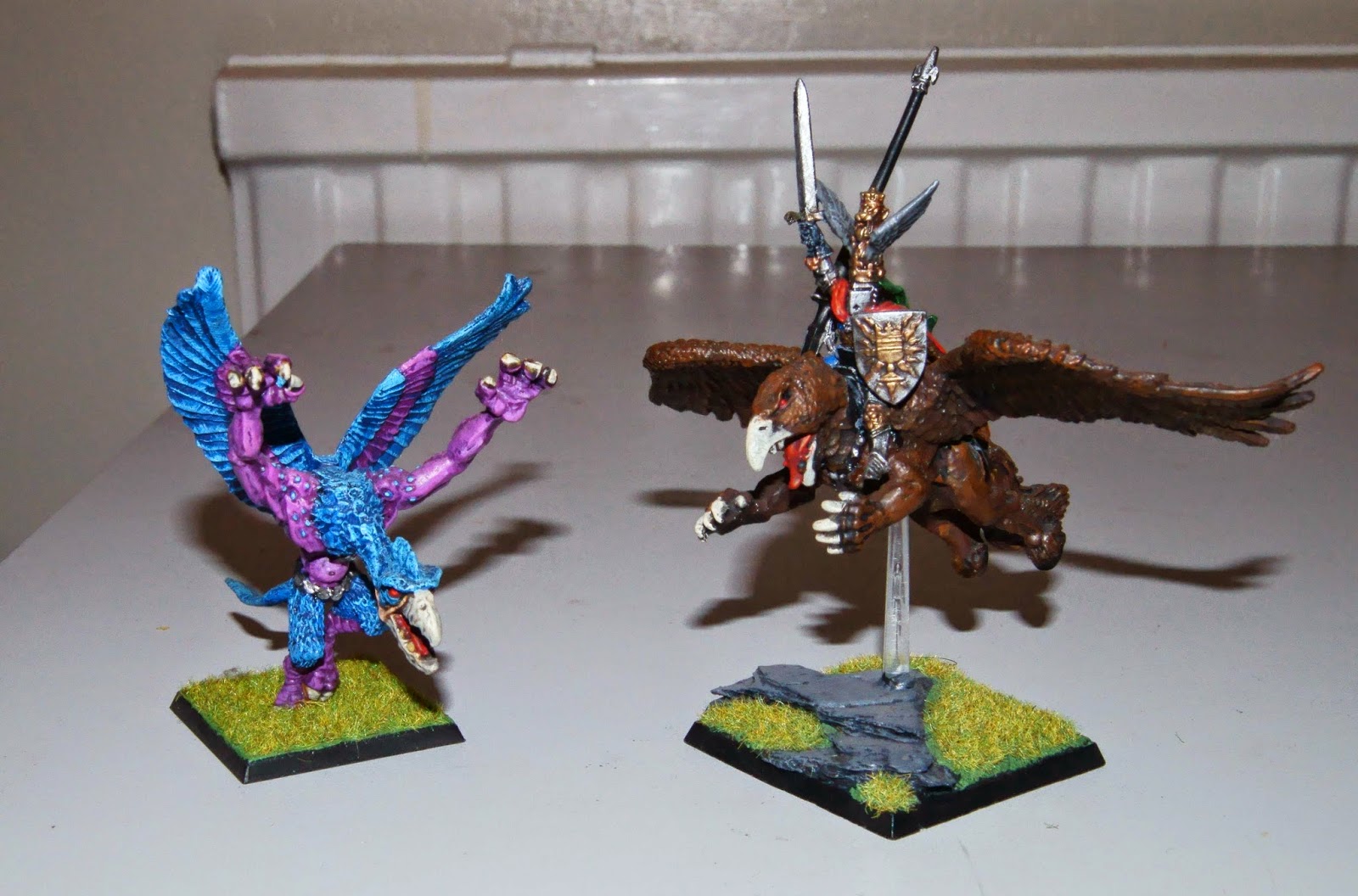 The second greater daemon this time vs the King of Bretonnia.  A bit of a surprise for us both and partly due to Mikes famous inability  to roll dice the King sailed through with an easy win! 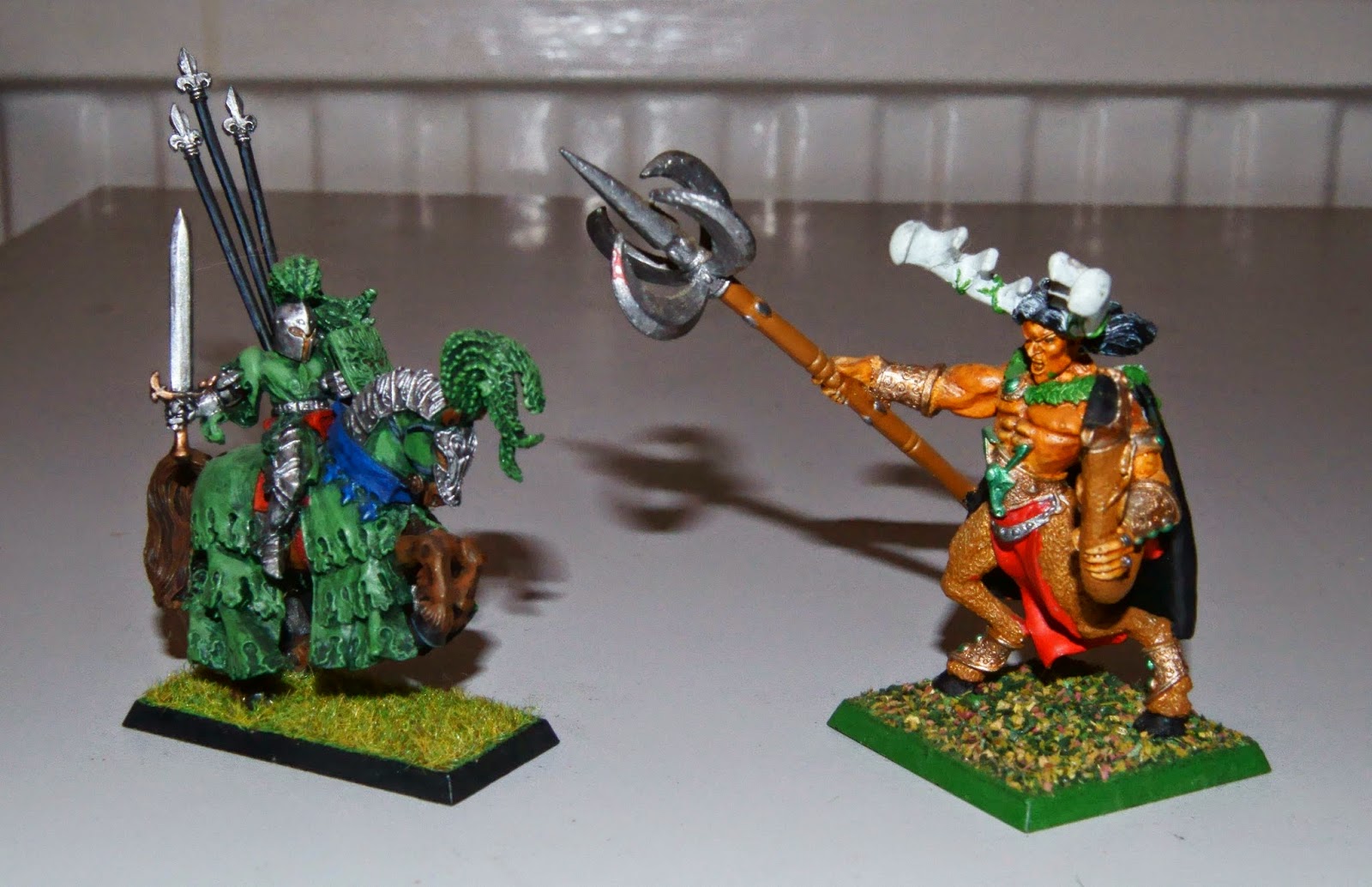 The poor Green Knight really did not stand a chance here and the avatar of the elvish God tore him to shreds. 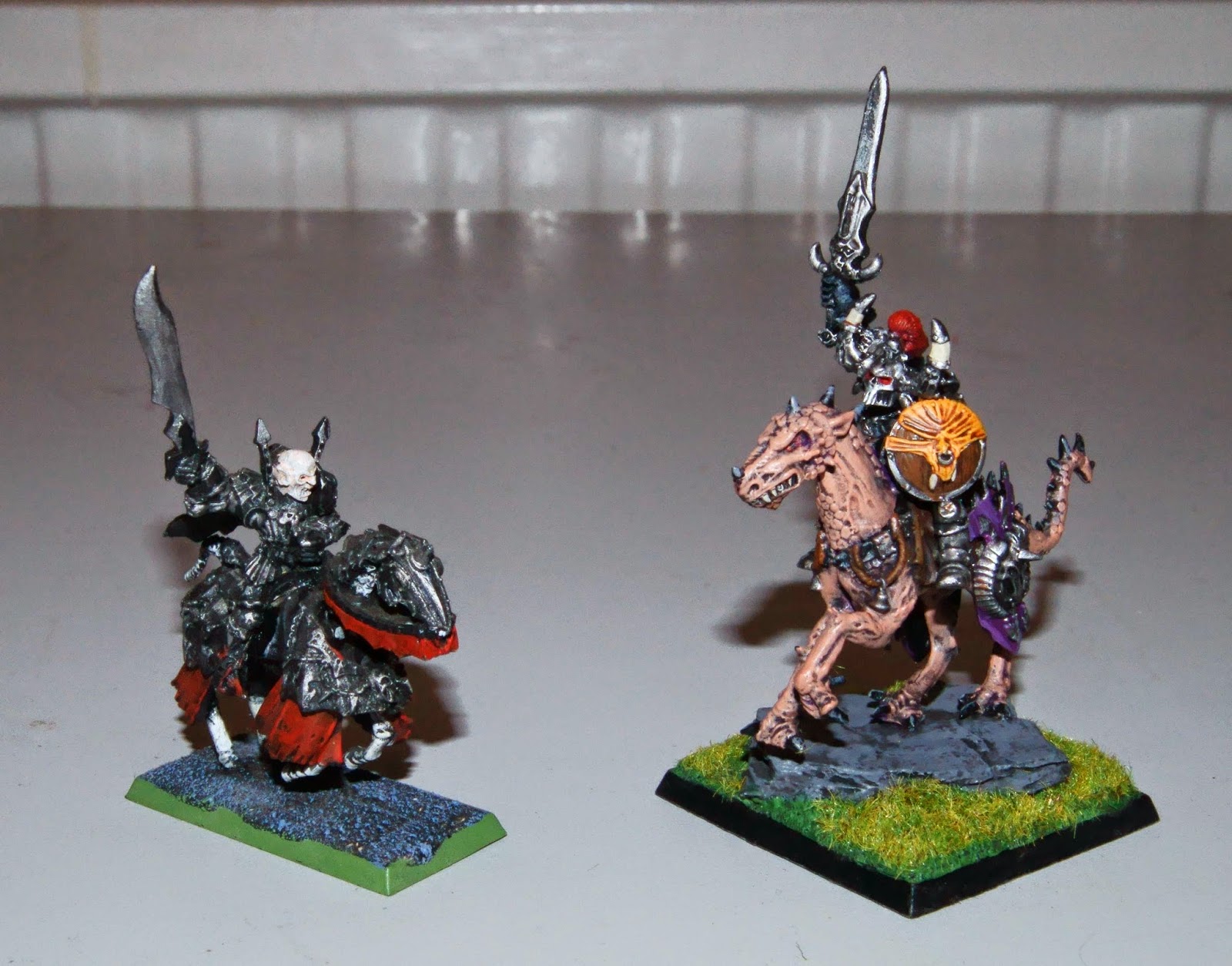 Generic Vampire lord vs the everchosen of the Chaos gods?  Win for Archaon of course!  After the defeat of both greater deamons Chaos look to have a contender here! 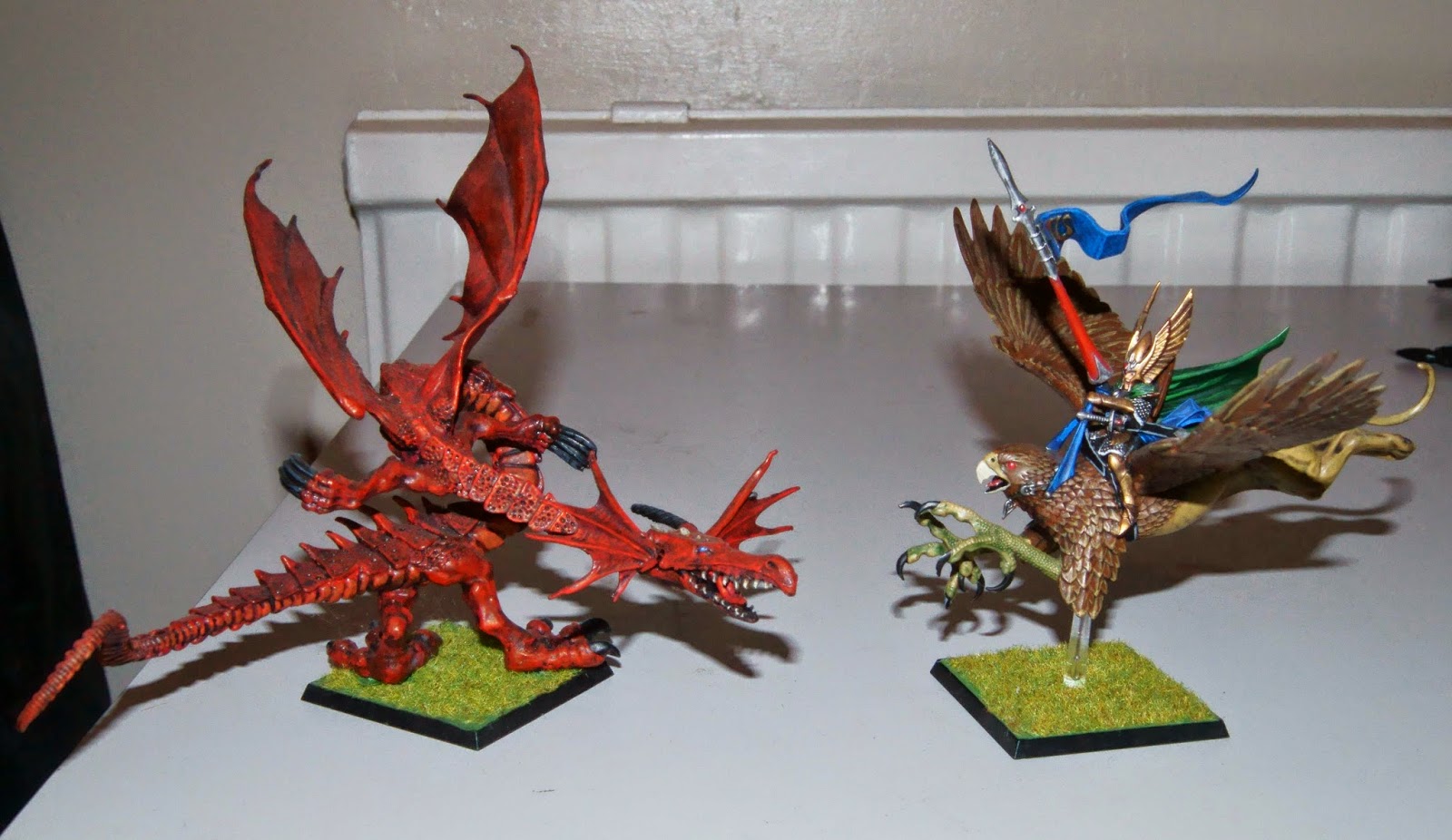 Another foregone conclusion here, the valiant Elf prince soon met his doom down the throat of the Emperor Dragon. 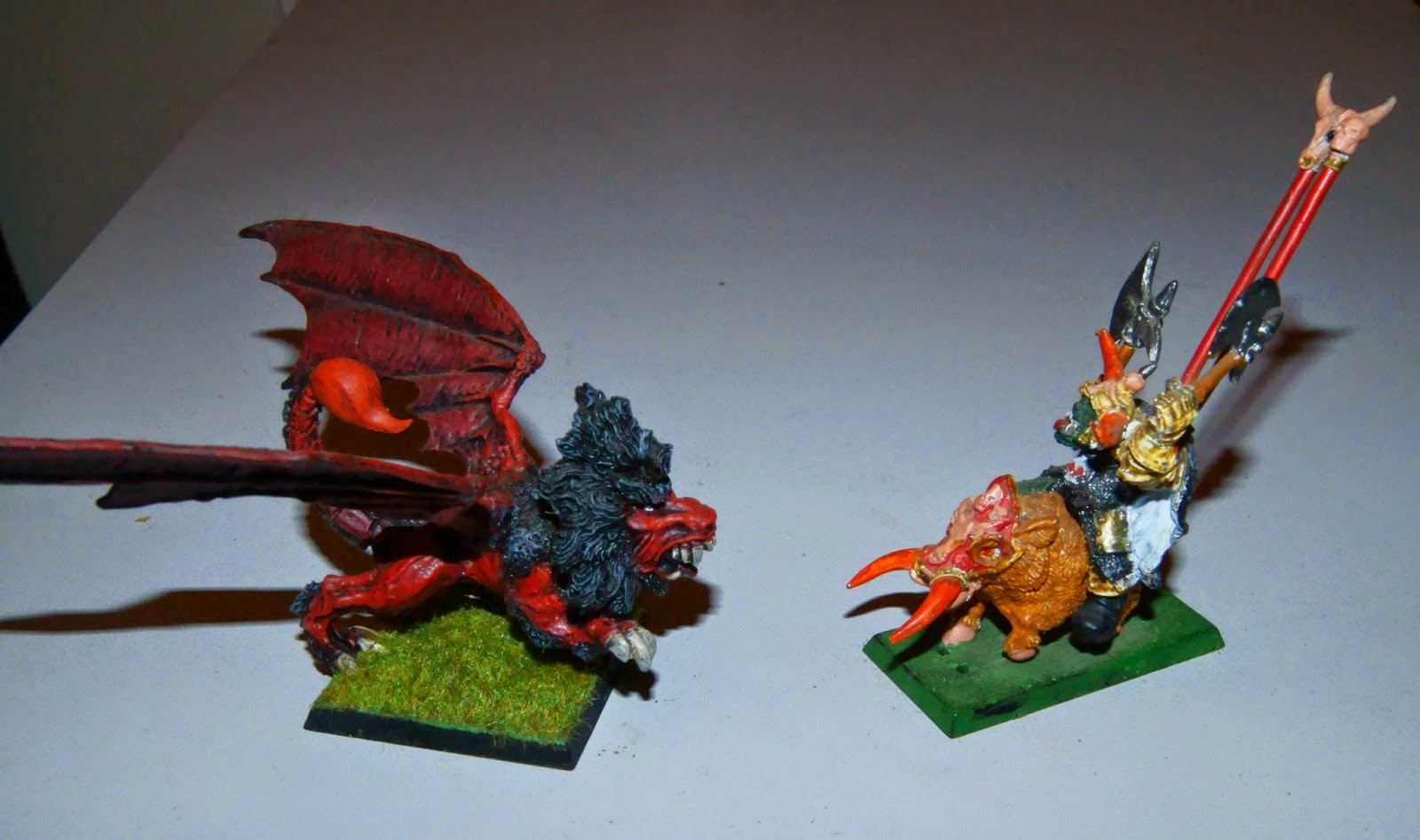 The closet match of the round this one was going down to a single wound on each side, but ultimately the Manticore got the win. 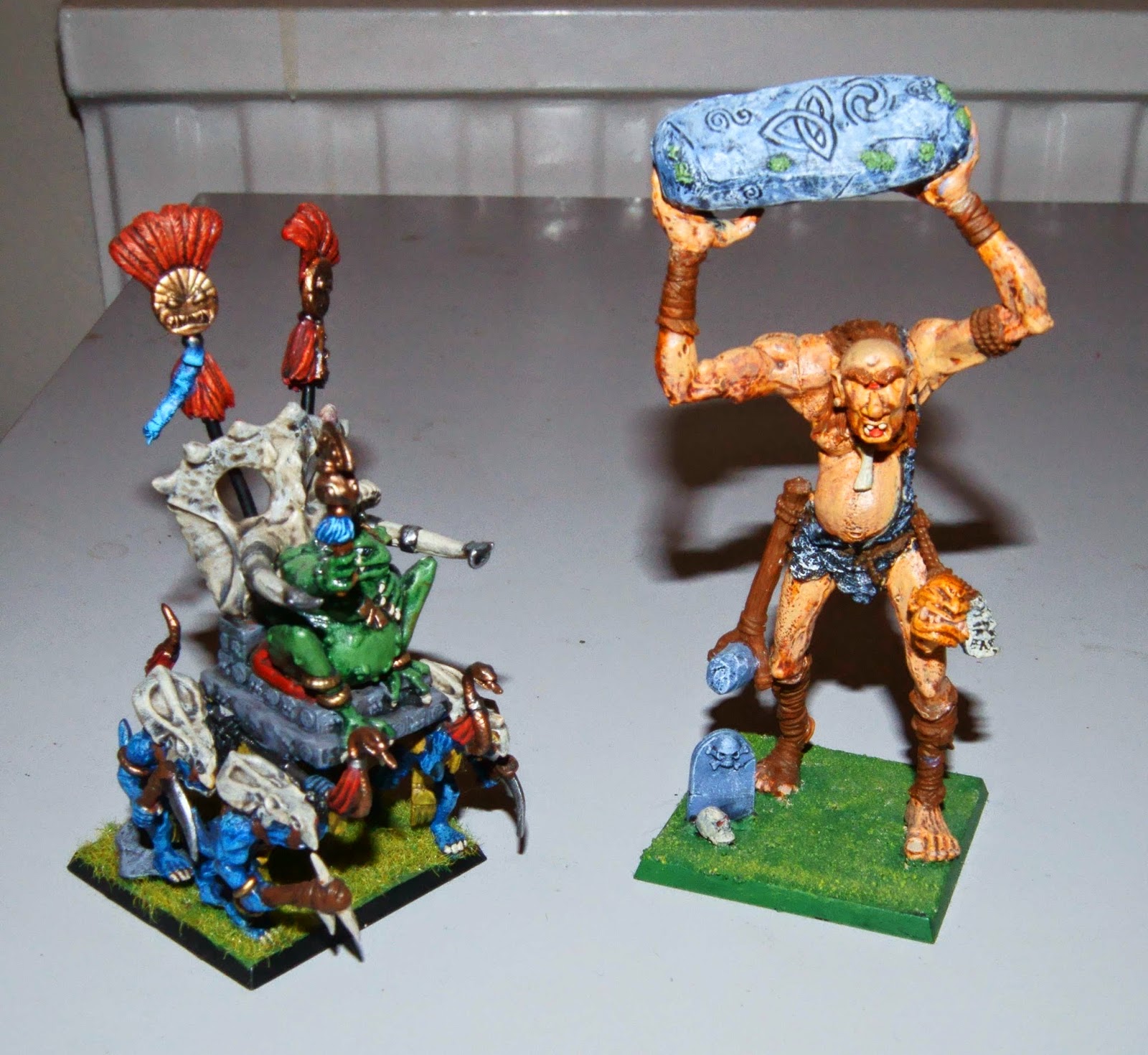 Well this was short, the Giant clubbing the Slann over the head and making mincemeat of him, in retrospect the Slann probably shouldn't have made it into the competition. 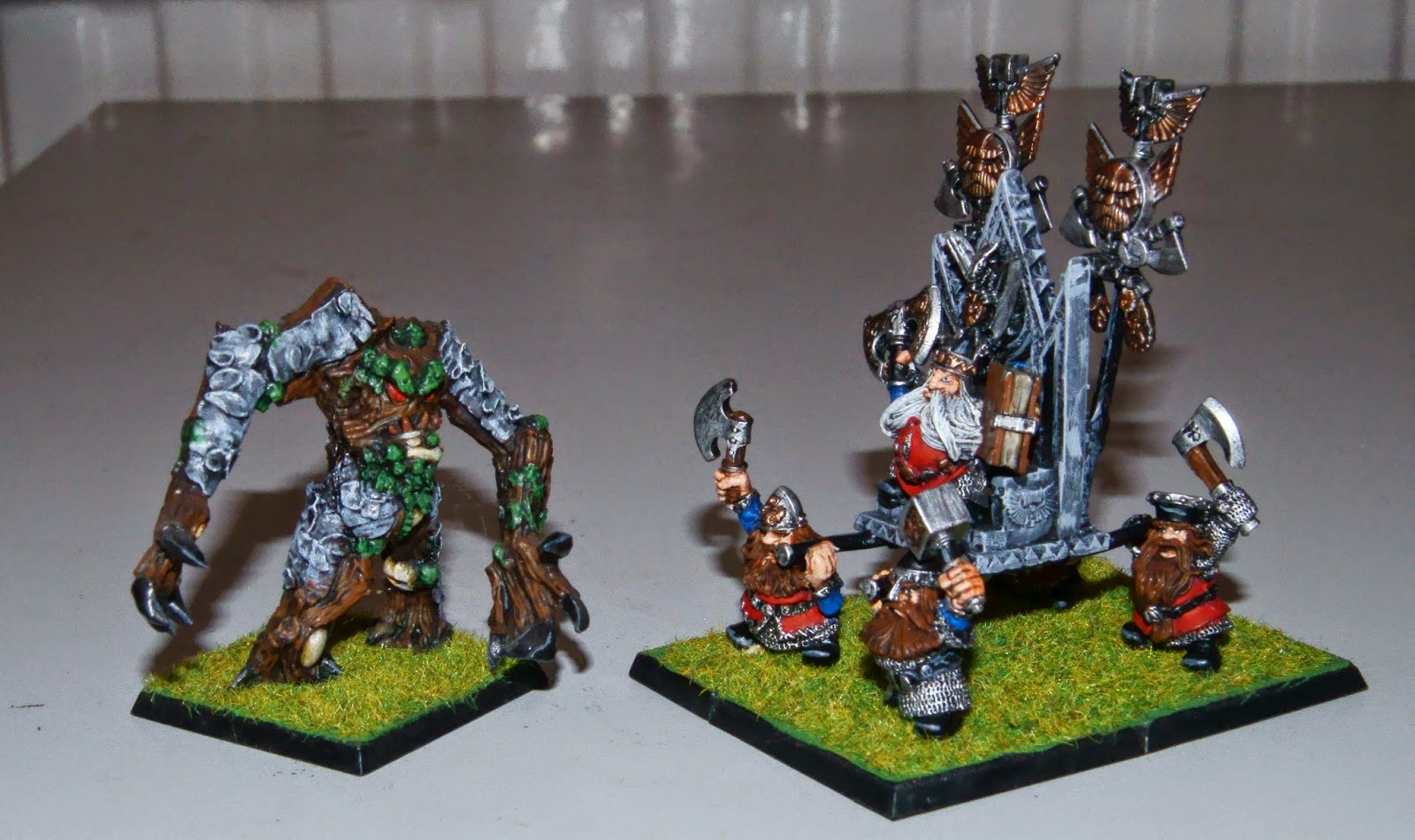 Two of my favourite minis fighting each other here, it took a couple of rounds due to the Treemans toughness, but the Dwarf High King wasn't going out in the first round, no way. 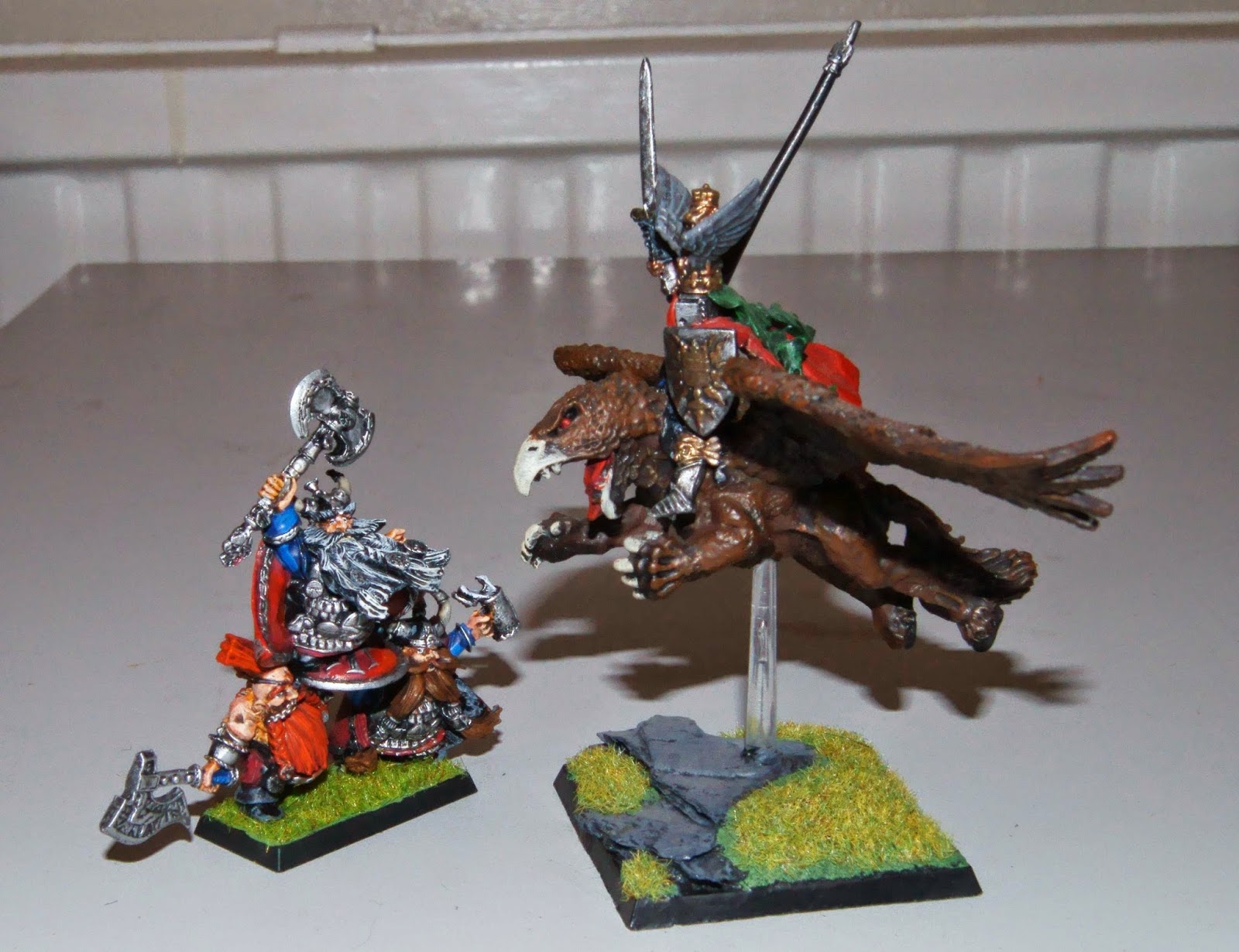 Although the King got lucky in the last round he was totally outclassed here, the three dwarfs made epically short work of him and his mount. 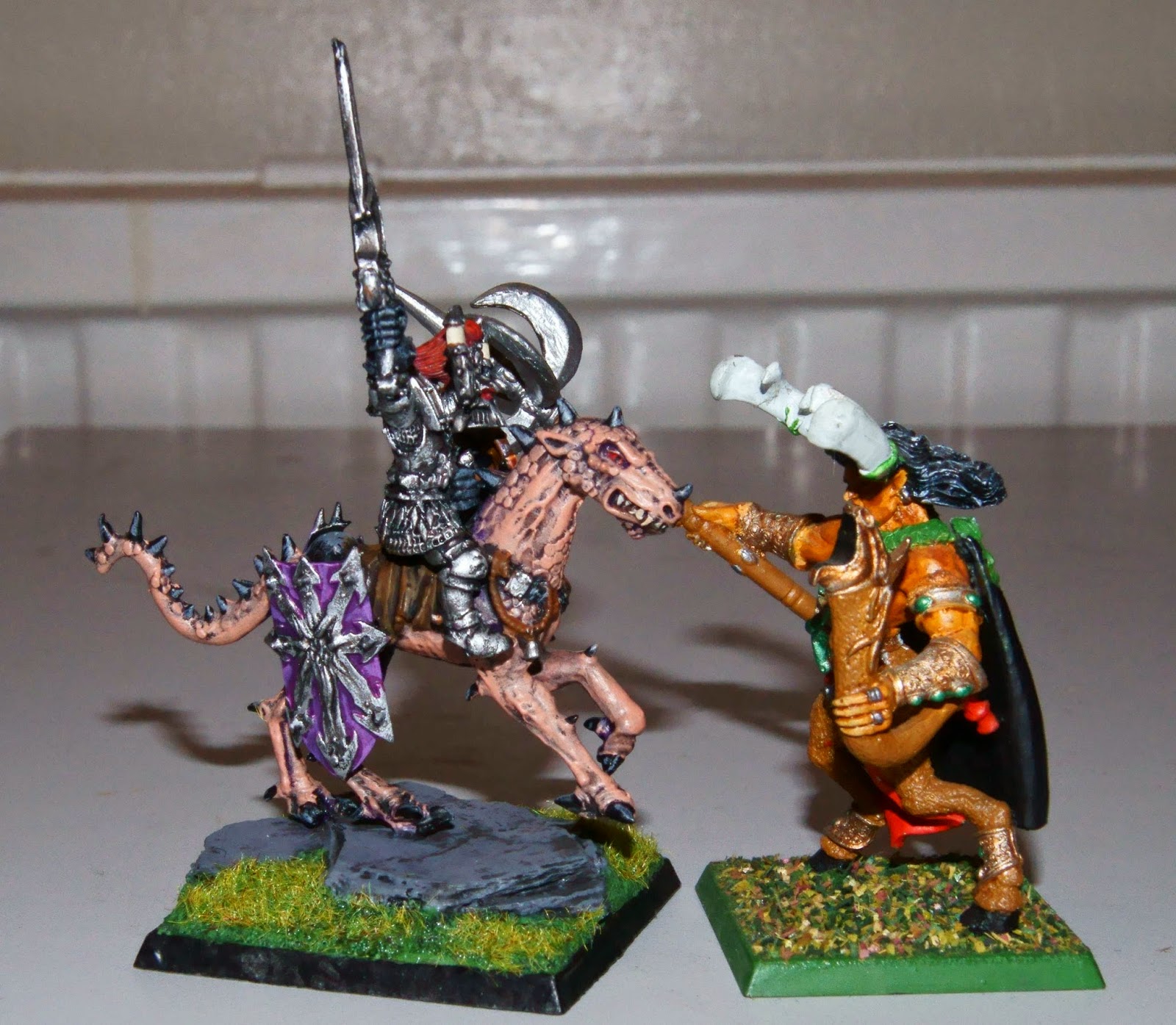 Another close one, we favoured Archaon before the fight, but Mikes dice rolling interfered again and the mighty Orion took the day and a surprise place in the semi's. 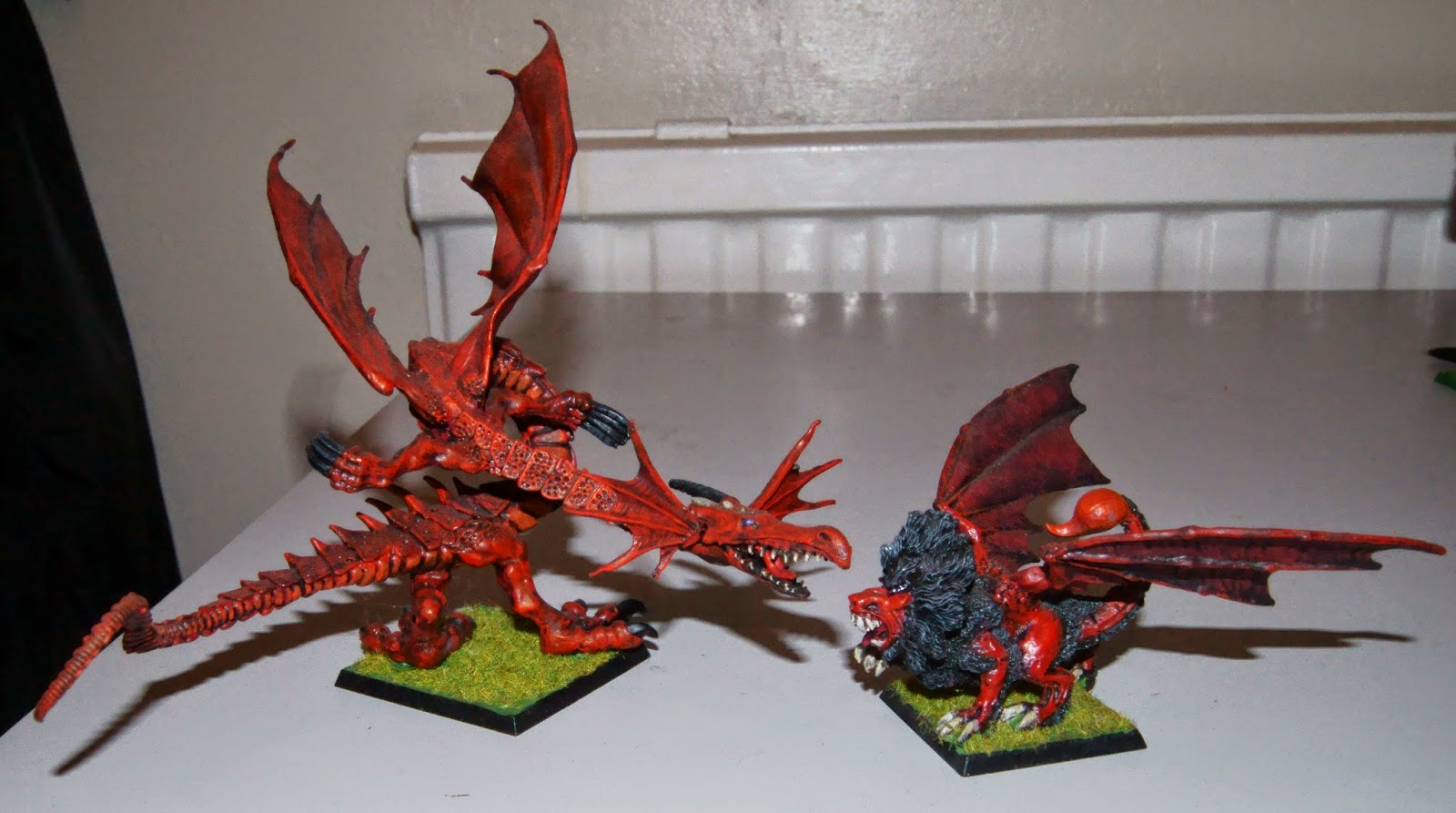 Ha, this didn't last long at all, the Emperor Dragon sails into the semi's 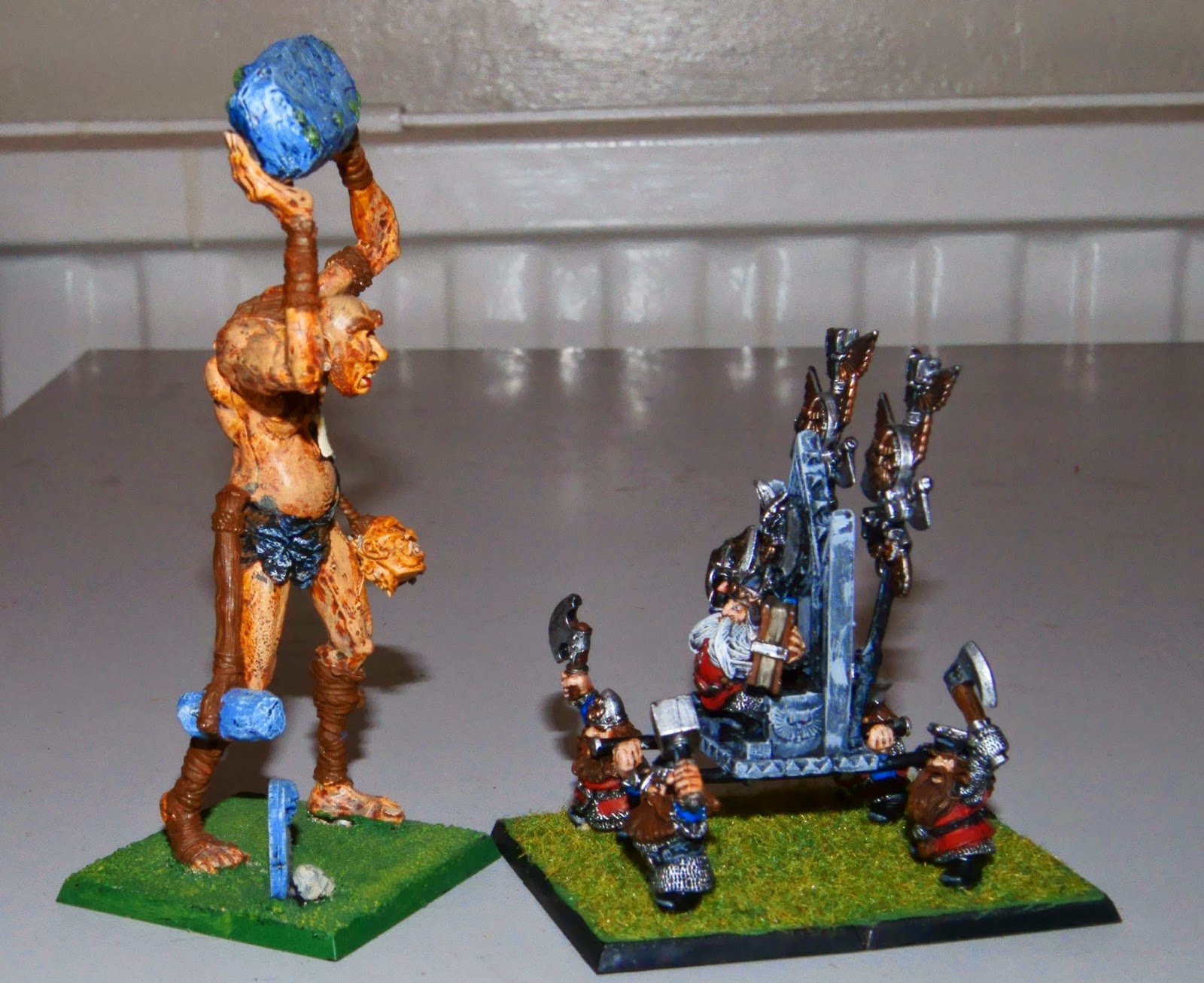 The end battle of round two and no surprises here either, the second Dwarf makes the semis. 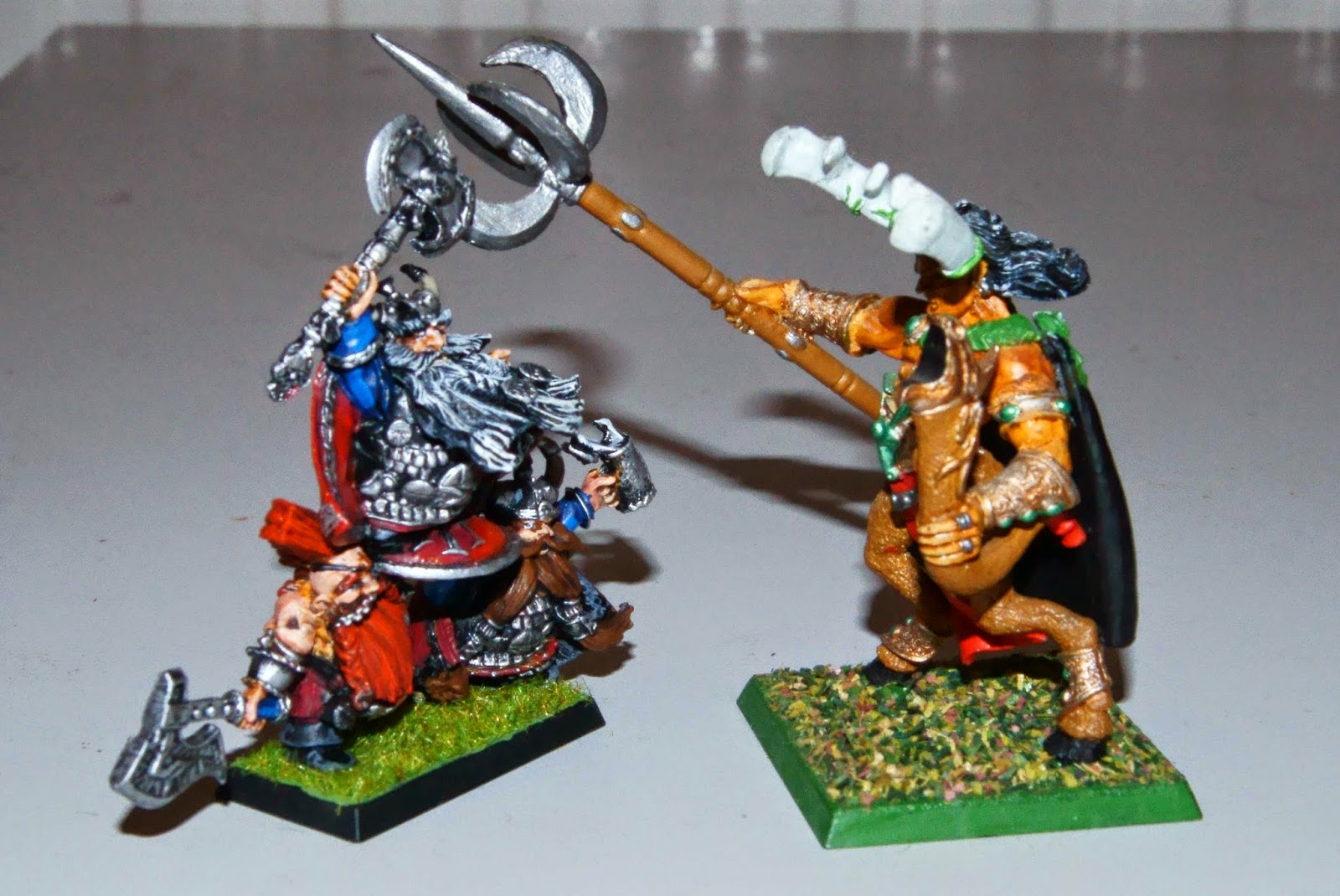 The first semi then, getting serious now.  Despite a good start from Orion he just wasn't tough enough to weather the torrent of attacks the three dwarfs put out and finally met his match. 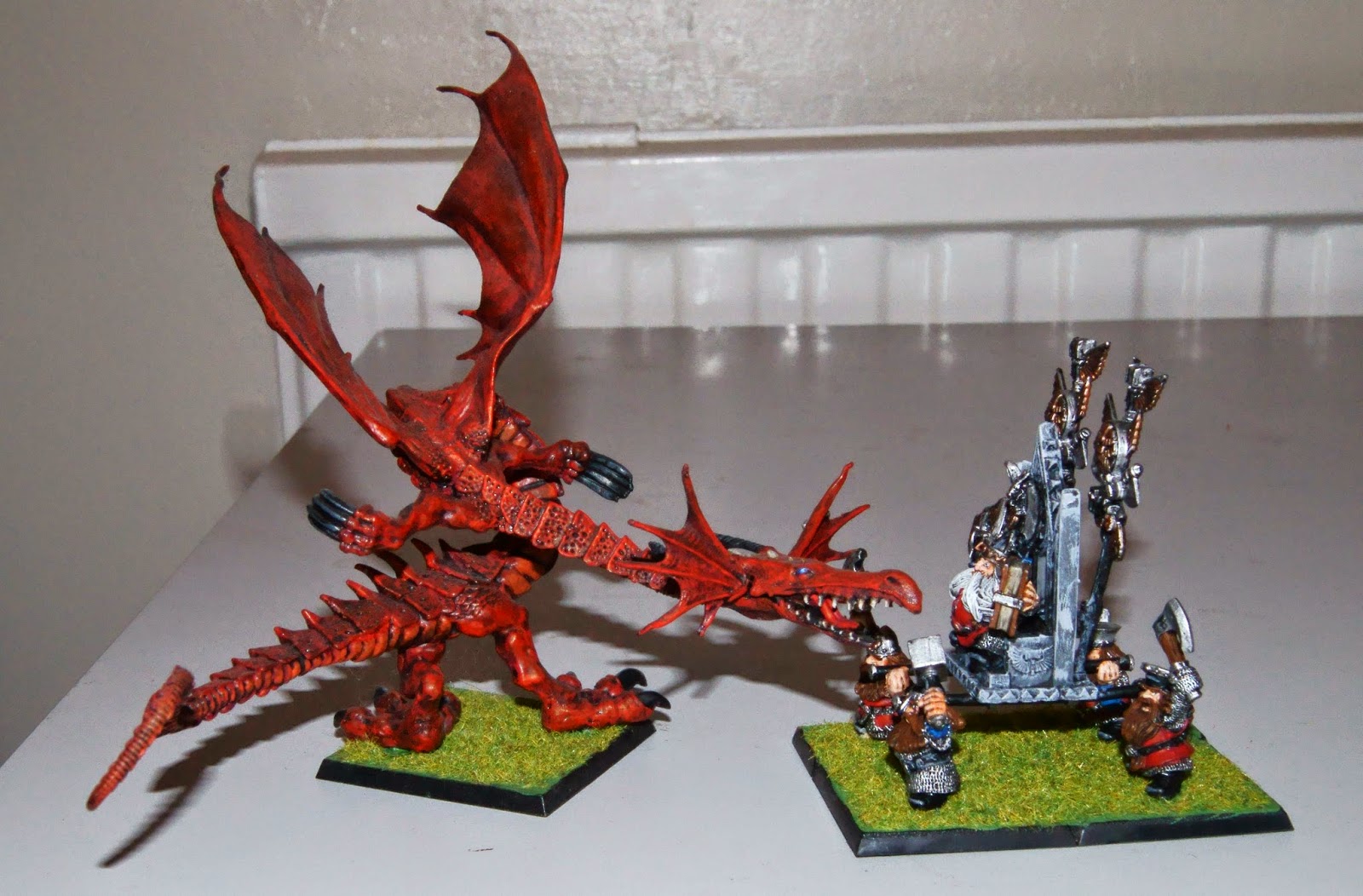 We really weren't sure which way this was going to go, sheer brutal stats or fancy magic items?  It was a close one, but Dwarvish awesomeness won through in the end. 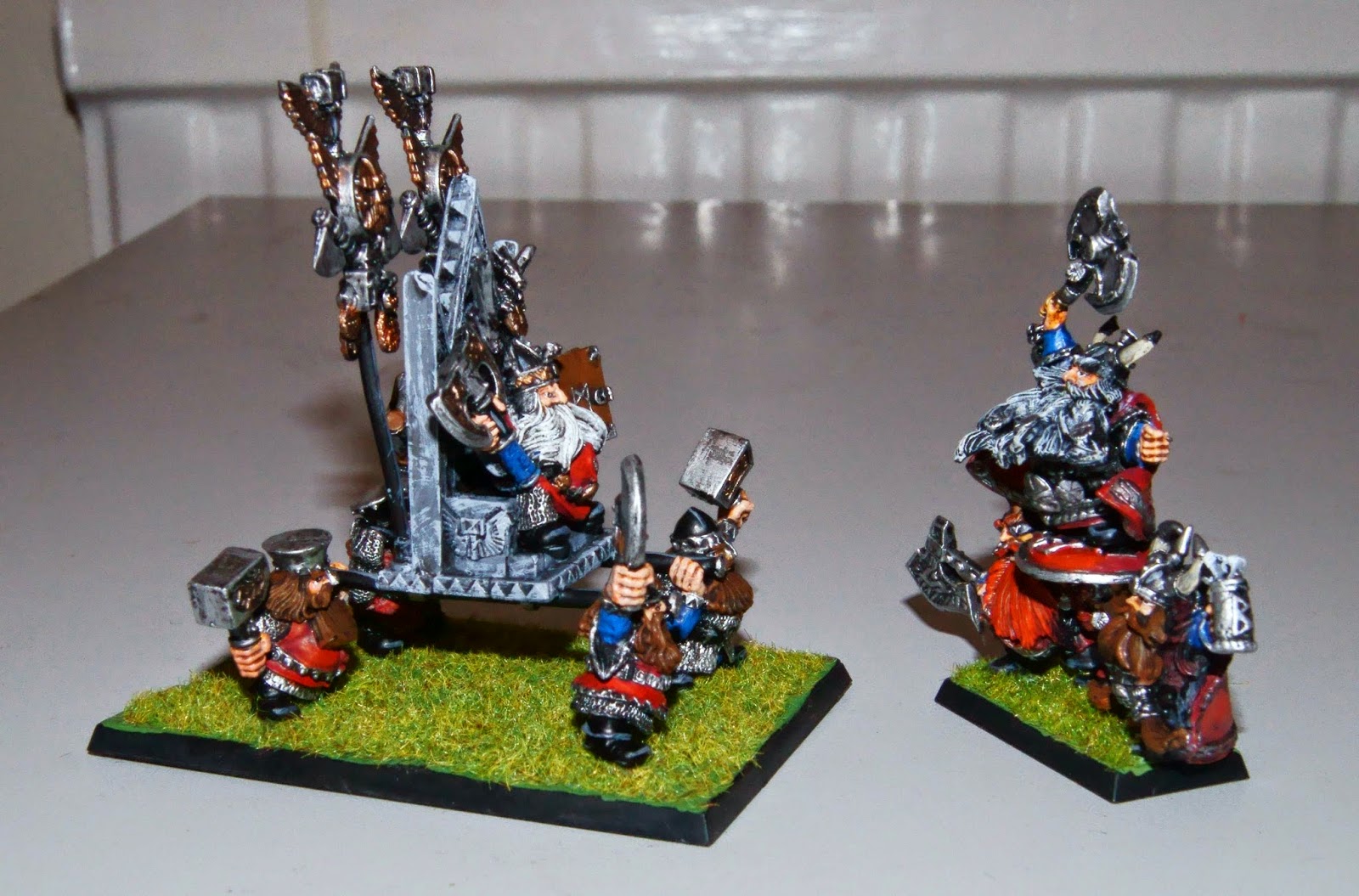 The final then, Dwarf vs Dwarf (see I knew Dwarfs were the best that's why I have so many of them), it took a few rounds but ultimately the White Dwarf and friends struck down the High King and claimed the throne for himself.

There we go incontrovertible proof that the White Dwarf is the hardest character in Warhammer fantasy.... Well at least when he brings two of his mates along....