My latest thoughts on this months gaming literature, these posts seemt to be quite popular so these mini ramblings are probaly going to become a regular feature. 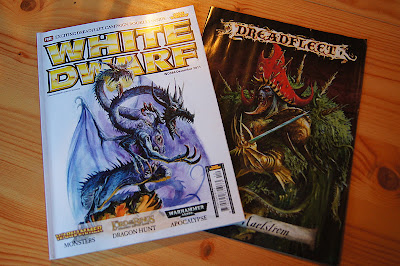 As usual I'll start with White Dwarf, it comes with an extra little dreadfleet booklet, which when I first saw it I was quite excited about, then I read it, and unfortunately its just a big advert (they must have a load left to shift), still at least it wasn't taking up space in the main mag.  The actual Mag is a good one again (this is almost starting to become a habit), it contains real rules for both warhammer (new scrolls of binding for the new fancy monster kits) and for 40K (apocalypse datasheets and 4 scenarios for a Necron vs black templars mini campiagn).  There are also a couple of painting articles, a couple of model showcases (I always like seeing other models in a unique style) and the obligatory battle report.  It's a good read and the best issue in a while. 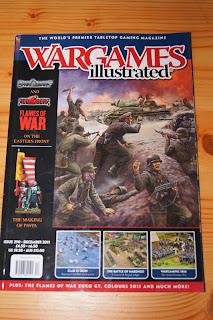 Now moving on to Wargames Illustrated, this months theme is eastern front WW2 in 1944, and is tied into the new flames of war releases, it's not the best theme, but doesn't dominate the mag, and there are some really good other articles in there.  For me the highlights were the article on the Comanche Indians and the article on the Austro-Prussian war of 1866.  The other interesting part was the start of a new series called 'tabletop musings' which seems to be in the model of white dwarfs 'standard bearer', this time features some thoughts on the use of cover in games, I like little articles like this and have high hopes for this series.  The mag also features a report on the colours 2011 show and articles on the battle of syracuse, the battle of pavia and some ACW ironclad action.
Posted by brownk29 at 13:32:00