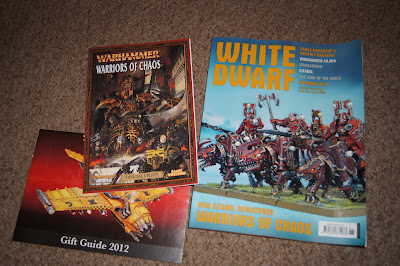 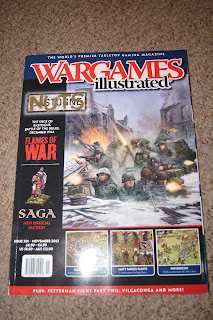 This months theme isn't much of one really, it's the battle of the bulge for flames of war and there are two articles, one scenario / battle report and one on making appropriate terrain.  Not particulary inspring stuff to me I'm afraid, but there's some good stuff elsewhere in the mag.  The standout article for me is 'savage wars of peace - part 1' the start of a series about adding some victorian stereotype heroes and antiheroes to colonial wargames and developing them, some real potential here.  Another article which will be useful to many is an army list for the Byzantine faction in Saga (a game I'm managing to resist playing for now) with the battle board for them printed on the back of the magazine.  Other articles that I liked included one on some fantastic dioramas of the peninsular war and a look at a battle between the incas and the spainish, which was a bit of a different era to get a look in.  Overall a perfectly good if not spectacular issuse.
Posted by brownk29 at 19:08:00