I've already managed to paint the first lot of my 1/3000 scale ships from navwar.  I decided to start with the random ones, before moving onto the ships for my WW2 British fleet.  I'm pleased with these and they paint up really well, for most of them it was a simple case of black undercoat, them paint grey all over, black wash, grey drybrush and the paint the decking and details.  I think that I'll easily make my goal of having them all done by the weekend and am already putting my second order together. 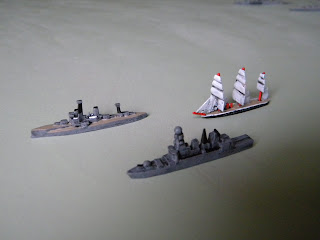 The first ships I painted, from left to right, HMS Dreadnought (1906), HMS Daring (2007) and HMS Warrior (1860).  The warrior was definately harder to paint than the others (both the sails and white trim), and I think the Dreadnought is the least detailed of the capital ships I have. 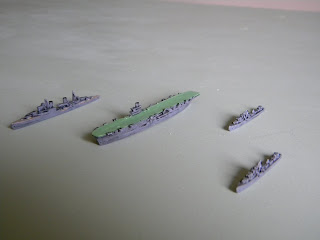 The first batch of the WW2 ships.  From left to right, HMS Sheffield (a town class light cruiser), HMS Ark Royal, and 2 J/K/N class destroyers.  The Ark Royal was the biggest painting challenge as I'm not keen on the block deck colour, I tried painting on the deck markings but it just looked silly so have repainted it uniformly, this might change again yet though. 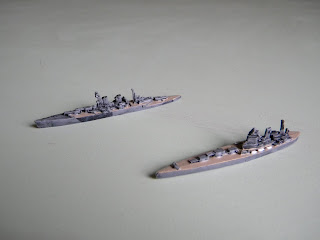 And finally a couple of the big boys, from left to right, HMS Repulse ( a renown class battlecruiser) and HMS Rodney ( a nelson class battleship).  These are the types of ship that have sent me down this course and I'm impressed with both.

I've not based any of them yet as I can't decide weather to paint the bases green (which would work with my pea-green table) or blue (just seems more sea like).
Posted by brownk29 at 21:07:00