Well march has turned out to be a month of contrast, as far as quailty of wargaming magazines goes.....


White Dwarf this month is really bad, with very little real content.  The first 33 pages (around 25% of the magazine) is just the new releases segment with a lot of pics of the new empire models and the new paint range, all of which is basically repeated throughout the rest of the mag.  The next major chunk of the mag introduces the new paint range and provides a lot of useful tips, although its in an odd landscape format that looks as if it's been ripped straight from the new 'how to paint book', still I might be wrong and as I'm not planning on getting the book the painting tips are still useful.  Then we get a very vague bit of empire background and the rules for Karl Franz (from the new army book), this is very disappointing, no design notes again, so I have no idea what changes have been made to the empire army, only what new models I can buy, I can't stress enough how much I miss getting real design notes.  Then the final part of the warhammer civil war supplement.  For 40k we get 3 battle missions for use on death worlds, this is good and useful and probaly the best bit this month.  Then a tiny little space wolves vs tyranids battle report and finally a bit of painting tips for space wolves, also in the new landscape format.  Then finally the next installment of the tale of four gamer for LOTR, but even this has been screwed up, only a couple of pages long.  Also no standard bearer and no hall of fame.  Such a lame issuse, I can't be bothered to go find out when there was last a worst issuse, but I recon it was a while ago.


You also get this free poster, which is rather dull and I'm not going to put up, still its free I suppose. 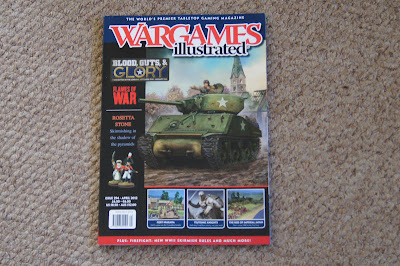 Thankfully I really like this months issuse of wargames illustrated.  This months theme is the new 'blood, guts & glory' book for flames of war, but it only gets a couple of articles (a guide to some gamers tank armies and a battle report) and doesn't much feel like a theme at all.  For napoleonic era fans there's a guide to skirmishing in1790's egypt and an article on the war of 1812. An interesting 'great warriors' article on the teutonic knights, to coincide with the release of fireforge games new plastic knights (this is how to promote new products and write a good article at the same time, please pay attention WD).  The other stand out articles for me were a guide to French Zouaves 1830-1860 and the first in a 3 part series on the rise of Imperial Japan and the fall of the Samurai.  There is also a fascinating 'hobby talk' article on using the space hulk ruleset to represent WWI trench raiding, something I can't wait to try out, just need to get me a trench system to go with my WWI figures.  The final thing of note was the start of a painting and modelling series by matt parkes which shows a lot of potential.  A lot of good quailty stuff here that coincides with my periods of interest.  Certainly a win in my book.
Posted by brownk29 at 21:38:00