A Late post today and a quick look ate GW plastic dwarfs thorugh the ages.  The pics below show the 5 generations of plastic dwarfs in my collection and one of the mantic dwarfs I got the other week from dwarf kings hold. 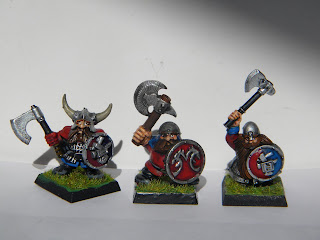 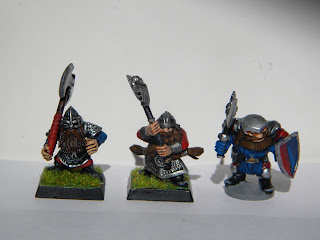 Ok, so left of the top picture we have the third edition single pose (although with 2 head options) dwarf.  He's not too bad considering his age, the biggest problem with him is that you have to put them in the diagonal slot to be able to rank up into a regiment.  Top pic middle is the next single pose dwarf from the 4th ed, in my opinion the worst of the lot, hes too fat, his beards to short and his hand's are too big.  They still in my army only because I already have them (they where vital to keep costs down back then) but now never get used.  The last model in the top pic is the single pose dwarf warrior from battle of skull pass at the beginning of 7th ed.  I quite like these guys and approve of the fact that when GW do single part models now adays they at least mix poses up on the sprue, which generates a much better looking regiment.

The second pic has on the left the original multi-part dwarf and my favorite out of the 6 models.  I like the options and the heads, and the fact that the seperate arms allow for easy conversions, my only issuse is the slightly oversized hands (which was a weird trend back then).  The middle model is the current multipart kit, they're not bad but the reason i prefer the previous version is that the way the hands take the weapons and the arms are moulded into the body mean that they're just not flexible enough, still maybe I'm just being picky.

And finally in the bottom left we have a mantic dwarf warrior, I do like these, but they don't really mtch with the GW ones, they're a lot bigger for a start, both in height and body.  I certainly wouldn't be happy mixing them in a regiment, if you wanted to use both you'd have to keep them in sperate units, but even then i'm not sure.

Also today a quick look at some of my dwarf themed terrain. 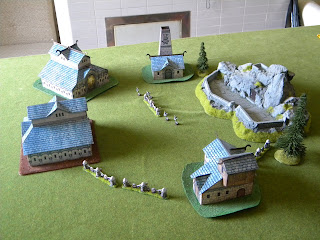 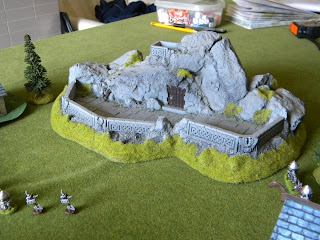 Nothing really out of the ordinary, some of the plastic 'Kings Wall' from battle of skull pass, the cardboard brewery buildings from the old grudge of drong camapaign pack and a rather cool fortified hold entrance made out of a sort of hard foam that I actually got given for free from my local GW (apparently they weren't allowed to use it any more as they had a new rule telling them to only use terrain they sold, which kinda makes sense if a bit OTT).  Its not loads, but its enough to give a dwarven feel to a battle.
Posted by brownk29 at 22:48:00