So today we're going to look at the miners (and related pieces) from my collection going through in the order they were aquired.   In the current book I think the miners fulfil a vital part of larger dwarf armies, the abilty to launch a suprise flank/rear attack when your army normally only moves 6 inches can really crimp an opponents day, they just add a lot of flexibiltiy to the force that I really like.  the anvil of doom makes them much better as then  you can bring them on and charge in the same turn... oh yeah and they all look cool with their giant picks.
﻿ 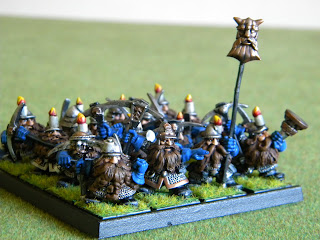 First up the oldest and only metal models on show today, a regiment of the original miners led by the hero Krudd Mad Mattock (from the grudge of drong campaign pack).  These where released in about the second white dwarf I ever got (about 1992 I think) they're that old, only 16 of them (back then a rank only needed to be 4 wide) still my favorite out of my 3 miner units. 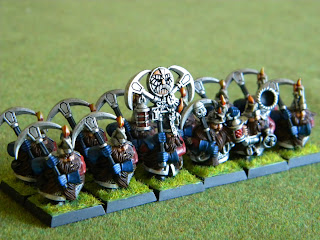 Here we have the plastic miners from the battle of skull pass, these guys are ok if not spectactualar models.  On a side note if you were actually playing the battle of skull pass (much more balanced that the island of blood) the small unit of 8 of the guys you got were really good, its amazing the power of a double handed weapon. 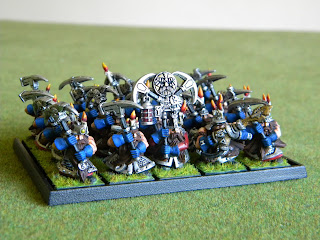 My last miner unit aquired not long after the previous one, the current plastic kit.  It's a good kit with loads of extras, but i do feel that sprue space maybe could have contained more dwarfs, like the other current dwarf plastic though I do find the design quite limiting in what you can do with them.  The unit includes a spare standard bearer from the battle of skull pass as I wanted to use a miner for a little vignette.... 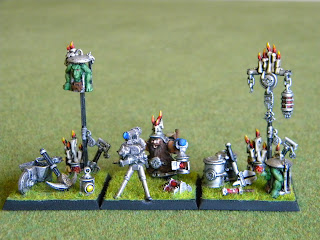 You really do get a lot of spare parts, barrels, wheelbarrows, steam drills, caged gobbos, anyway I made these little vignettes/objective markers, I think they're kinda cool, although looking back I probaly shoudn't grassed them, especially the one with the drill a hole in the wall, oh well... 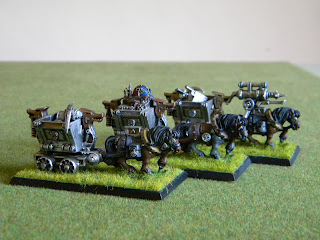 And finally you also get one of these cool mine pony's with every 10 of the new miners and one in skull pass (the one in the middle), again I'd rather of had more dwarfs, but a wagon train is a useful thing to have too.
Posted by brownk29 at 21:40:00