As I'm still waiting for dwarf kings hold to turn up (grrrrrr) I've started to watch Grey Knights week on beasts of war (my favorite site on the net for all things wargaming, seriously check them out), and I'm gonna take the opportunity to share two of my favorite models from my collection. 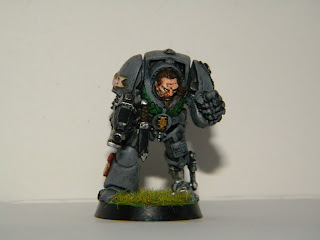 This is an old Inquisitor model from the back end of the Rogue Trader era of 40K, in what passed as terminator armour at that time.  I just love the guys face and the way he points his powerfist at you. 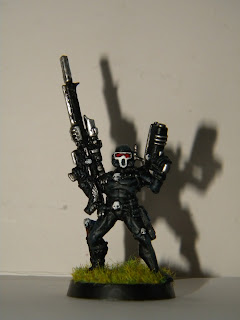 Another favorite of mine, the first Vindicare assassin model from when the assassin temples were introduced in 2nd ed.  Of all the assassin models that GW have ever released this is the one that screams silent killer to me and epitomises how I saw the imperial assassin.

Hopefully at some point in the next few days I'll be posting my review of dwarf kings hold.
Posted by brownk29 at 19:19:00

Email ThisBlogThis!Share to TwitterShare to FacebookShare to Pinterest
Labels: 40K