The fifith day in my Dwarf Week and today a quick introduction to some of my models form the engineers guild, this is a very brief look as I have a lot of artillery in my collection.  Way back in 4th ed I used to feild a LOT of artillery typically taking my entire 25% allowed and almost always 4 organ guns (they were 65pts back then), nowadays I play a lot more agressivly and whilst obviously still feild some artillery, now at 2000 I would normally only feild a couple of pieces plus a gyrocopter.  The new edition has made artillery better, but its also made dwarf infantry a lot better, and I'd rather kill things with axes than guns at the moment.
﻿ 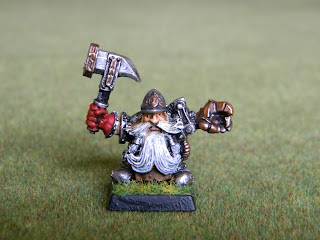 To start off an old 4th ed. special character the guildmaster of the engineers guild burlock daminson, complete with robotic steam powered arm, its shame hes been got a rid of, I thought he was a bit different to the other very bland kings/runelord characters we often get for the dwarves. 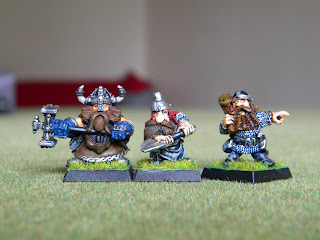 Here is a selection of engineer models, the one on the left from 6th ed when engineers became heroes, the other two are a lot older. 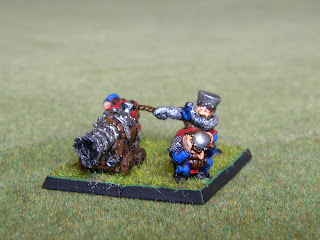 This is my favorite artillery piece in my collection, the origanal flame canon.  I used to play someone who got very upset when it killed his high elves because he said it was too tiny and too stupid looking to cause that much damage.  What I love about it is the crew, the way they look as if they know its going to explode at some point. 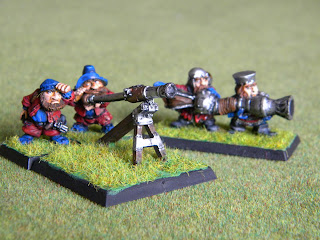 Here we have two dwarf war machines that no longer feature in the game at all, on the left is a swivel gun, a form of light canon.  Then on the left we have an old dwarf flame thrower, a real shame that they decided to limit them to skaven only. 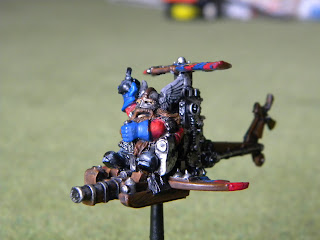 Now we get to the most important war machine the dwarfs can feild, the frankly awesome gyrocopoter.  Why is it awesome, (not its stats certainly), its because in an army when everyone can only march 6', this boyo can fly 20' and thats an important ability to have.  These have won so many games for me causing havoc behind enemy lines, blocking marches and making suicidal charges to send people off in the wrong direction, I absolutly love these guys.  Never leave home without one. 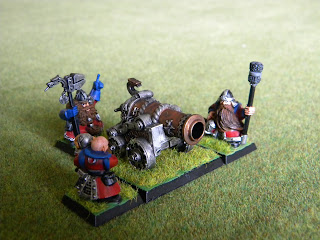 Here we have the humble canon, the battle of skull pass version.  The models ok, but not brilliant and the crew are a little two dimensional, but you can get these very cheap off ebay.  The dwarf canon has got a lot better in the new edition as it now cuases D6 wounds indstead of D3, which has changed my opinion of them completely and with the new trend of feilding big monsters in warhammer a gun that can potentially kill most of them in one shot is pretty niffty. 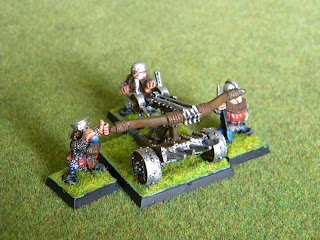 And finally the even more humble bolt thrower, these guys are very cheap and whilst they don't reliably hit, when they do hit the right target (say bretonnian knights in lance formation) they can do a lot of damage for the measly 45pts they cost.
Posted by brownk29 at 19:40:00