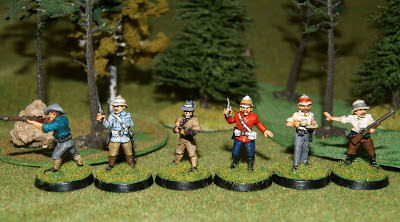 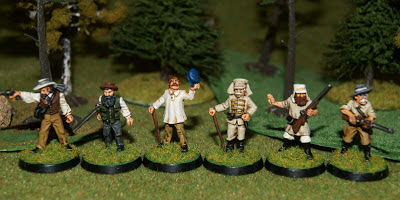 And what are these for? Well the idea is to go hunting, but hunting for dinosaurs and other prehistoric beasties!  In the deepest African jungle in the year 1890, some mysterious creatures have been spotted and the race is on to bring back specimens to the great Museums in London and around Europe.  Not entirely sure on rules yet, will be homebrew of some sort, and we plan to have a bit of fun with this.
Posted by brownk29 at 21:31:00 3 comments:


I've not been getting much painting done recently, work commitments, holidays and nice weather have all taken precedence!  However I've not completely forsaken this blog, and today we have a look at my warbands for Mordheim.

Despite GW's policy of getting rid of specialist games as a distraction that doesn't generate enough profit, these warbands and the game of mordheim are directly responsible for my return to wargaming and the significant expansion of my collection.  I gave up wargaming as I went to university and for several years played no more than a bit of Bloodbowl.  Towards the end of my 7 years away me and some friends had a hankering for a few games and mordheim allowed us to play with limited space and the few models we had lying about.  When I returned home it was mordheim that we played and also brought my friends from home back into the wargaming fold.  Specialist games work and it's a real shame to see them go.  Anyway without any further waffling or ranting here are my warbands:

The first of my warbands was these Averlanders.  Based on the empire mercanry sprue mostly with the addition of a few halflings, a faithful hound and an elven hired sword.  A (very) shooty warband, and large as well.

These Bretonnians were nowhere near as successful, being severally limited by a low max warband limit and low stats.  However, the 4 classic citadel foot knights are among my favourite models.

Dark elf corsairs, mostly made from a single plastic boxed set, with the addition of a very old metal witch elf and 2 old dark eldar warp beasts to count as cold one beats.﻿

Some more classic models here in this Norse warband.  The berserkers and the jarl are also among my favorites.  The ability to find uses for cool models without needing an army is of course one of the delights of skirmish games like mordheim.

Some actual mordheim models in this possessed warband, but also some added plastic beastmen (the rest of the box made up a beastman warband) and an old pink horror I had in a box for the warbands second possessed.

Skaven warbands tend to become rather sprawling and mine is no exception.  Fun to play, although often frustrating when it comes to the break test.

One of the last warbands I made, for an intended lustria campaign that never happened.  Saurus are great and even skinks have their uses.  Rolling lads got talent on a saurus will always give you a smile.  I've used the old 5th ed boxed set single pose models for the henchmen and metals and newer multipart plastics for the heroes.

I've always loved the imagery, background and models of the witch hunters, but have also struggled to make them work.  Much like the Bretonnians they suffer from low numbers and average stats.

And finally a ridiculously shooty wood elf warband (played using the high elf shadow warriors rules).  Mostly built from one plastic wood elf boxed set with the addition of a metal shadow warrior as the leader and a mordheim elf wizard.

We're not playing mordheim at the moment, so no more work on any of these is imminent.  I do have unpainted beastmen and undead warbands too that I might get around to one day, but then again I might not.
Posted by brownk29 at 22:15:00 3 comments: