With season 3 of Dreadball due to drop through the mailbox any day now I decided it was about time I got a move on and did some more work on some of the season 2 teams.  What we have here is the robot team which I'm looking forward to playing.  The team starts the game as 6 jacks, but can transform into strikers and guards as the game goes on, it's an interesting sounding mechanic.  I've painted the team in a basic bronze scheme that was quick and easy to do and I think gives a nice almost 'steampunky' feel. 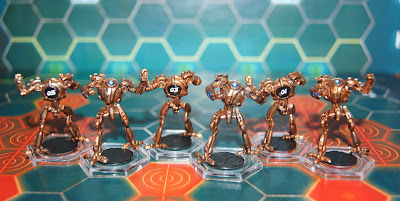 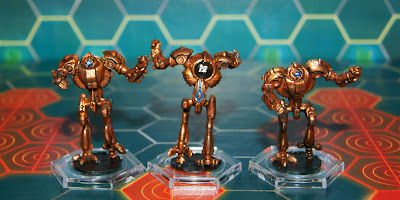 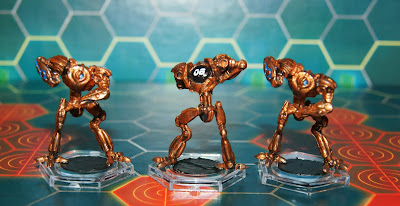 Below we have two of the MVP's from season 2, on the left is 'Gabe' who is from penny arcade and the robot 'Firewall'. 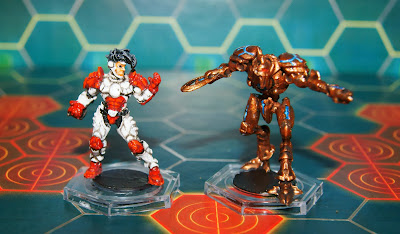 And finally 4 coaches.  This is a great pack with 4 really characterful models, 'Orcy' is my favourite.  Unfortunately the coat of varnish that I apply to all my Dreadball minis to help them survive the rigours of play has spoilt the paint job's slightly. 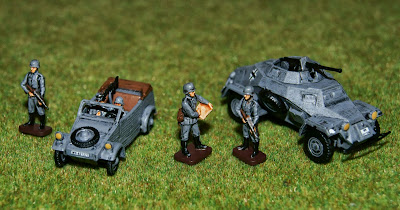 I was off work sick last week and wanted a quick little project to keep myself busy, I came back from the model shop with this WW2 1:76 scale German Reconnaissance set from Airfix.  The set contains 3 infantry figures, two of which are unfortunately the same and two vehicles.  The vehicles are a Kubelwagen car and the highlight of the set which is a SD.KFZ.222 armoured car.  It's a good little set and I enjoyed assembling and painting it. 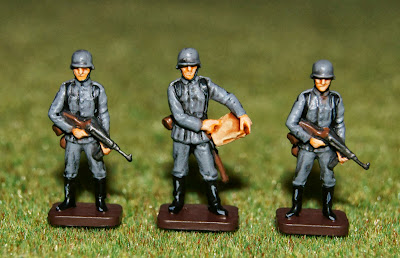 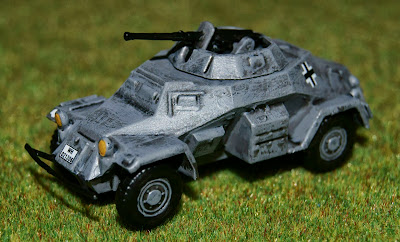 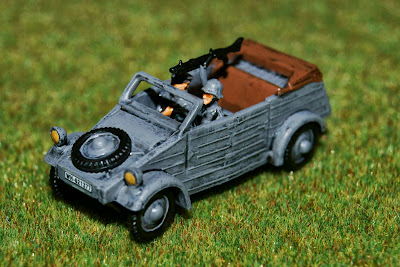 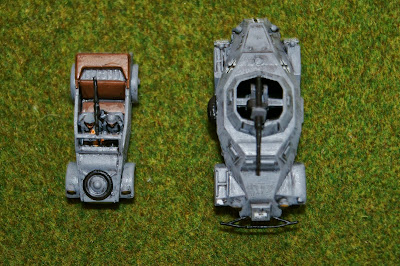 
A couple of new additions to my space marine army today, a Land Raider and an attendant techmarine.  My copy of the new Codex: Space Marines arrived yesterday as well, obviously I've not managed to read it all yet, but it looks really good, possibly the best codex yet produced, in terms of the production values, art, background and what seems to be an interesting, yet still balanced, army list.  It wasn't cheap, but I'm really impressed.  Hopefully I'll post some more detailed thoughts in a couple of days. 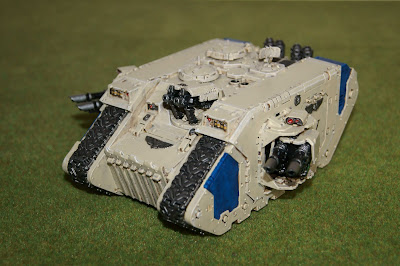 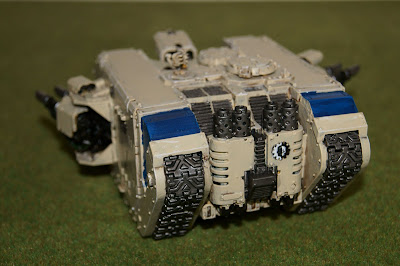 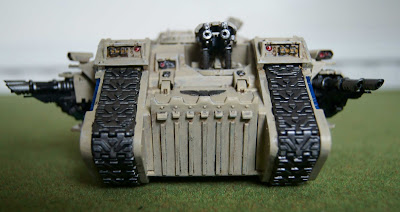 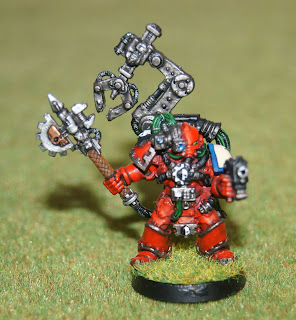 There's been quite a few competitions going on recently around the blogosphere, and after having entered a lot of them I've finally won one.  I'm now the proud owner of 'The British airship at war, 1914-1918'.  I've only had a quick flick through so far but it looks really interesting.

I've been interested in airships as long as I can remember, which is probably due to having lived in the shadow of the old Royal Airships Works, near Cardington, Bedford, for most of my life.  These two 'sheds' are absolutely huge and dominate the countryside for miles around.  The famous R101 airship was built there.

Anyway thanks to Edwin at Thoughts of a Depressive Diplomatist and a recommendation that you check put his blog too. 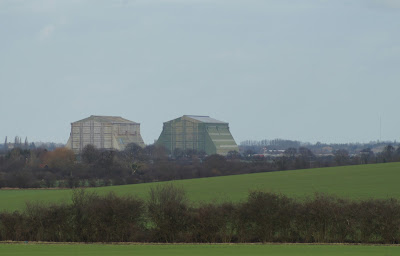 The hangars at Cardington as seen from my village
Posted by brownk29 at 10:55:00 2 comments:

From the Painting Table 8


I'm resurrecting this old format of mine to show off a couple of completely unrelated projects that I've just finished.

To start with we have this squad of 6 Eldar dire avengers.  Painted in a similar manner to the last unit of these I painted, but with the red and white crest pattern reversed so I can tell the members of the two squads apart. 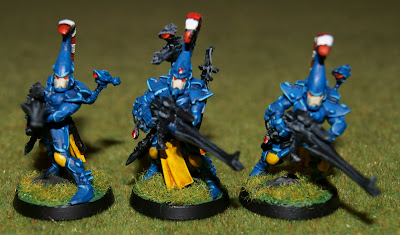 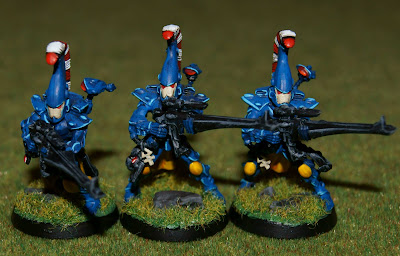 We also have this 1:288 scale model of the Lockheed SR-71 Blackbird, made by somebody called Ace Corporation who I've never heard of.  This purchase was of course inspired by my recent trip to the Imperial War Museum at Duxford.  It's not a big kit, but it does what it's supposed to do just fine.  It has the option of wheels, but I've mounted it on a GW flying base.  One think that struck me about this kit was that it came with 29 separate, often very small and fiddly, transfers to apply! 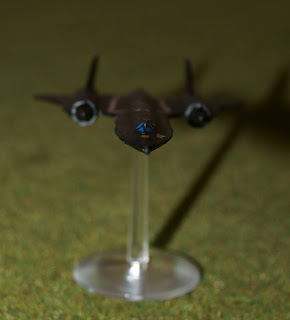 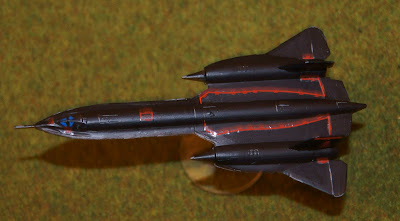 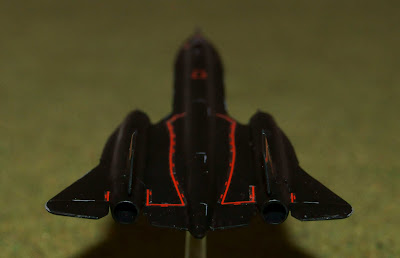 Email ThisBlogThis!Share to TwitterShare to FacebookShare to Pinterest
Labels: 40K, eldar, from the painting table, modern


Some more additions to my alpha Legion force today, the bulk of which is this 15 strong squad of Khorne Berserkers shown below.  This is an amalgamation of two lots I bought off ebay a while back (both lots also included other bits as well), the problem with this is they're not necessarily assembled as I would have chosen.  The question of course is why do I have Alpha Legion Berserkers in the first place? Essentially because I want to, and I don't think it's beyond reason that over the millennia some of an isolated alpha legion warband wouldn't fall to worshipping one god or another in particular.

I've also made and painted these three alpha legionnaires below to bring my second marine squad upto 10 men.  These are made up from a variety of bits, the legs come from Khorne Berserkers that were in too bad a state to add to the squad above, the torsos and most of the arms are from loyalist space marines and the head and weapons are spares from the chaos space marine squad box.  I think it all worked out fine in the end though. 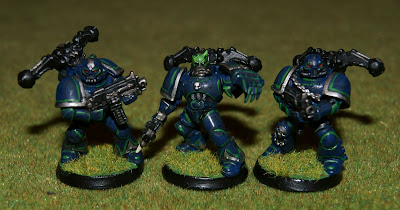 And finally a pic of my Chaos army as it stands now.  I have 5 more terminators and a small squad of plague marines too paint and then I need a centrepiece which I think will be a deamon engine of some sort, but do I go for a Heldrake, a forge fiend or a defiler?


Over the bank holiday weekend I took a long overdue trip to the Imperial War Museum at RAF Duxford, despite it only being 40mins away from where I live it's been over 15 years since my last visit.  Obviously I had some recollection of my last visit, but it was hazy at best, quite a bit seems to have changed as well.  The site is an old RAF station and is a collection of hangers, purpose made museums and old military buildings, focusing mainly on military aviation, but also featuring some civil aviation, naval and a large collection of land warfare exhibits.  You can just about get round it all in a day (we did), but I heartily recommend that if you're visiting you arrive at opening time! 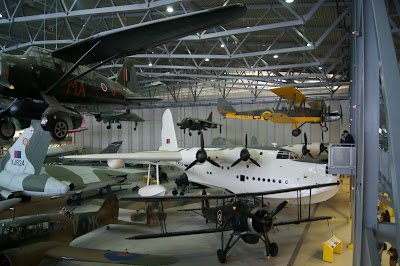 There are three main museums Airspace, The American Air Museum and the land warfare hall.  Airspace is the central gallery of the site really, it is a large hanger filled with (mostly British) planes.  Highlights include a Lancaster bomber, a Sunderland flying boat, an Avro Vulcan and a Concord (that you can go on and have a look around) plus lots more.  The hall also includes an introduction to flight and aircraft, which is mainly aimed at kids, but still had some fun buttons to press.  And finally it also includes the museum of parachute regiment. 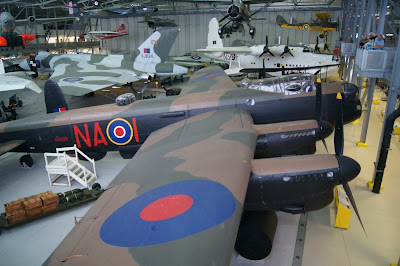 Oddly perhaps for a visit to an aviation museum my favourite part was the land warfare hall that is at the far end of the site.  It has a mixture of tanks, trucks and guns from WWI up to fairly modern stuff (although WW2 takes the lions share) all laid out in mock battle zones.  It's very good and there is a lot of stuff in there including the vans used by Montgomery himself as his HQ.  We also have another regimental museum here this time for the Anglian regiment.  Just out the back of the land hall is a tank arena, luckily we got there just as they started driving a bunch of tanks and other tracked vehicles around through the mud.  This was totally unexpected and was a great bonus to the day out. 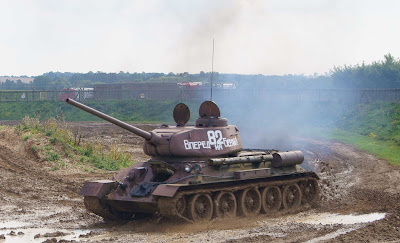 The American air museum is the last of the big exhibit spaces, a showcase of American military aircraft from early bi-planes up to modern planes.  The building is built around a B52 Stratofortress, which whilst being an awesome plane, is not the highlight of this gallery, which is undoubtedly the Lockheed SR-71 Blackbird.  The blackbird shouldn't really need any introduction, but just in case it does, it's an old US spy plane that still holds the record for fastest and highest flight by a manned aircraft!  On top of it's fantastic spec is the simple fact that I think it's the best looking plane I've ever seen.  Apart from the Blackbird and the Stratofortress my other two favourites were both hanging from the ceiling, the A-10 Thunderbolt tank hunter, and the U2 spy plane. 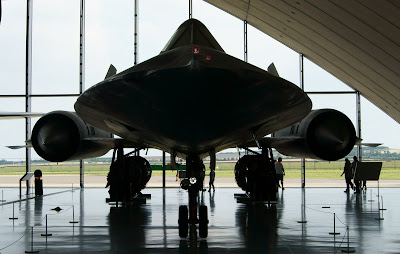 There are a number of additional galleries as well housed in old aircraft hangers.  The first one we went into housed a bunch of privately owned classic flying aircraft, both military and civil and some that weren't in a very good state at all, but are in the process of being renovated.  The next one was called 'battle of Britain' and as well as looking at the battle of Britain also looked at British air defences in general.  The most interesting of these hangers though was the 'air and sea' hall.  As well as more aircraft this also had a midget submarine,  an old lifeboat and torpedo boats from both WWI and WWII. 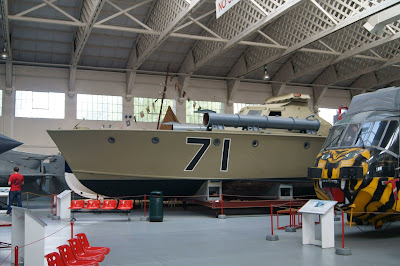 The site itself really adds to the day with the period buildings, and also lots of exhibits scattered around the place, including a large anti-ship gun that used to defend Gibraltar and a replica V1 rocket launcher.  Also (and I don't know if this happens every day) there were lots of planes taking off and flying about all day, including several bi-planes, a spitfire and a catalina.  A adult entry cost £17.50 which was definitely worth it.