Additions For My Kings Of War Forces of Nature Army


The first part of my Kings of War Kickstarter package should be in the post as I type this and although it will be a few months yet before I get the second package with the Forces of nature stuff in it, I've been having a bit of a look to see if I can do any work on my army in preparation, it turns out that I can.

The Green Lady has now found her way into the Forces of Nature list as well as the Elf list, so I went out and ordered her, she didn't take long to paint and is now ready to lead her forces. 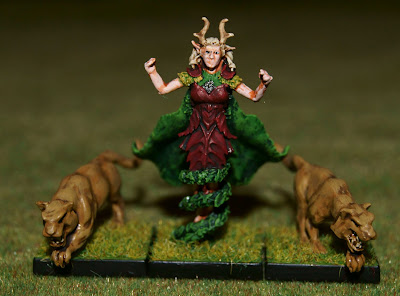 A while ago in one of the Christmas boxes Mantic do I got a single Loka earth elemental, which I'd painted up and quite liked.  I then managed to pick up a set of the green Loka pieces on ebay, but never quite got around to doing anything with them.  Over the last few days several of them have been sacrificed, painted and based for use in Kings of War.  Sawing the bases off was easy enough using a junior hacksaw and the paintjobs were very quick and easy.

These earth elementals are the main attraction providing the first regiment for the army (regiments are essential as they open up list building options).  I like these figures, the single pose is a bit of a shame, but still they work well I think. 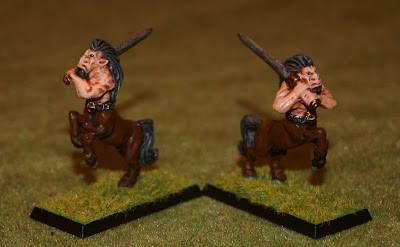 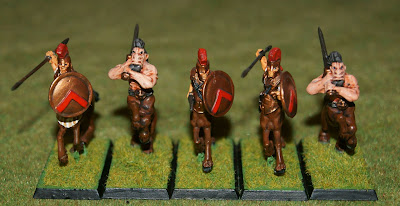 Next we have the two centaurs, and whilst no good on their own, I just happen to have three centaurs in my Greek collection which put together create a 'troop' of centaurs, even if the two styles don't quite match. 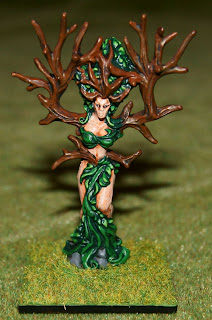 Finally I've used one of the Loka Queens as a Forest Warden.  I am a bit confused around what the Forest Warden was supposed to be, the Tree Herder is clearly your traditional Treeman/Ent and is a Hero[Monster] whereas the Forest Warden is only a Hero[Large Infantry] and a mere 75pts compared to 260 for the Tree Herder.  The Forest Wardens are also described as massive and ancient.  As there's no official model and the only thing that really matters in Kings of War is base size I'm going with this mini.