Hot on the heals of my wave 2 Deadzone package Mantic have also just sent me the first part of my (relatively small) Mars Attacks package, which basically amounts to the retail boxed game and the expansion book, with the rest to follow in a few weeks.

It was with some trepidation that I opened up the box as these are the first soft plastic PVC minis that I've got from Mantic, and I wasn't quite sure what to expect.  This is the material that they're using for all their board-game type releases from now, and I am expecting delivery at some point in the future a load more of these type of minis from the Dreadball Xtreme and Dungeon Saga kickstarters, so I had quite a hobby investment riding on them turning out OK. 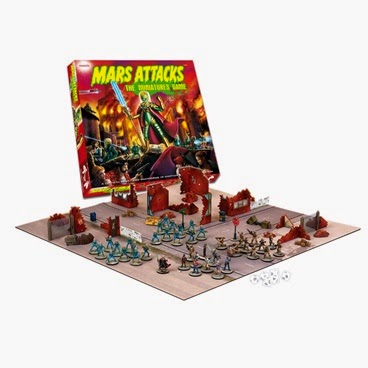 The first thing is that they all come pre-assembled, which felt a bit odd, and part of me missed having to glue them all together.  Having said that I think Mantic have made a wise choice as this makes it far easier for a novice to get into, and I think the whole Mars Attack set is a perfect entry point into miniature gaming.  The minis come in three colours, red for the heroes, tan for the US army and green for the Martians, again a good idea as not everyone will paint their minis and this looks better than them all being grey.  Another advantage of the PVC plastic is that they will take being knocked over or dropped very well and it will take a lot to break them, although we'll see if Mike manages to prove me wrong on that front.

The first thing to note is that a lot of the minis suffer from what I call 'floppy weapon syndrome' as can be seen in the top photo above.  However I can also report that this is easily fixed by dipping the minis in a cup of hot water.  I dipped the minis in the hot water and then left them overnight (to check that they would stay in their new positions) and the results are in the bottom picture above. 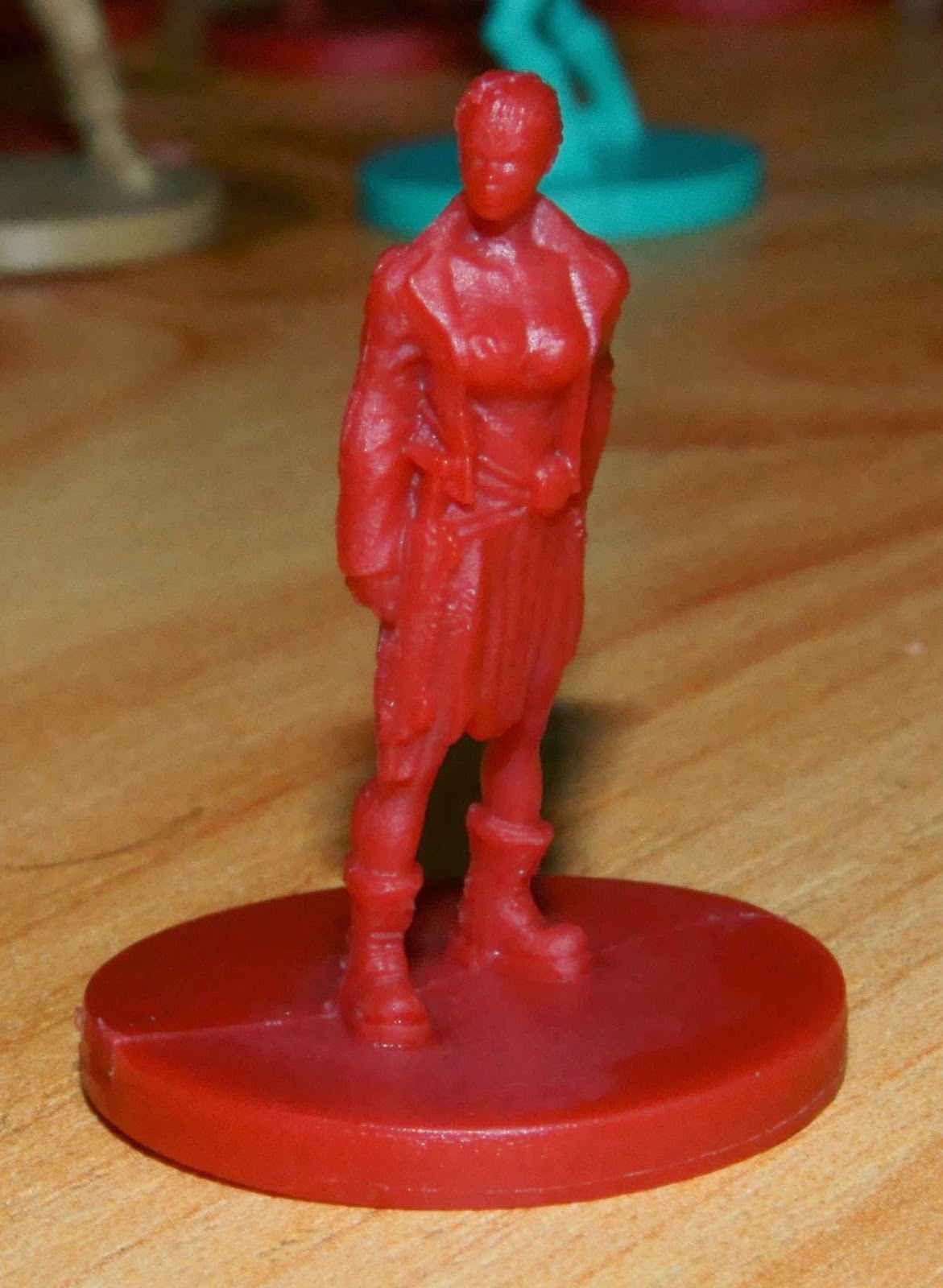 The minis are in true 28mm scale, rather than the 'heroic' scale favoured by many manufacturers, and the sculpting and level of detail is good (better than I was expecting to be honest).  There are of course mould lines, but these are no worse than on any hard plastic minis and a damn sight better than those on Mantics restic minis. 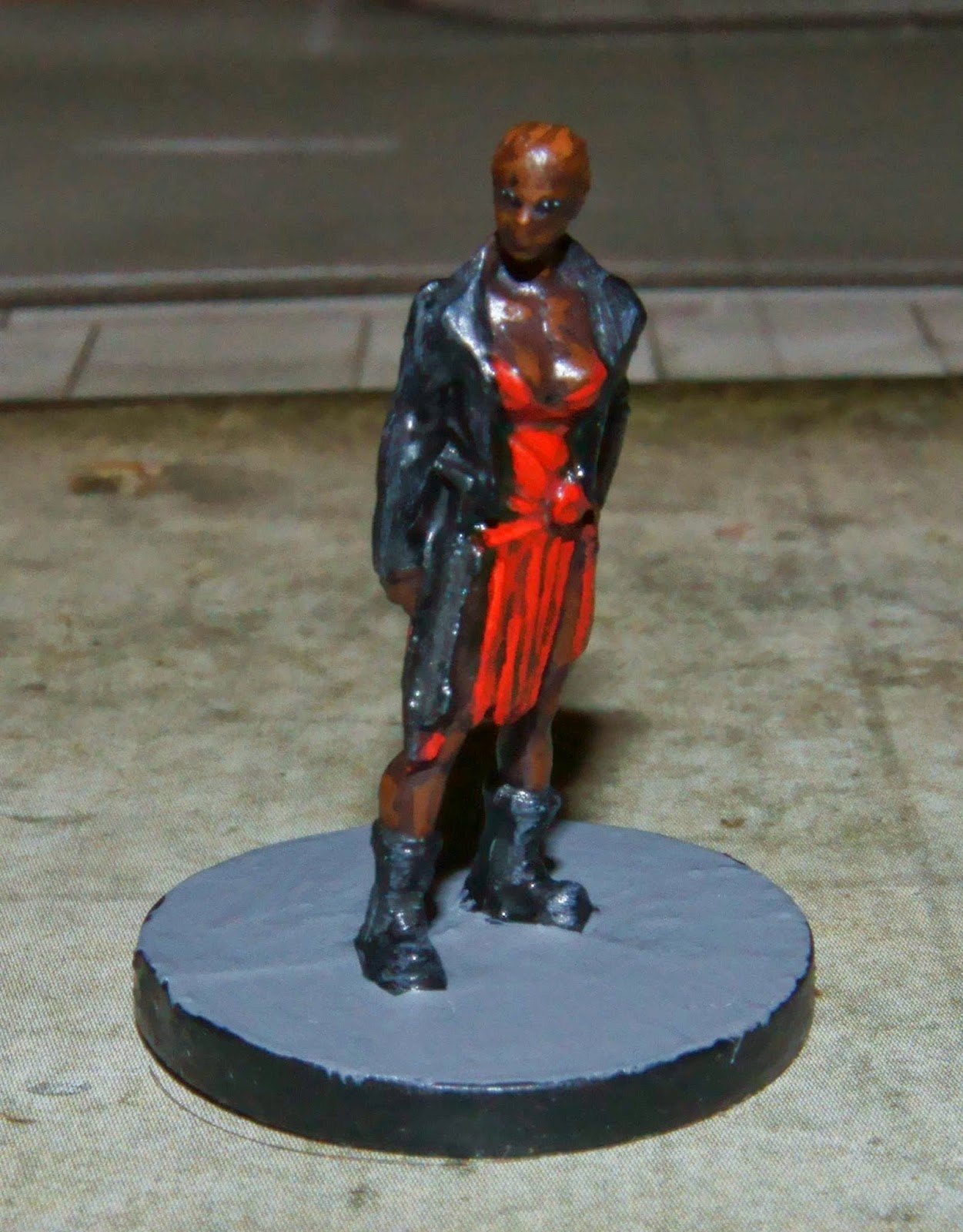 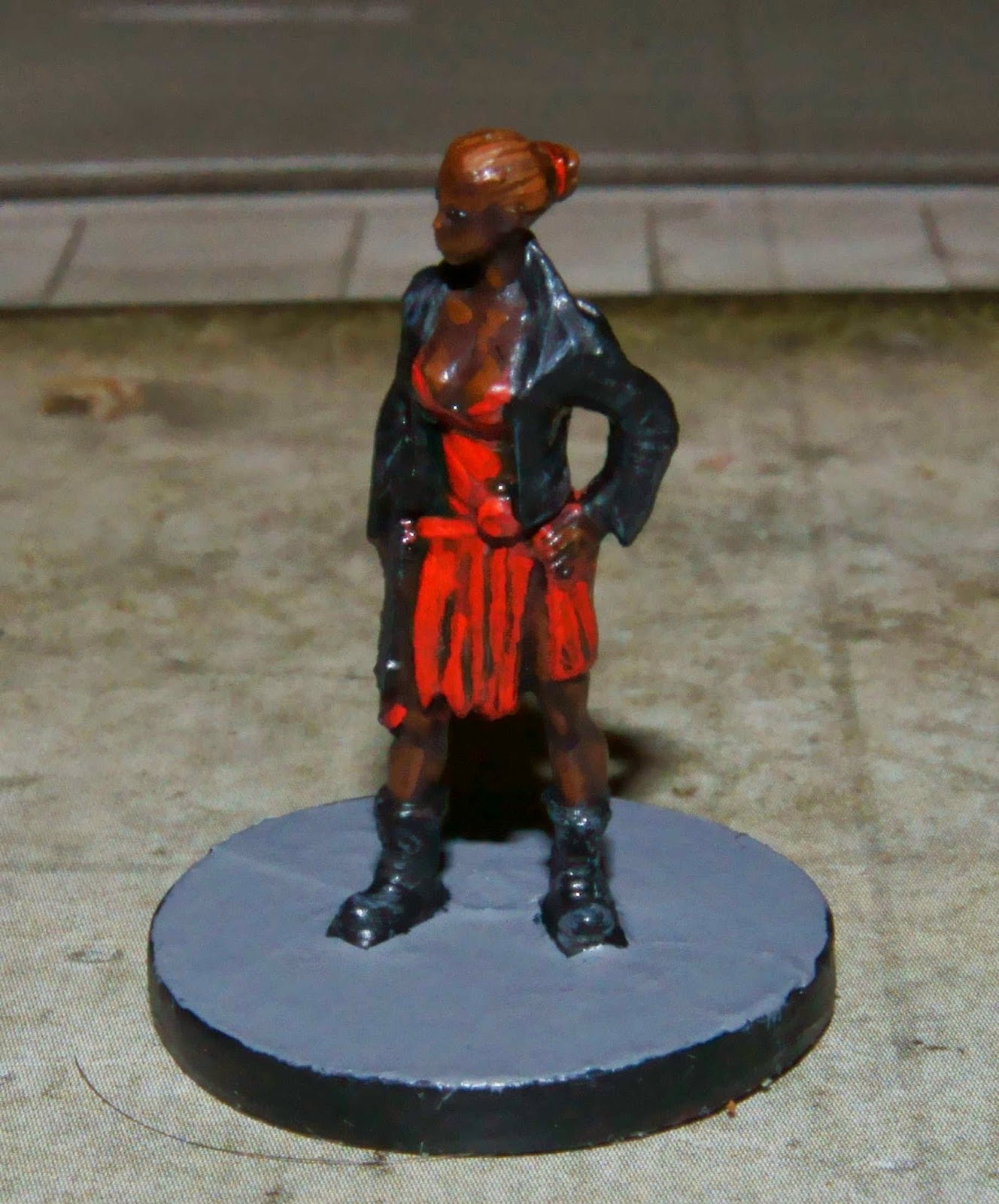 There's only one way to make a proper judgement and that to start painting, I selected the heroine Ashley (above), a sassy girl who fights the invasion in her prom dress.  The material didn't like my normal spray paint and she's come out a bit shinny, but overall it's not bad.  The next couple of minis I did I undercoated by hand and this produced a much better finish (Sir Edwyn and General Tor below).  The grey bases are just a temporary solution, I haven't decided how I'm going to base my Mars Attacks minis yet. 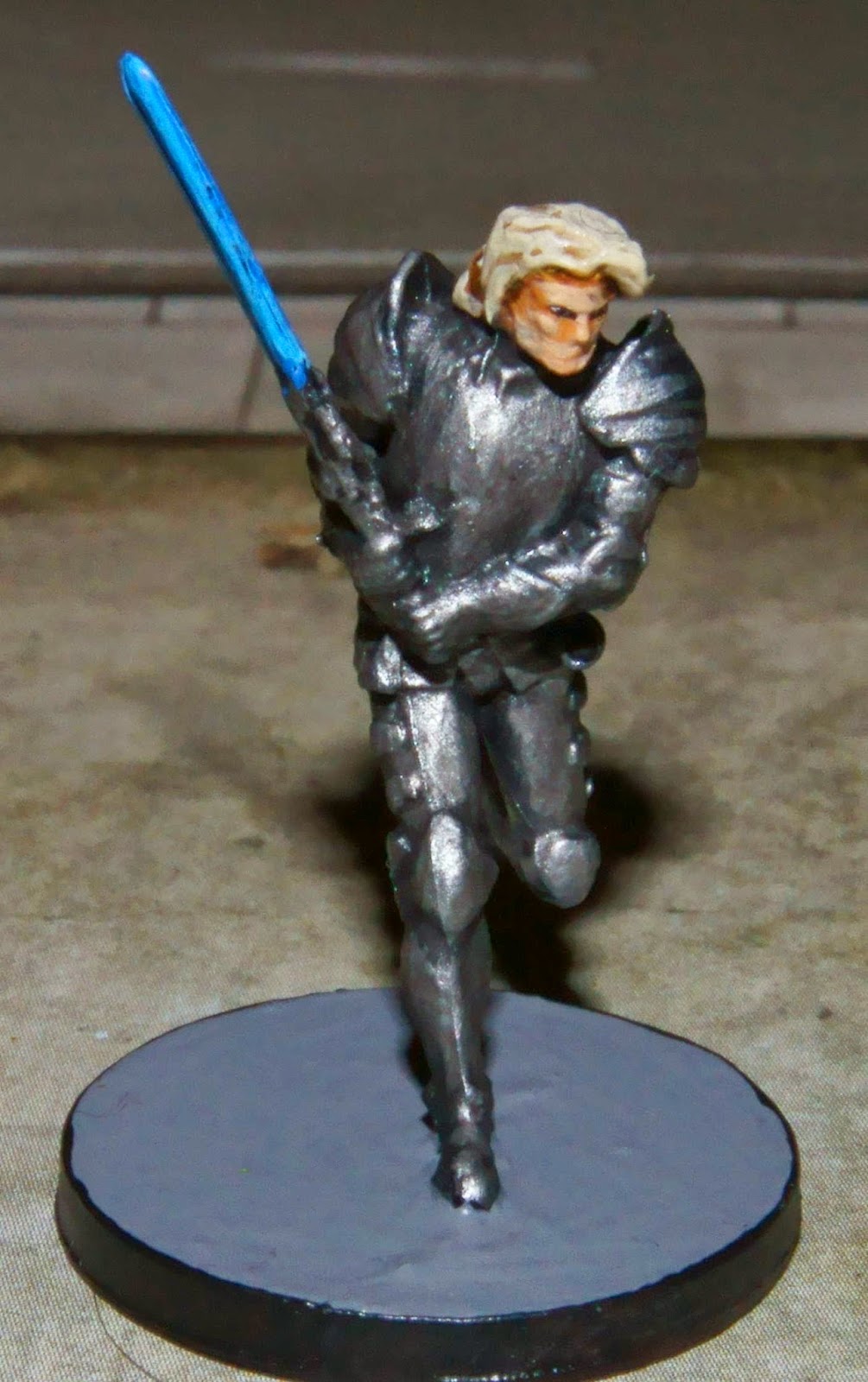 The second mini I had a go at is Sir Edwyn of Hoo a knight lost in time.  Not a huge amount of detail on this one, but a nice quick and easy paint job (about 15 mins worth) and we have a completed mini. 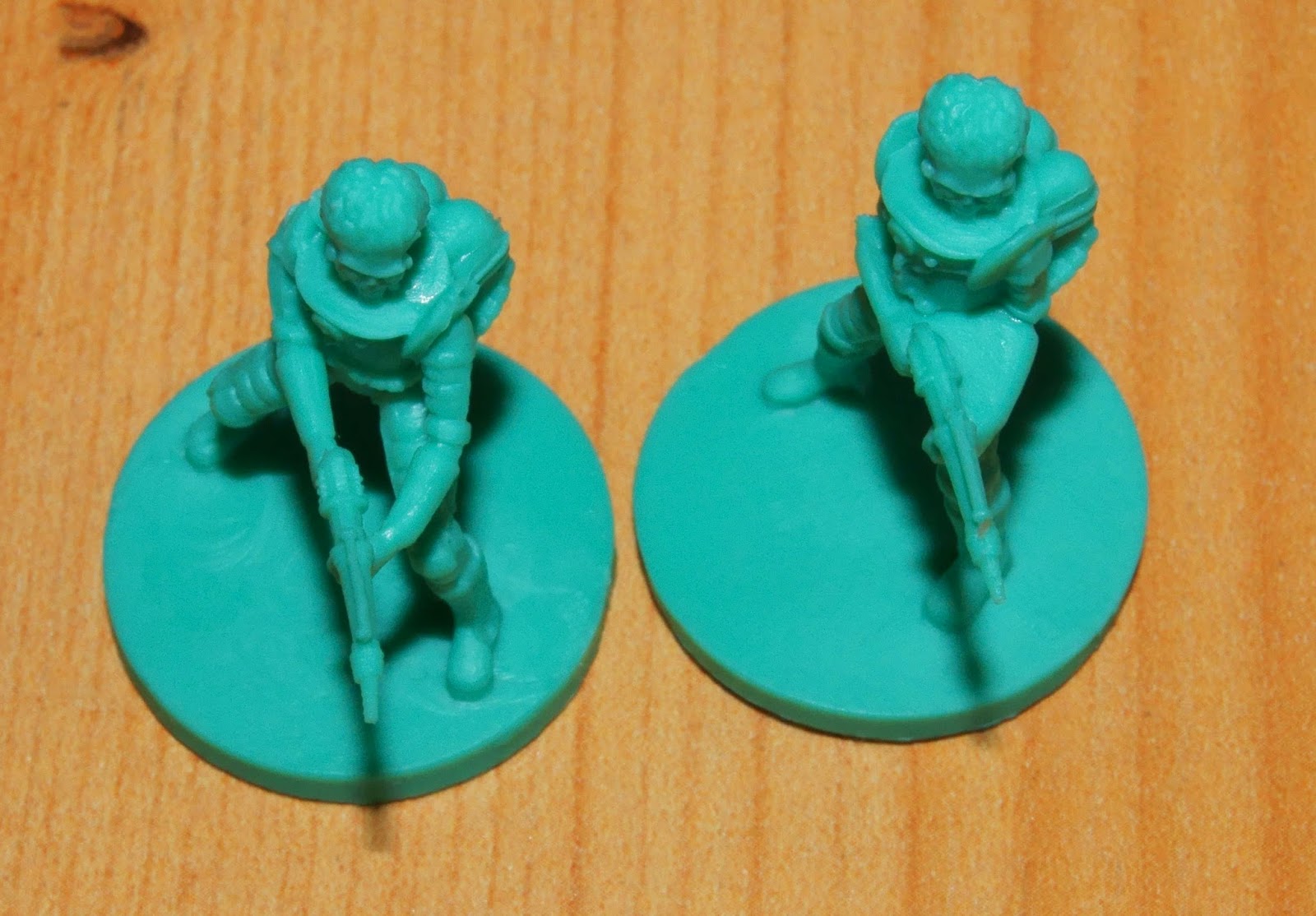 There has been some talk on the internet about the undercuts on the Martian grunts, well they exist, at least it exists on one sculpt.  Each pack of 10 Martians comes with one of the ones on the right in the pic above, which does have a ghastly undercut.  It's more disappointing as the Martian on the left above shows how a similar pose can be done without the horror.  For me whilst it is a slight disappointment it's not a deal breaker. 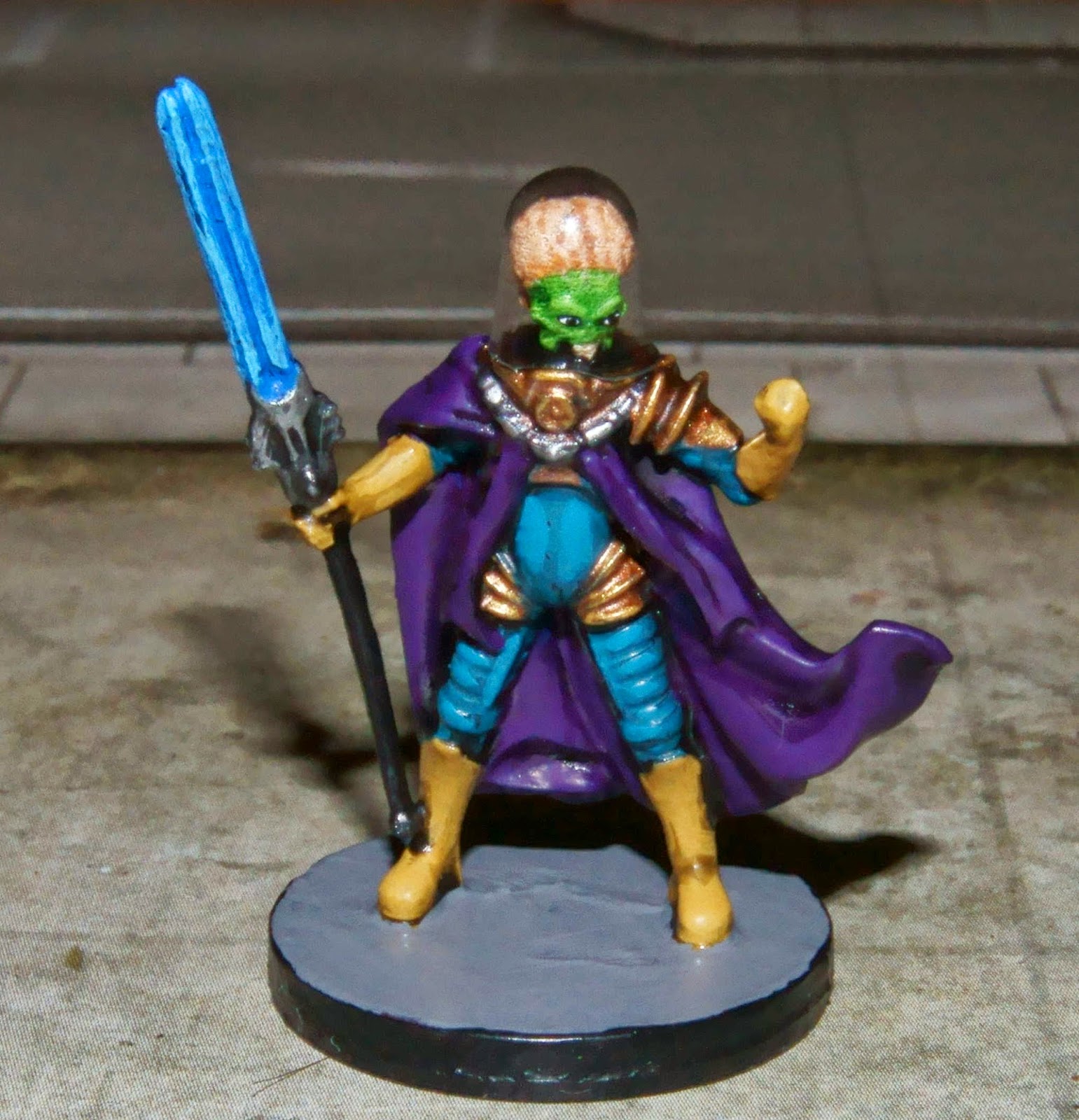 The third mini I painted was this Genral Tor, the Martian leader, he is by far my favourite out of the three and I'm rather pleased with how he came out.  Another issue I've read a few complaints about are the Martian helmets, and whilst I accept this is a single example it fitted fine and looks good.

Ultimately they don't compete in quality with a well engineered hard plastic mini (like anything from GW or Mantics own hard plastic zombies & ghouls), but they're not bad at all, they do the job well, and come at a price that I like.  I also think they are perfect minis for beginners, a big thumbs up from me!
Posted by brownk29 at 10:14:00