I recently bought the Flames of war starter set 'open fire' and as usual am sharing my thoughts on it.  As starter sets go it's not massive, it contains 5 tanks (3 American/British & 2 German), 5 dice, an introduction booklet, and the rulebook.

Lets start with the fun bit, the models.  The 5 tanks are all resin casts with metal gun barrels that need supergluing on, each of the tanks are slightly different and the shermans have sperate turrets. These are 'cheap' versions with single cast resin hulls including the tracks (most Flames of war models come with sperate metal tracks), I don't think the models really suffer for this and wish that Battlefront did more models like this at a cheaper price, the only difference is that the hulls go all the way to the floor, but I think it looks fine.  The Allied (they can be used by British or Americans) tanks are M4 Shermans and the 2 German tanks are StuG G assault guns.  They're nice models and the stugs especially painted up well, its just a shame there isn't a few more of them. 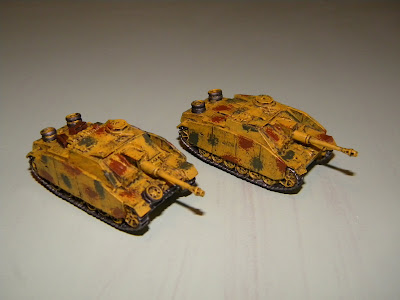 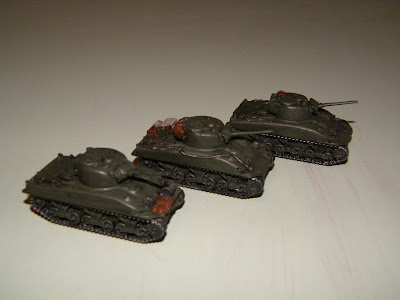 The box comes with 5 D6's, which are larger than the standard GW ones, 3 are green American dice and 2 are grey German dice.  They each have a symbol of that country replacing the 6, I like themed dice and these are a nice touch to the game, it would have been so easy just to throw a few normal dice in. 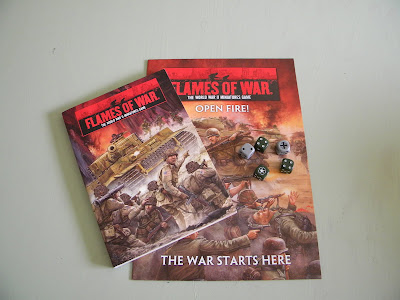 The books and dice

The set includes a 16 page large format starter booklet which has 4 scenarios intorducing you to the basics of the game using the models in the set, the fourth secnario however introduces infantry which are not included.  At the back is a useful colour scheme guide.  The scenarios are just teaching aids really and have no replay value, and the fourth scenario points to the truth, to play properly you're going to need more models.

Possibly the most importnat component of the set is the mini-rulebook.  Very much like the GW starter sets this is an A5 rulebook in full colour with the full rules.  The size, layout and even the order all feel like a GW book so if you have the Island of Blood you will know what to expect, also like GW if you want an army list you need to buy other books (although there are a few avaliable on their website).  Its a high quality production, I can't really comment on the rules properly as I've yet to play a real game, however I do like the fact that you get to rotate your tank turrets to point at your target.

Overall I think this set is reasonable value, and it was an efficent way to get another tank platoon and the rulebook, I would have liked it to include at least one briefing (army list) for the major factions, but there are some to download on their website. In the end I just wanted more toys and would have prefered a  big £50 to £60 pound set with a bigger variety of models.