Islands In Victory at Sea

I had a game of victory at sea today, but we decided to try something different, the simple change of adding some islands to the sea.  There's no rules for islands in the book, so we simply said that islands blocked line of sight, and the shooting line between the centers of the two ships couldn't cross land (not entirely realistic, but it worked out fine), and that obviously you couldn't sail over them.  I don't actually have any islands, but my warhammer hills stood in nicely. 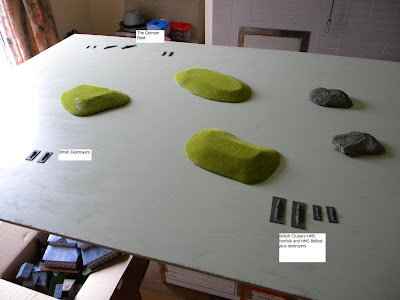 The deployment:  The Kriegsmarine all deployed as a single squadron in the corner, the RN split itself, with 2 destroyers on the left near the Germans hoping to use the island to pounce on and torpedo one of the bigger German ships and on the right the 2 cruisers with a escort planing to sweep round the top island to get close enough to the pocket battleship so that they could at least return fire when it starts pounding them. 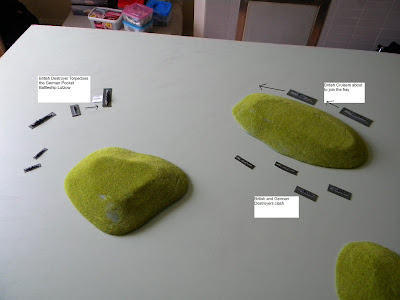 After a few turns of manoeuvering a British destroyer torpedoes the Lutzow crippling it as the Belfast and Norfolk round one of the islands to bring their guns to bear on the German fleet.  The british lost 3 destroyers, but neither of the cruisers suffered more than a couple of points of damage, the German fleet consisted of a single lone destroyer when the Germans conceeded.

The islands really helped add more manoeuvre to the game (which is what we were hoping for) and added a pleasing visual aspect as well, next week we're hoping to do something similar, although this time with Japanese and American Battleships somewhere in the pacific,
Posted by brownk29 at 20:32:00