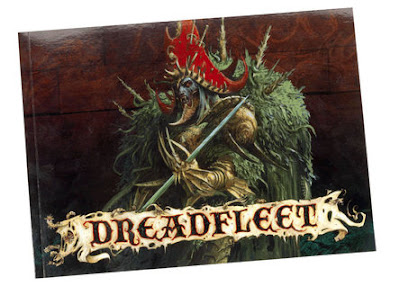 Games workshop have announced a new game, its not Man 'O' War as a lot of poeple were expecting, but it is a naval game set in the warhammer world, which is quite close.  Its a one off limited release all in one box in the same way Space Hulk was a couple of years ago.  I still love my copy of Space Hulk and those that read my blog regulary will know that my gaming has taken a nautical turn ever since my trip to Portsmouth back in the spring, so it was inevitable that a warhammer pirate naval game was going to be of interest to me. 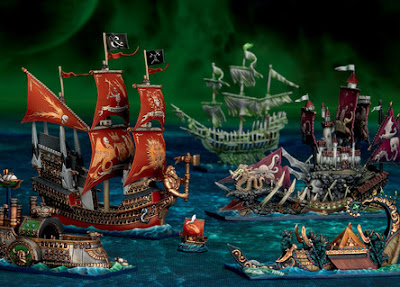 It all looks very pretty, with 10 unique varied big warships, which are a mix of empire and undead plus a dwarf and elven ship, also what appear to be little ships, a dragon and some islands.  Plus a rulebook and a big blue mat to play on, in fact here is the list from the GW site on the contents

I don't know anything really about the rules yet, but apparently it's scenario based like space hulk or dwarf kings hold. 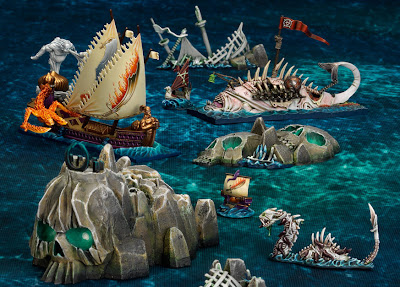 The price is £70, which for a big board game full of stuff is fair I think, and I'm willing to pay it.  What I don't understand is why it's limited release and why if its successful they will still refuse to expand on it, surely they would just make more money, oh well.  I've preordered it and am looking forward to it arriving, so expect a full unboxing post in a couple of weeks.  I hope it does well and GW continue to release big boxed games outside of their core systems, I still live in hope of a warhammer quest delux.  What's also worth noting is that this is my first significant purchase (ie not a pot of paint) from games worksop since my one finecast model back in the early summer.

Anyway I'm off to watch some pirates of the carribean movies, bye for now.


All imgaes copyright Games Workshop, used without permission.
Posted by brownk29 at 20:09:00