Dreadfleet - A First Glance of the Rules

On yesterdays what new today post GW finally gave a few galnces of the rules of their new game Dreadfleet by going through a game turn. What did we learn? I'm not going to repeat the whole article, but heres the bits that intrigued me.

Firstly the game is scenario based like Space Hulk or Dwarf Kings Hold and the game contains 12 scenarios, and as each fleet is different thats 24 tactical challenges, which isn't bad.  Of course we have no idea yet as to the quality or balancing of these scenarios.

Movement seems to follow a standard sort of naval movement system and the wind will play a part.  The ships seem very fast at first glance, but we'll see.

Ships actions alternate rather than an I-go-you-go system, this is a system I really like. 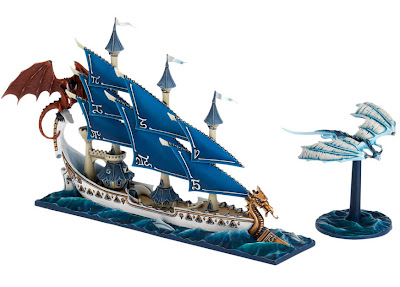 The dragon launches from the elf ship, the little dwarf airship thing I saw launches from the dwarf ship in the same manner.  Athough oddly the dragon on the ship and when launched ahve been painted as different colours, I won't be doing that with my models.

You seem to draw a fate card each turn to add some randomness to the game, not so sure about this, lets hope they're not overpowered, but if they are they look like they would be easy to drop.

Overall it looks interesting and fun, if a bit random, and I'm very happy I have it on pre-order.
Posted by brownk29 at 19:59:00