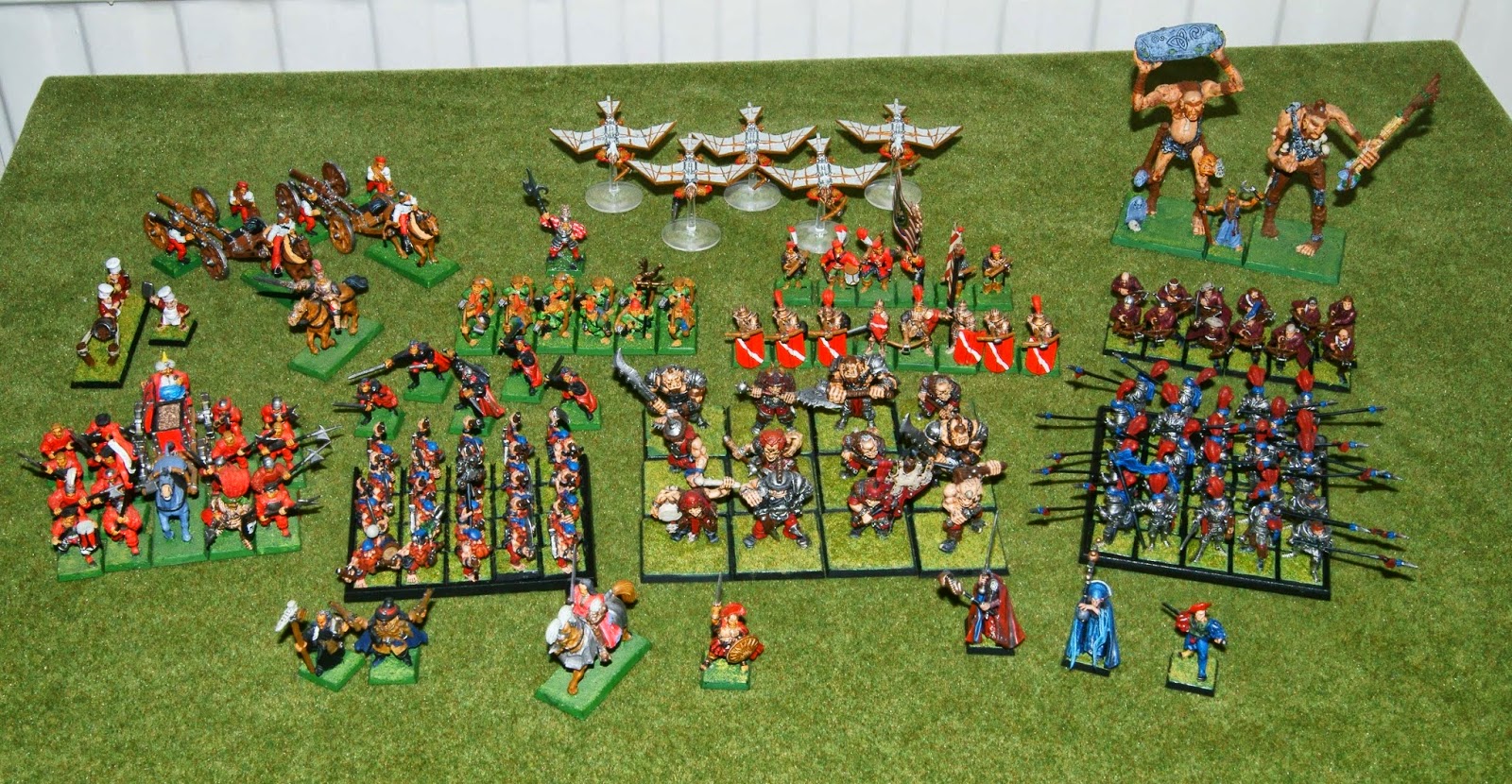 It's been over a year since I last dug out one of my collections of painted minis for a photo-shoot (although there has been a couple of looks at some prepaints inbetween), this time I've settled on my Dogs Of War army for Warhammer Fantasy. 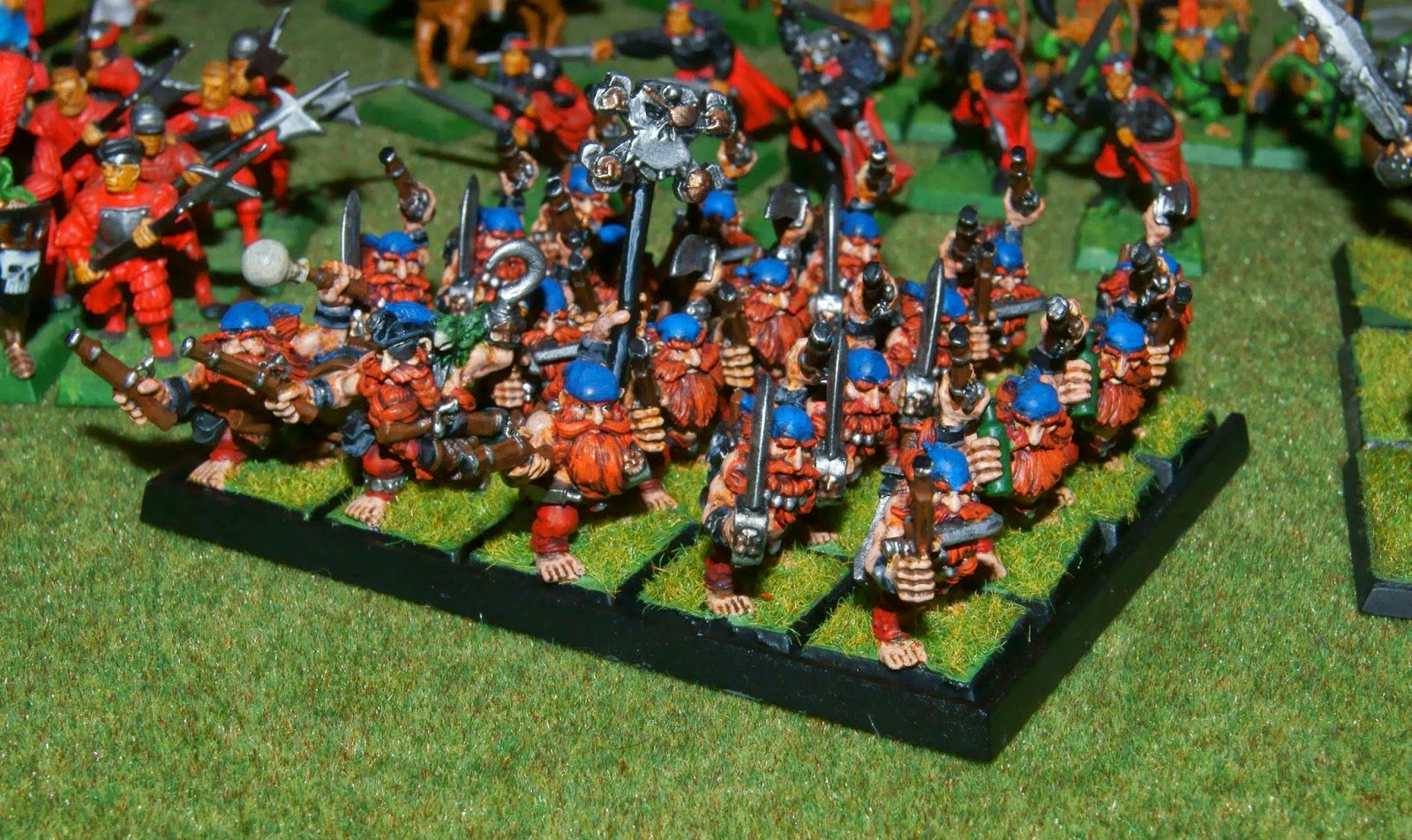 Dwarf Slayer Pirates, my favorite unit in the army

I started this collection back towards the end of 5th edition when the Dogs of War army book was released.  At the time it was a great innovation, a selection of wacky units that could either be fielded as a complete army of mercenaries or added to normal armies to add more variety (although I won't deny it was open to some abuse).  GW also continued to add more of the 'Regiments of Renown' in White Dwarf.  I enjoyed fielding this army at tail end of the 5th edition period, but one thing that always bugged me slightly was the lack of 'generic' mercenaries, everything had to be special unit, almost always led by a hero. 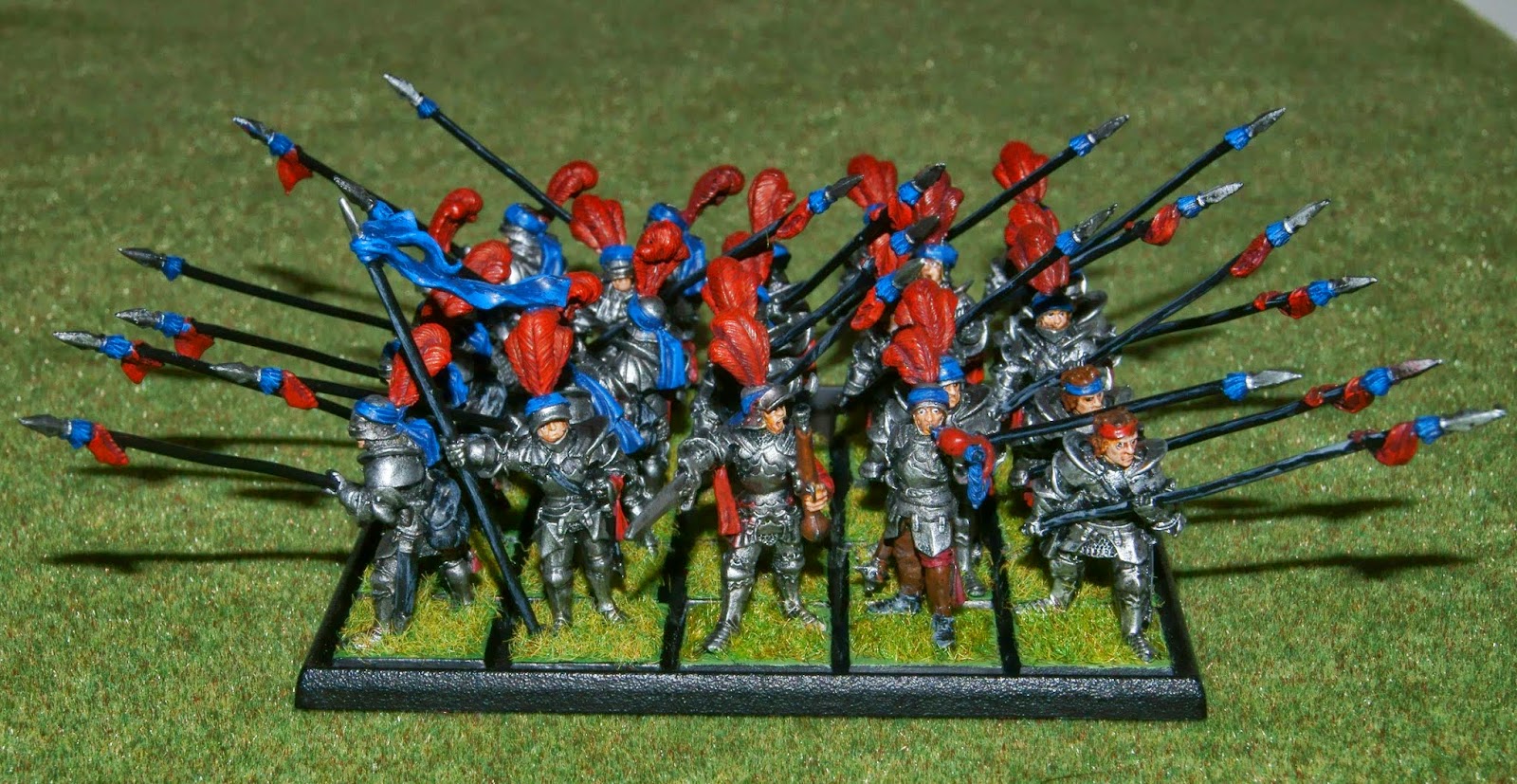 Then came along 6th edition, and all the previous army books were thrown out in one go and the game radically reworked.  A couple of PDF's were released with what ere supposed to be 'get you by' lists until the books were done.  Dogs of War never got a new book and I'm stuck using those lists to this day, however, the lists aren't actually that bad. 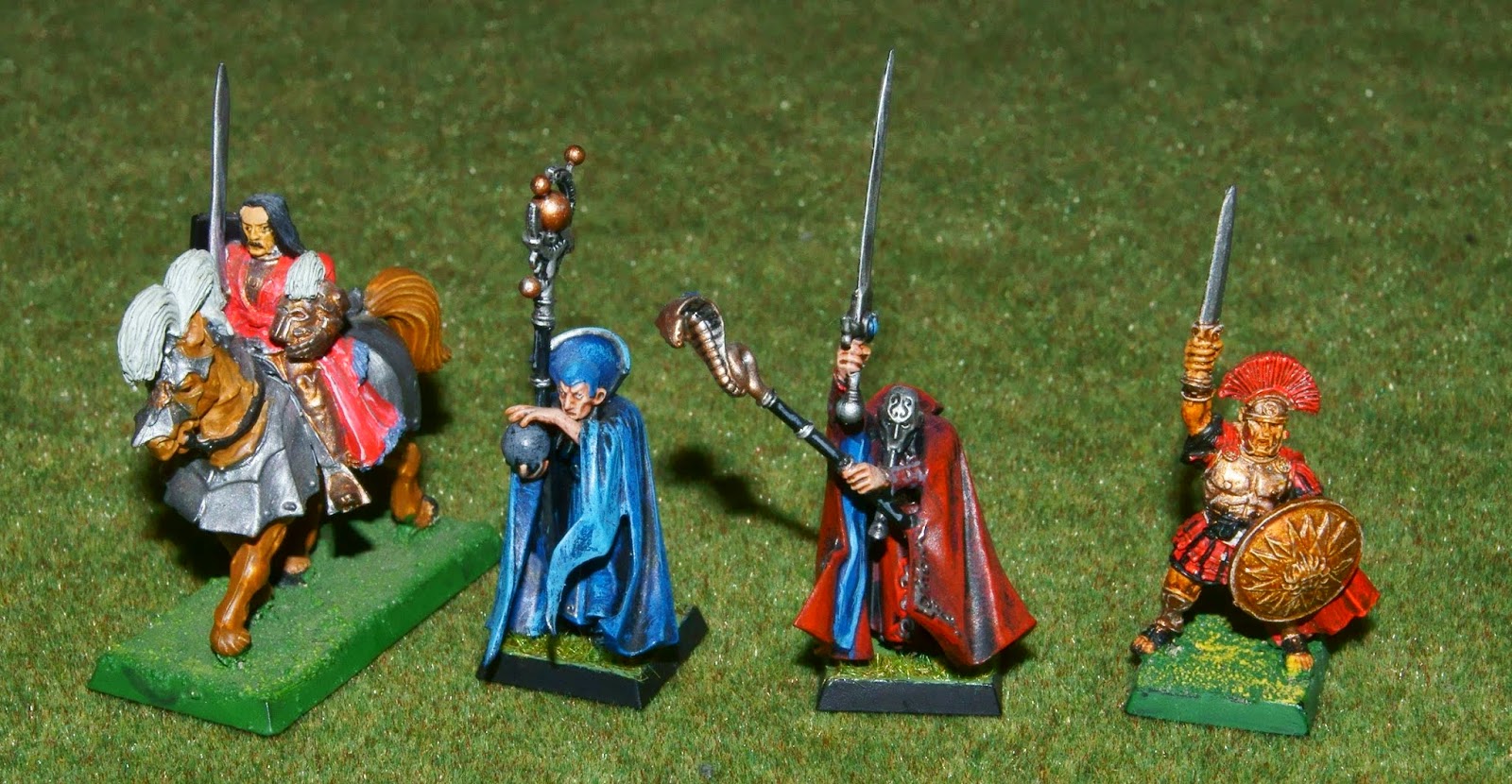 Inevitably with such an old list Dogs of War sit low on the power curve, but there's a lot you can do with these flexible lists.  They provide the best of both worlds, the 'Dogs of War' list is a generic list featuring normal unnamed regiments, such as heavy cavalry, light cavalry, dwarfs, marauders, pikemen, crossbowmen etc.  Then you have the 'Regiments of Renown' list which features all the special regiments from the previous book and White Dwarf, and you can use these regiments in an army based on Dogs of  War list.  It's good because you can theme a Dogs of War army however you like, but still add the wacky (and sometimes powerful) Regiments of Renown. 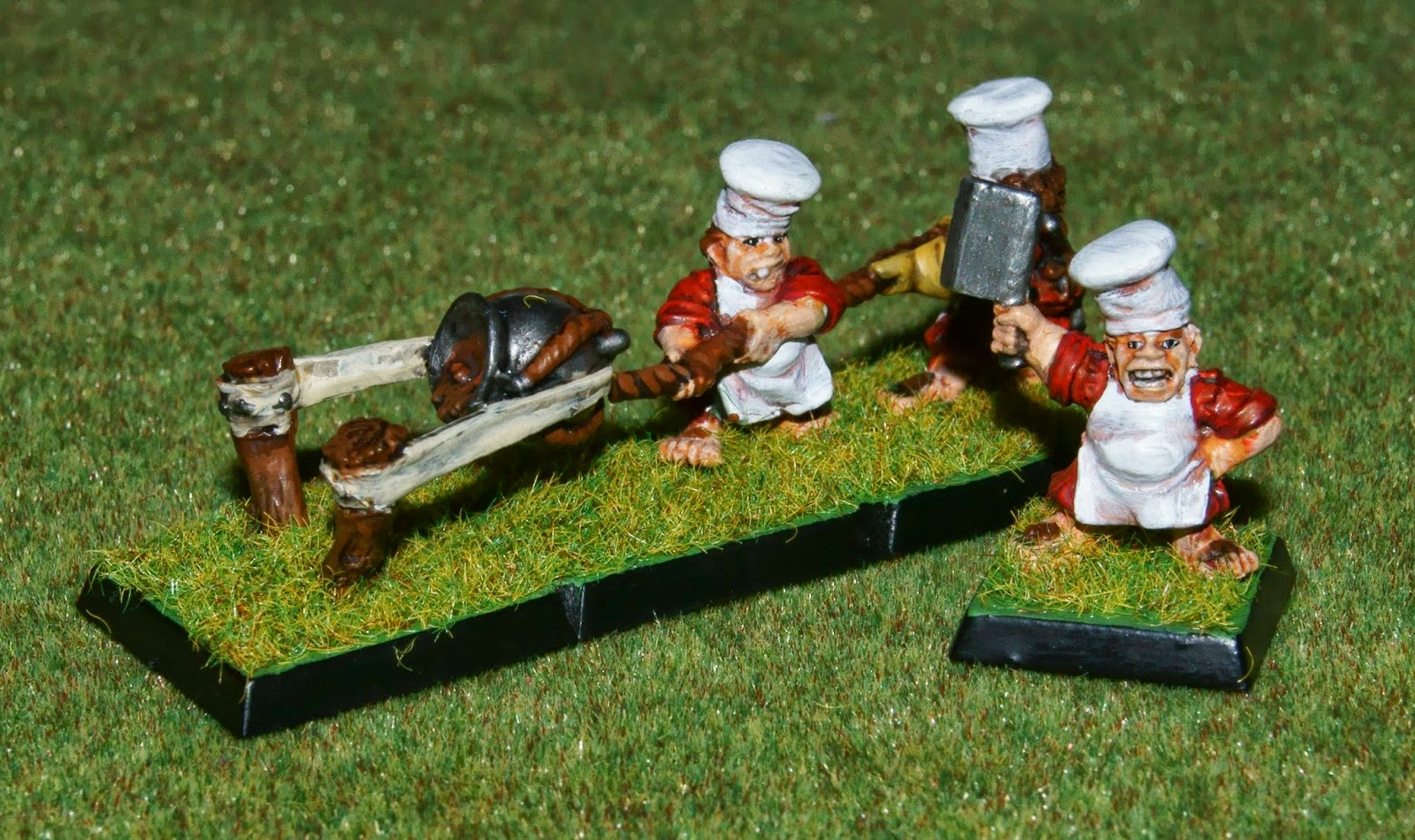 There are two painting eras shown in this army, as easily seen by the two basing styles, the older style ones were painted when I was about 16, and the flocked ones after I returned from university.  I'd like to find the time to repaint the older part of the army, but it's not on the current priority list.  I'm not really planning on adding anything else to this army either, but it's still a collection that I enjoy and wouldn't want to part with. 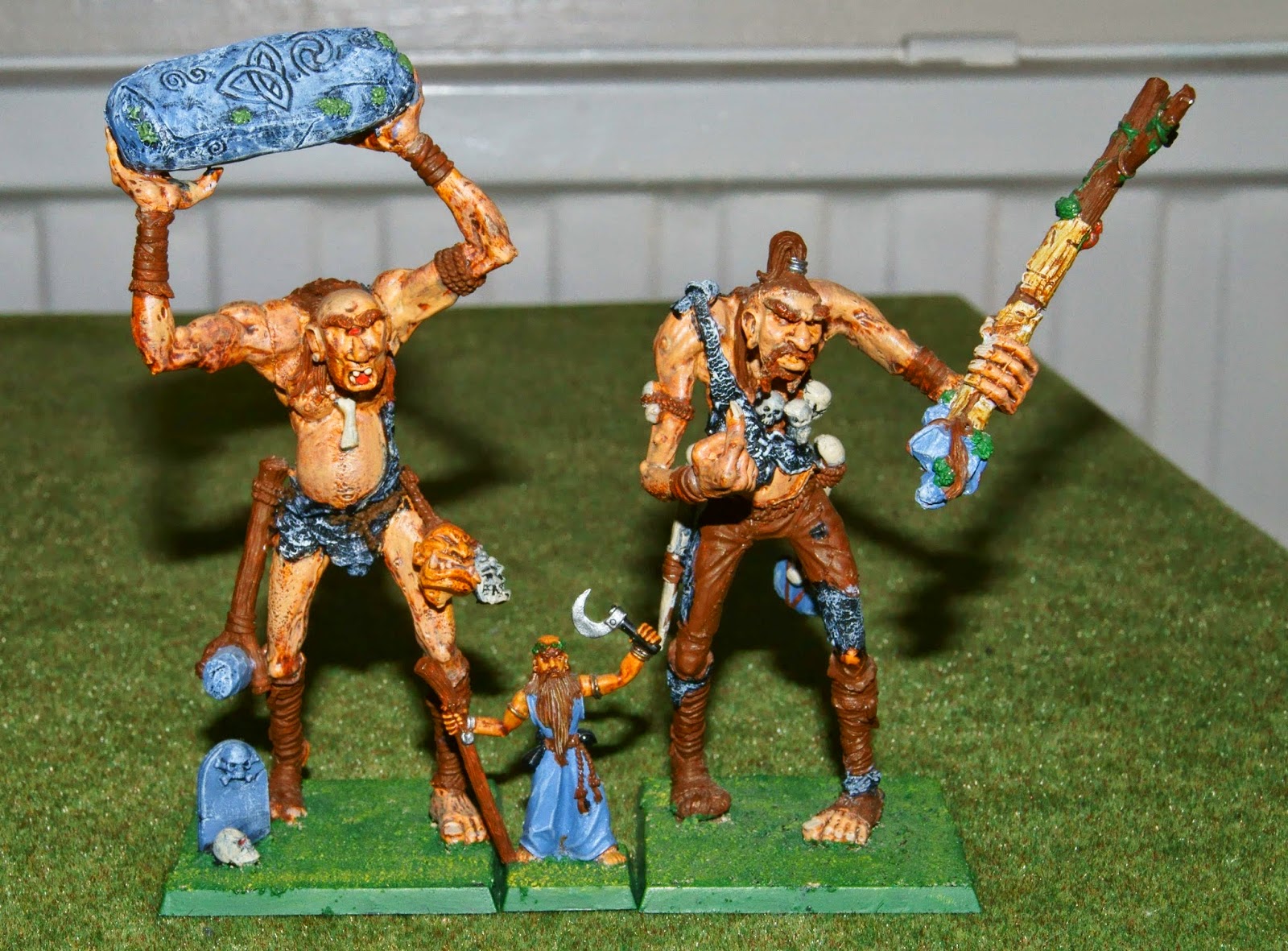 5th edition; when two giants and a wizard was a suitable regiment

When being used this army is often joined by Dwarfs from my Dwarf army, Marauders from my Chaos army and any cavalry I can lay my hands on to represent light cavalry in particular, but occasionally some heavy cavalry can add a little punch.


A little while ago now Reaper ran an insanely successful Kickstarter for their new 'bones' range of soft plastic fantasy and sci-fi minis.  I was very tempted to join in on the Kickstarter, but in the end the international postage put me off.  Ever since then I've been meaning to pick up a couple of pieces to see what they're like.  Our recent obsessive playing of Warhammer Quest has given me the excuse to add a 'Great Mummy' which stands in as a Tomb King in our dungeons. 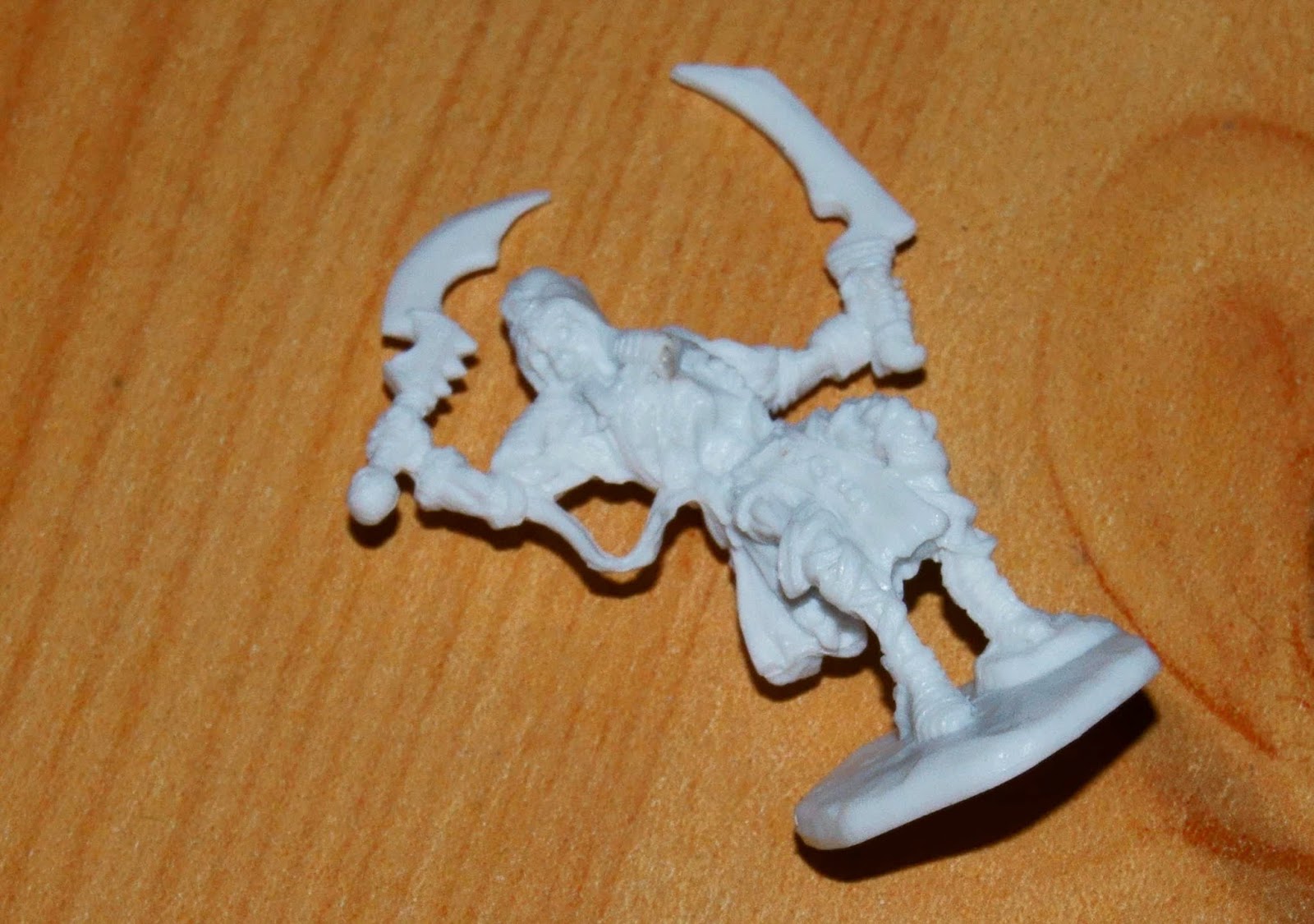 What arrived is shown above, a slightly squashed soft plastic figure.  It appears to be similar plastic to the Mantic Mars Attacks stuff that I got recently.  The squashed problem was easily solved by immersing the figure in nearly boiling water. 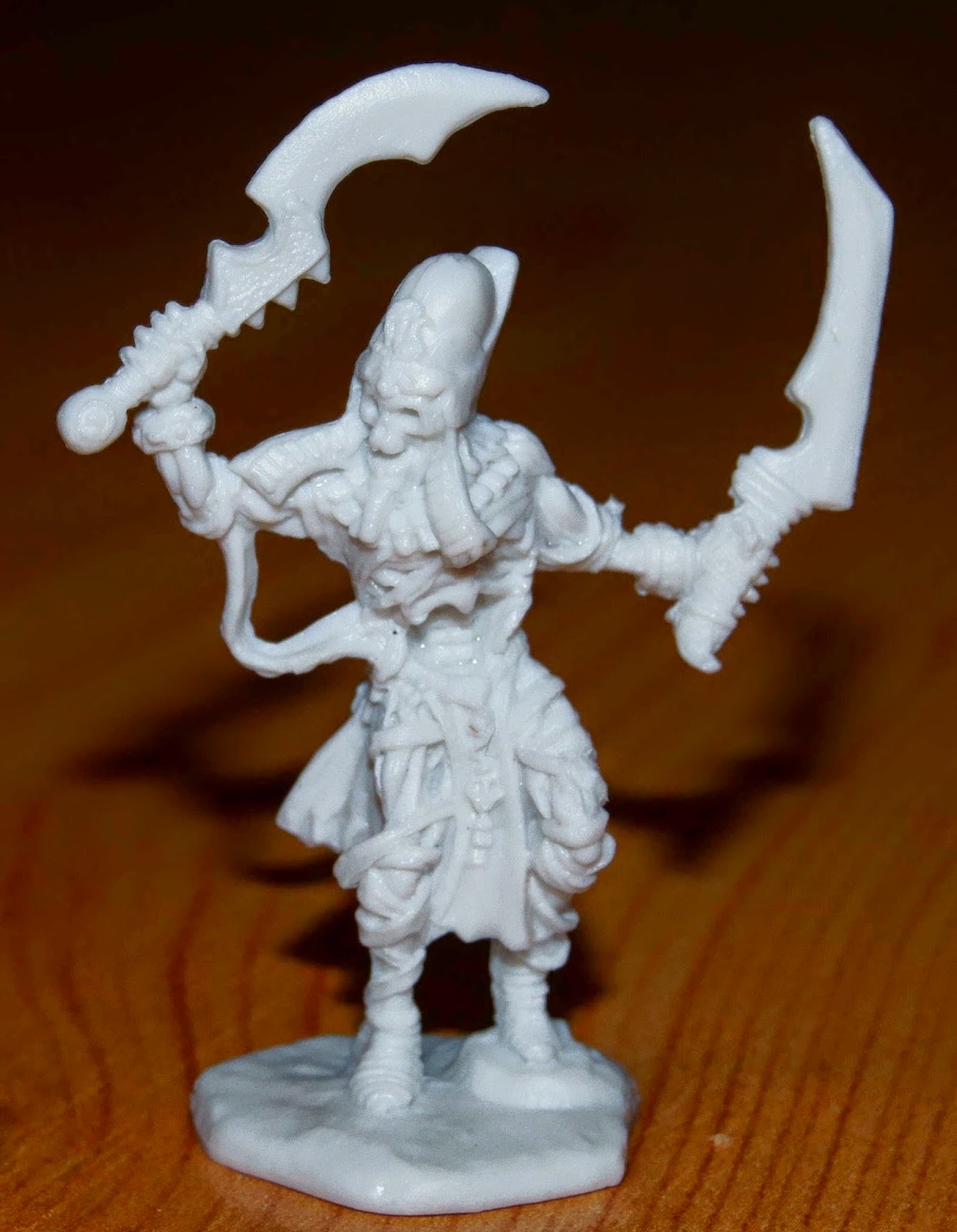 The detail is pretty good, better than I was expecting to be honest.  Although looking through the range the sculpting quality does seem very variable. 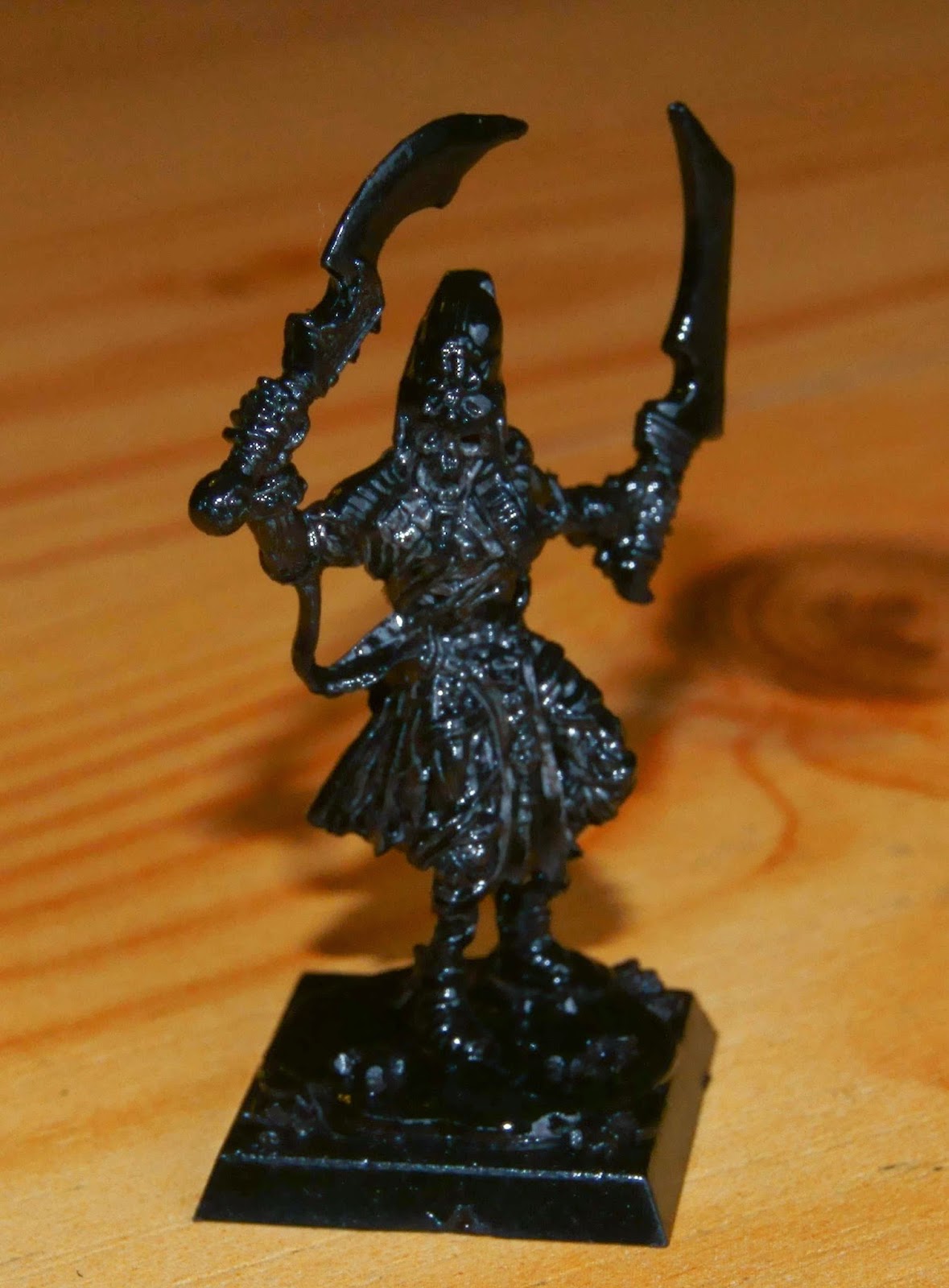 Next I based and undercoated the mini.  I used my normal enamel undercoat and it came up very shinny and a little bit tacky, I was a bit worried at this point that it wasn't going to take the paint well. 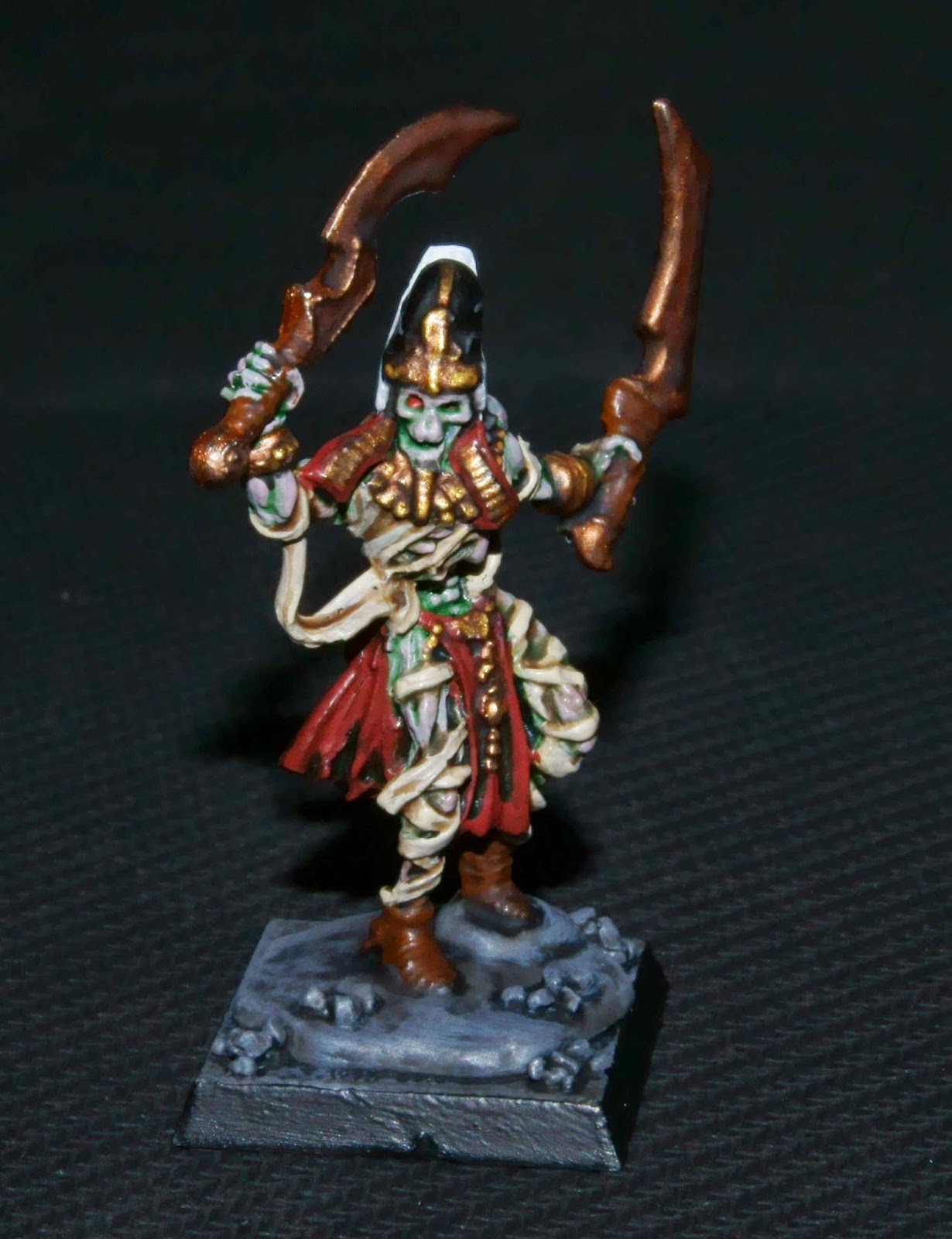 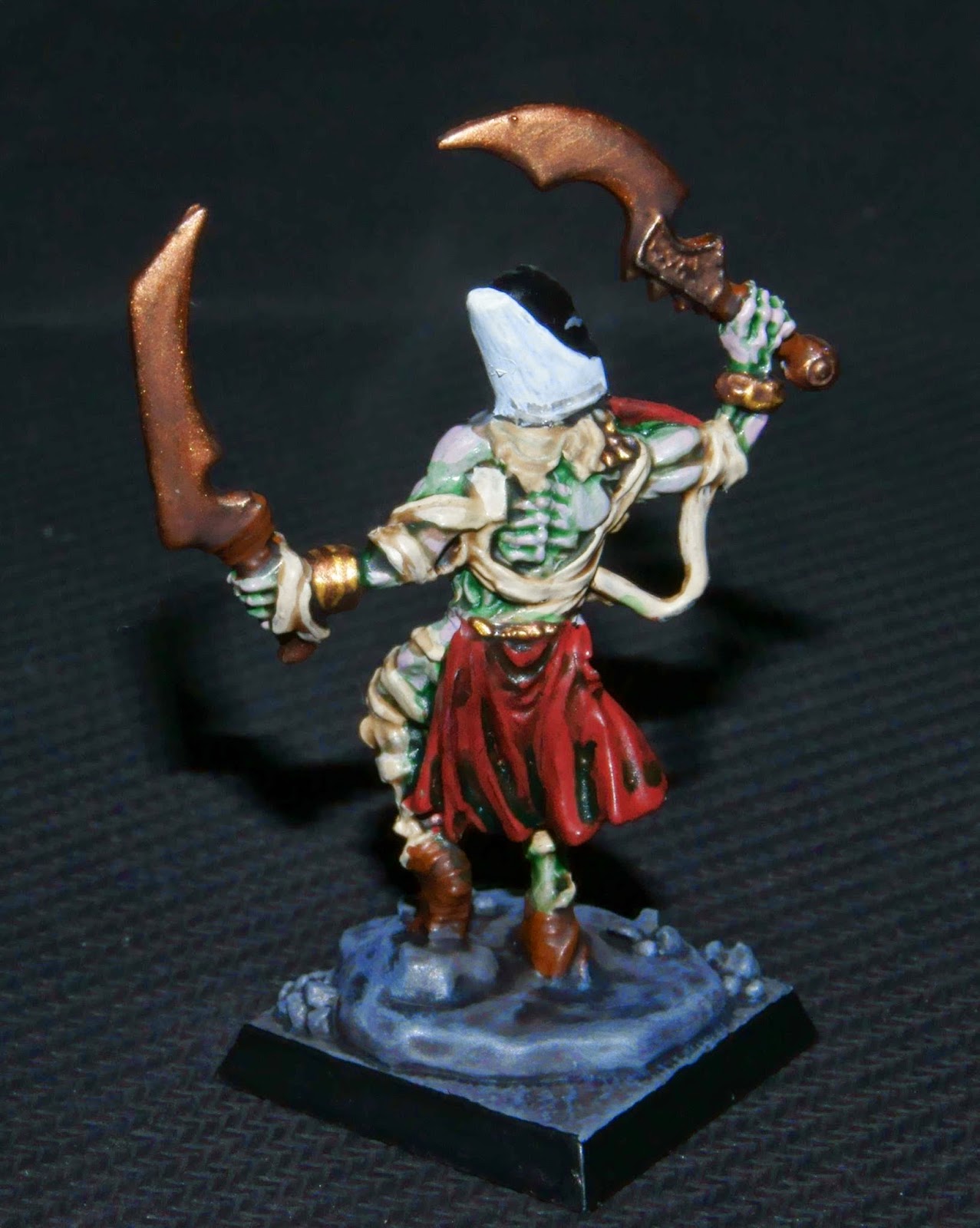 However once I got painting all went well and I got the result you see above.  Overall I'm really quite pleased with this chap, Reaper Bones figures are very cheap and the range is massive, as I mentioned before the quality does vary, but there's a lot of useful figures to be got, especially for filling up dungeons.  Also being soft plastic they're quite hard to damage. 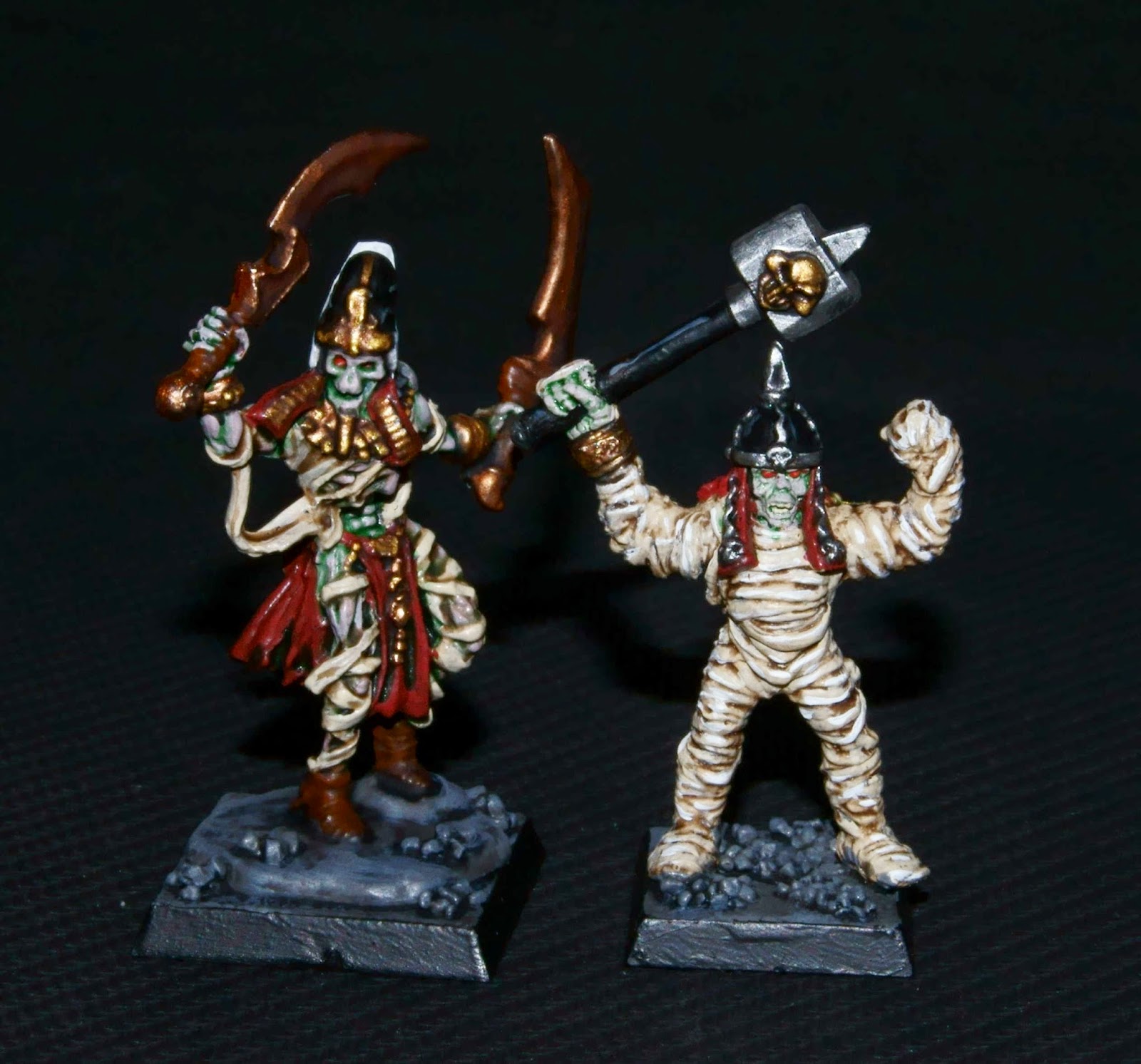 One last point is that he was a bit bigger than I was expecting, towering over my classic GW mummies.  I'm not sure if this is standard for the range or not, it might be because he is a 'great' mummy.  Monsters come in various sizes anyway, but a towering bunch of humans might look a bit odd compared to other manufacturers if this is standard size.
Posted by brownk29 at 11:01:00 1 comment: