Another day out in London at the weekend, part of my itinerary included two military museums, first stop was the guards museum just off St. James park 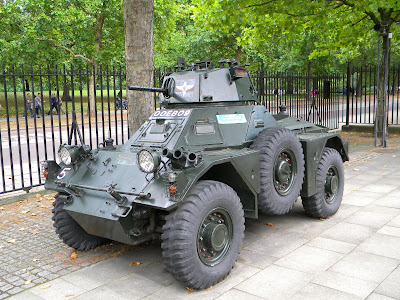 A Ferret Armoured car outside the Guards Museum

It's a small museum, but very full of artifacts, uniforms and history, telling the history of the 5 regiments of footguards from their formation upto the present day.  It took me just over an hour to walk round, and I read most of the information boards.  One section I found particulary interesting was that of the sudan conflict with several items taken from the dervishes on display.  The active service and ceremonial duties of the footgaurds are both covered.  The very personal nature of a lot of the items on display was nice as well.  And prehaps inevitably the old regimental drums on display were particulary impressive with some superb detailing.  The museum charges £4 for an adult entry, which was fair I think.

After leaving the museum I walked round St. James park and took a stroll around horsegaurds parade which features statues of the Victorian heroes, Feild Marshalls Wolseley, Roberts and Kitchener. 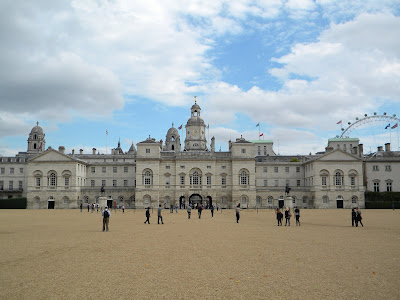 Then it was off to the National Army Museum, this attempts to cover the British army from its inception as Cromwells new model army upto the present day.  However most wars are only touched on (a space issuse I'm sure) the museum has two main galleries, one which covers the napoleonic, crimean  and colonial wars, and the other that covers the world wars.  There are a few other smaller galeries as well such as the Boer war and Korean war galleries.  I found the Napolenic and colonial gallery the most interesting, and if I'm honest I thought the World Wars were covered much better at the Imperial War museum that I recently visited, I do feel it might be better if this museum concentrated solely on wars pre 1914 and then let the Imperial war museum cover wars after that date, so a lot more detail could be gone into whilst not repeating stuff done better down the road.  There was a fantasic large scale model of the battlefeild of waterloo with a good audio-visual guide, and, oddly I thought, next to it was the skeleton of Napoleons horse. There's also an art gallery on the top floor, but I wasn't allowed in there as someone was giving a talk.  Overall I found the museum a bit general with little specific information, but it is free and did have a few bits of interest, just don't expect it to take all day to look around.

Neither museum allowed photography inside, which was annoying, but still I had an interesting couple of hours.
Posted by brownk29 at 18:25:00