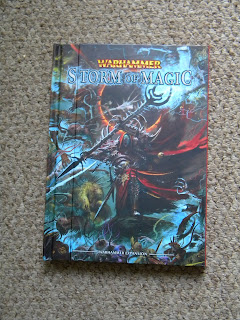 The book is hardback and full colour throughout (like the new big rulebook and army books).  This is something I approve of even if it does increase the price, I like to keep my books a long time and treasure them, I like the added durabilty of hardback a lot.  The hardcover actually goes all the way round the book as well which is a bit odd, but I think works, the cover is held tight by magnets embedded in the book 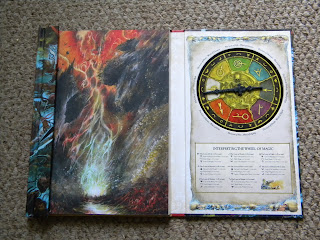 The front cover opens out to reveal a magic spinner, which is a lot higher quality than I expected and if you're careful it should last a long time.  The back page has the ever useful reference sheet including stats for all the new monsters.  Throughout the book is the usual lavish artwork you would expect, I was particulary impressed with the two-page spread of the artwork form the 'Caledor' novel.

The book describes all the rules needed to play a storm of magic battle, when the winds of magic surge more powerfully than normal and mighty monsters come from the mountains to join the fray.  It resolves around the control of 'fulcrums' that are both the objective of the game and give wizards the ability to cast new awesomely powerful spells.

The book starts off with a nice background section describing a storm a magic and fitting them into the established background.  It then moves into the rules for the storm of magic scenario including fulcrums, magical flux (the spinner thingy) and the new cataclysm spells (every race gets at least one) and dwarf ancestor runes.  Next is a selection of frankly ridiculous magic items, including a floating watchtower and the dodecahedron of continental drift that allows you to swap over two modules on a modular gaming board, fun but nuts.  Next we get a few pages of pictures of painted wizards and then two other scenarios using the rules in the book.  Next is some rules for different types of sorcerous terrain just in case you wanted a bit more randomness.  And finally the last half of the book is taken up with the monster section.  This contains all the rules you need to add over 45 types of monster to any army and includes dragons and manticores as you'd expect, but also pack of chaos hounds, forgeworld mammoths and giants, and what I really like is they've bought back some older denzins such as great taurus, truthsayers, and even Zoats and Fimirs.  It also allows you to make pacts with undead or daemons and add them into a storm of chaos army.

Theres actually an awful lot of content in this book, and I think the inventive scenario desiger could make a lot out of this without having to go for a full on 'storm of magic' battle.  As for storm of magic itself, it looks a lot of fun, but I wonder how balanced it's is going be and I'm sure that with all the new options there are going to be some broken combinations.  I like the return of unridden monsters and I'm a big fan of objective based battles rather than just trying to wipe out your opponent.  I think its a high quality product with a lot of content.
Posted by brownk29 at 20:14:00

Email ThisBlogThis!Share to TwitterShare to FacebookShare to Pinterest
Labels: storm of magic, warhammer