Tribes of Legend - A Book Review

I love greek mythology, I always have, I love reading the epics and I love many of the movies based on it (and am still firmly of the opinion that clash of the titans didn't need a remake) so as soon as I heard Jake Thornton (ex white dwraf editor and author of the dwarf kings hold series, which I like rather a lot) was writing a book allowing you to wargame the 'period' I knew it was inevitable that I was going to get it. 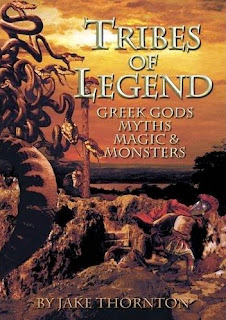 The book is published by wargames foundry and is just over a 100 pages long, has a nice hardcover and is in full colour throughout.  It's fully illustrated with lots of photographs of the new tribes of legend range from foundry, and there are several pieces of full page full colour artwork which I think are rather good.  It's a good high quailty production product.

The book contains 3 games, a mass battle game called 'tribes of legend', a skirmish game called 'ancient heroes' and a solo game, 'trials of a demi god'.  The book also has a lot of hobby material including painting guides for most of the range of models, a guide to making rivers and a guide to the greek gods.

The first game is the game of mass battles called 'tribes of legend' from which the book takes it name.  As a mass battle fantasy game I think it falls somewhere between warhammer and kings of war, I say this due to the way units work, you remove figures until half of them are dead and then remove the rest, no two men units left wondering around.  All measurement is taken from the unit's leader which makes things nice and simple, in fact I think the movement rules are really quite elegant.  One major difference between this and the other games I've mentioned is that tribes of legend works on an alternative unit activation rather than moving all your forces at once, this is something I really approve of, and it actually makes the game feel different from warhammer/kings of war.  The game comes with army lists for city states, amazons, hillmen, satyrs and centaurs.  This is the weakness of this game, whilst 5 lists sounds quite good they only contain 3 entries each which really limits the possibilites, also the game features none of the heores or monsters from the model range.  The core rules seem solid, but the lack of army options lets it down a bit, the amazons seem espeically odd as the chariot and cavalry feature in the book but there are no rules for their use.  Still it's fun enough and I have a city state army being painted up at the moment.

Ancient Heroes is a skirmish game where you take a group of 5 heroes and try to take control of a temple against other poeples bands of heroes.  It's a small sacle skirmish game that uses a deck of cards to resolve combat.  It's really innovative and different and works really well, although it does take a while which means that this game isn't scalable, you're not going to want more than 20-30 models on the table, this isn't a bad thing though and allows you to pick up a couple of packs of figures from foundry and get gaming striaght away.  Again the weakness is the variety in choice of heroes, you can only pick man, harpy, stayr, centaur and minotaur.  None of the bigger monsters or even cyclopes (which get a detailed painting guide in the book) or gorgons can be used which I feel is a big shame.  Even with that I like this game a lot and feel it's the best part of the book.

The final game is called trials of a demi god, which is a 'solo' game that you play on your own, trying to complete the labours of herakles, its the first time I've had a go at anything like this and to be honest it didn't grab me.  Without an opponent to beat it just didn't inspire me, it also takes up quite a large page count which I feel would have been better used on expanding on the previous two games.

All the hobby sections are ratehr good and i like the fact they've bothered to suggest paint schemes for the entire range and there are a couple of more in depth painting guides that are quite good as well.  The making rivers section seems a bit random, but is making me thing about actually giving it a go, my scenary collection could really use a river.  I didn't really need or learn anything from the guide to the gods, but it does help set the scene.

So in conclusion we have a great guide to the foundry greek mythology range, which contains the core of a couple of good games and allows you to get fighting with ancient greeks straight away, it's just a shame the range hasn't been utilised in full.
Posted by brownk29 at 10:37:00