I have two wargaming magazines on subscription, White Dwarf and Wargames Illustrated, both feature different aspects of my wargaming world.  White Dwarf is of course Games Workshops inhouse magazine and only features articles and models for GW's systems.  Wargames Illustrated is a historical wargames mag and rarely has any fantasy or sci-fi content, but covres a range of manufacturers and systems.

The two mags come at very different times as well, Wargames Illustrated comes to me earlier than release date (around the 21st of the month) and White Dwarf shows up around 2 weeks later when we are into the next month.  I don't actually mind this as it means I'm never more than 2 and a half weeks away from a new gaming fix. 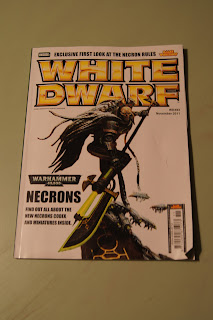 This month we have the Necron issue to conincide with the new Necron codex.  For the necrons you get a breif history, design notes, painting ideas and a battle report.  All expected and fine, I've never been massivly interested in Necrons, but I can't really fault them for covering the big release of the month.  We also get a couple of tactics articles (one for warhammer ogres and one for the lord of the rings strategy game), a featured sisters of battle army (including a nice organization diagram for the orders).  The other two interesting articles are the short regulars standard bearer and citadel hall of fame, two of my favorite series actually.  It's all ok, but half the mag is taken up with the Necrons which I'm a bit meh over, still if you like necrons I'm sure you'll be happy. 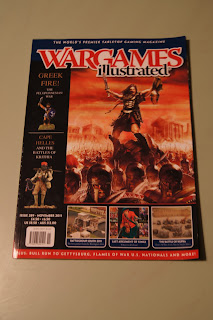 Wargames Ilustrated also themes its monthly output.  This months theme is the pelopolnesian war, and there are 4 articles on it, a basic history overview, a land battle, a sea battle and a look at the warriors of sparta.  Amongst others you also get a good flames of war article, a look at last argument of kings (the new supplement for black powder) and an interesting article on the Cape Helles part of the gallipoli campaign.  One problem with wargames illustrated is that it's very broad outlook keeps tempting me to start new periods.  The mag is full of pretty pictures of models as you would expect and I actually learn real history every month.
So which is better? I definately come down on the side of wargames illustrated, both magazines are the same size but WI just has a lot more content and takes a lot longer to read and is generally more interesting.  This isn't to say WD doesn't have its moments, and there has been a definate improvement of late, but it still feels light in comparison.
Posted by brownk29 at 14:19:00