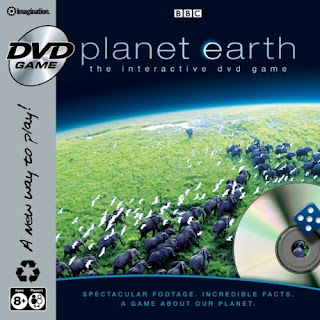 I was round a freinds house the other day and after a game of trivial pursuit he bought this out, Planet Earth: the interactive DVD game, and we gave it a go.

It's superfically very similar to trivial pursuit, you have a board with question squares (no categories, all just planet earth questions), roll again squares and bigger squares that have more specific question areas.  You roll the dice and move your piece answering questions until you get a question wrong or land on one of the specific squares.  You then answer a question on that specific topic, if you get it wrong your turn ends, if you get it right the DVD tells you to get a certain number of pieces of the 'planet earth puzzle', which you are trying to complete and your turn then ends.  The person who puts in the last piece of the puzzle wins.

The questions are on the DVD and are all multiple choice and feature facts and little videos from the planet earth series (I thought I clocked a bit of footage from other BBC series too).  It's all very pretty and well produced, but it's designed as a family game and I found most of the questions rather easy although there was the odd thoughie.  As you get 2-3 answers to pick from anyone can happily guess with a chance of getting it right, but knowlegde will still help you.

The questions being on the easy side isn't the issuse with this game though, the problem is that whoever happens to place the last piece wins.  Which makes basically all the questions before that completely pointless, and winning has no bearing on who has answered the most questions or even who's landed on the best squares.  This might be ok if playing with young children, but we were playing with a bunch of competative adults and it was more than a bit frustrating.  In fact it completely ruined the game, because there was no game.

Not all is lost though, we played again with some ajustments and managed to salvage the game.  It's very simple, put the puzzle pieces away and go and find your trival pursuit set, get out the wedges and the pies.  Basically treat it as a trivial pursuit board with the 6 specific catagories represented by the six coloured wedges, still end the turn on a wrong question or the successful getting of a wedge.  The first player to get all 6 wedges wins.  A simple fix that made the game go from frustrating and pointless to fun and enjoyable.  Of course this will only work if you like trivial pursuit.  The other alternative would be to keep track of puzzule pieces recived and annouce the winner as the player with the most.

If you like trivia games and the natural world and follow my suggested ajustments (or come up with your own of course) it's fun enough (although they essentially turn the game into an alternative card deck for trivial pursuit), although I think the replayability will be limited.  If you don't like trivia games, have no interest in the natural world or can't be bothered to modify the rules so there is actually a game, then really don't bother.