Historic Ships of The Thames in London

The day before the Diamond Jubliee boat parade I found myself taking a stroll along the Thames, and it turns out that there are several interesting historic ships moored along the bank. 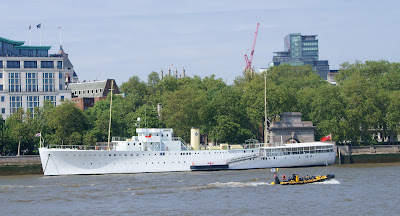 First up is was is now called HQS Wellington (formally HMS Wellington) which is a WW2 grimsby class sloop.  In WW2 she served mainly with the north atlantic convoys and also took part in operation dynamo (the evacuation at dunkirk).  After the war she became the Livery hall of the master mariners as Headquarters Ship Wellington which she remains to this day.

This is HMS President (formerly HMS Saxifrage) a flower class sloop and a Q-Ship (a ship disguised as a merchant ship to tempt submarines into attacking it) launched in 1918.  She served as a Royal Naval Reserve drill ship and is now a function venue. 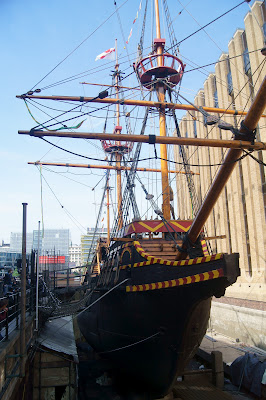 Next up is this replica of Francis Drake's ship the Golden Hind.  This replica was launched in 1973 and like the origanal has circumnavigated the globe.  It's not a big ship compared to something like the Victory and would have been extremly cramped for its 80 crew.

Of course there is also the mighty cruiser HMS Belfast by tower bridge which I visited last summer. 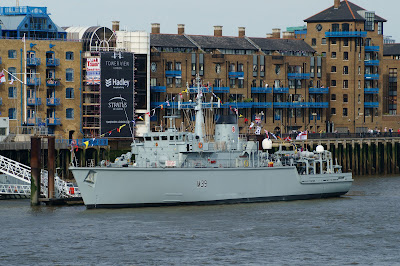 Just past Tower Bridge HMS Hurworth was moored at HMS President (the shore establishment not the ship mentioned above).  HMS Hurworth is a Hunt class mine countermeasure vessel.  As well as hunting mines the Hunt class also patrol the UK's fisheries.  Interestingly the Hunt class's hulls aren't steel, but are glass reinforced plastic. 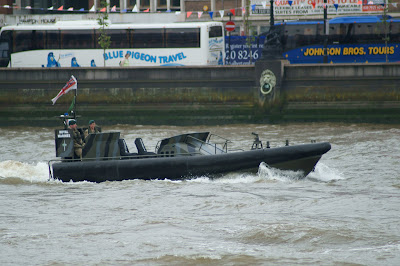 And finally up by Vauxhill bridge three of these small Royal Marine boats zoomed by.  Just outside the MI6 building actually, I'm sure it wasn't really a james bond moment but it was rather  cool.