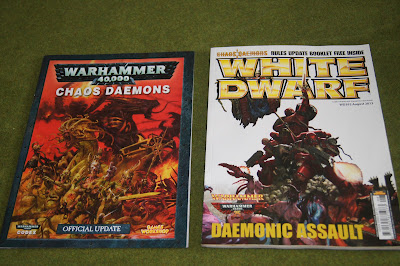 The first white dwarf after the release of 40K 6th ed and I was slightly disapointed not to find the new choas space marines that have been rumoured for ages taking a starring role, instead we get a new deamon release for both fantasy and 40K.  I'm going to start withe the free daemon booklet that includes rules for the new slannesshi chariots and updates for screamers and flamers for both game systems.  It also introduces soul grinders into fanatsy armies that was a bit of a suprise.  I'm a big fan of this sort of update and I like including it in a seprate handy booklet, although one complaint is that the booklet itself is not sturdy and I don't think will last long.

Of course the new daemons feature prominatly in the main mag as well, with a basic intro to the four main gods and a breif battle report for each system, both of which the daemons win, see if you want to win battles buy the new models ;)  Non-daemon stuff inclues a few pages of player armies with allies, only one of which (the space wolves/imperial gaurd) was really interesting, a fantastic Blanchitsu looking at the plastic nurgle lord and a somewhat naff arena of death trying to sell the new plastic warhammer heroes.  Finally the back cover has a awesome bit of artwork featuring a lord of change.   Overall an OK if not spectacular issuse. 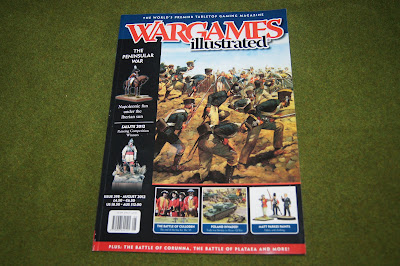 The theme of this months wargames illustrated is the peninsular war, and it's one of the more dominate themes we've had recently, but thats ok, as I'm interested in the peninsular war.  The theme articles include a peninsular war primer, a ridiculously impressive battle of corunna, the battle of salamanca and the battle of avila.  For flames of war we only get a single article which is a look at the soviet invasion of poland and includes a full list for an infantry company.  The other battles featured are the battles of platea and culloden.  Matt parkes teaches us how to paint again, this time clothing and the final article of note is the winners of the salute painting contest, which includes some rather wonderful models.  Like white dwarf the issuse comes across as OK, but not spectacular.﻿
Posted by brownk29 at 21:22:00