Unfortunatly my large gaming table has recently had to take a move into the garage, and this has worked fine, until this weekend, when it was rather cold, and playing outside was impossible.  Now like any sensible gamer I have some solutions for this evntually, including several board games that will fit on the smaller table I have indoors.  But we didn't play any of them, oh no, we had to go create a brand new game, well maybe not brand new, but a merging of two established games. 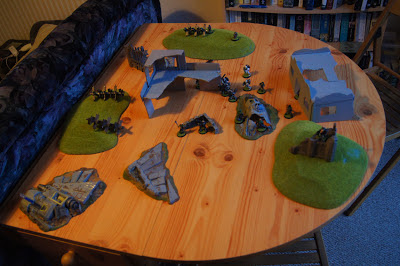 We each picked 100pts of 40K figures (just indivual figures no squads as such) and then played a game, but working injuries out like a game of mordheim.  We only made one other major rule change which was swaping I go - you go with an alternating activation (essentially stolen from star wars miniatures).  This meant each figure had a full, move, fire and assault phases and then the other player got to activate and use one of his figures and so on.  I did this to stop one side being able to blow another side away in one turn (something I've seen happen in mordheim a lot) 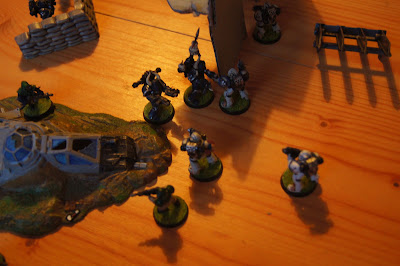 Essentially it worked, we played a couple of games and had fun.  Some tweeking needs doing, especially around points and army lists, but it works fine.  Also we needed to use more line of sight blocking terrain than we did.  My friend who I played against was also excited about the possibilty of using some of his random models in these games and went home saying he was going to paint up his squad of tau fire warriors that he has lying around and was even muttering ideas for an experience system.  I get the feeling we might be doing a bit more of this over the winter.
Posted by brownk29 at 09:56:00