My recent acquisition of a few of the new Star Wars Micro Machines inspired me to dig out my Star Trek Micro machines for this photo-shoot.  This collection is a mix of some that I had as a kid and some more recent ebay purchases, with the intention of playing some wargames with them.  That hasn't happened yet, but it definitely will do one day!

A couple of issues arise from the nature of the figures, the first is scale.  All the Micro Machines are roughly the same size, which of course means they are way out of scale to one another.  At first this bothered me immensely, but  have decided not to worry about it and treat the ships as markers on a larger scale area of space rather than as realistic dog-fight style game.  The second small issues is that some of the figures are silver special editions, which can look a bit silly next to more 'realistically' coloured ships, again I have decided to try and ignore this and maybe use the silver ones to denote command ships. 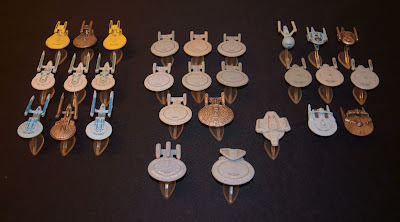 The core of the collection is this, my Next Generation era Federation fleet.  It also contains older classes of vessels that still featured in the various battle scenes in the Next Generation and Deep Space Nine.  The fleets hitting power is provided by nine Galaxy class, three Ambassador class and one Nebula class ships. This is supported by a Defiant class, two Miranda class, six Excelsior class and three Constellation class ships.  There are also a couple of science vessels, which aren't much use in a fight but could be useful objectives for scenarios,

The Federation of course need someone to fight..... how about seven Borg Cubes!  I think the fleet above might struggle to cope with one or two of these and that it wouldn't be that fun as a game. 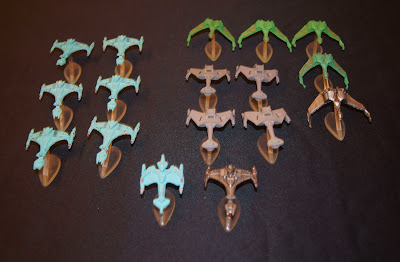 More realistic opponents of the Federation is this Klingon fleet.  Whilst not as big as the Federation fleet there is enough here for a good game.  There are three very different ships here, essentially a battleship, a cruiser and a destroyer, but I do wish there was slightly more variety in the classes avaliable.

The Romulans also lack variety having only two ship classes, the mighty Warbird and a scout.  Whilst I only have seven Romulan vessels, Warbirds are very powerful ships and this is definitely enough figures to have a game with against a numerically larger Klingon or Federation fleet.

Both the Ferengi (on the left) and Cardassians only have a single class of ship in my collection, which wouldn't make for a particularly interesting game even if both fleets have just enough ships for a skirmish.  I think the best use of the Cardassians would be to use them in conjunction with the Romulans to represent a fleet at the time of the Tal Shiar and Obsidian Order alliance. 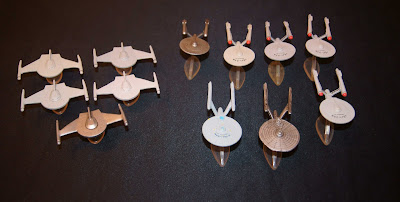 These are Romulan Warbirds and Federation Constitution class ships for the original series era, which can't find their way into the Next Gen era of the fleets above, I''m not really planning on doing anything with them at all. 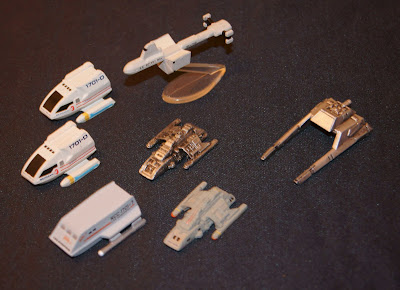 Here we have a bunch of shuttles, runabouts and other assorted ships.  No use for fighting at large scales, but could potentially be used as scenario pieces. 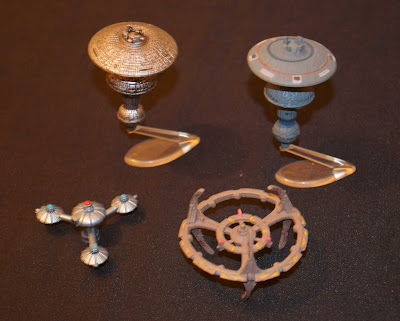 And finally a few space stations, which of course can potentially be used as static weapon platforms.

That's it for now, I'm not actively adding to this collection at the moment, but I'm aware that it's not complete and if some different ship classes happened to cross my eyes I could well end up buying more.
Posted by brownk29 at 09:56:00