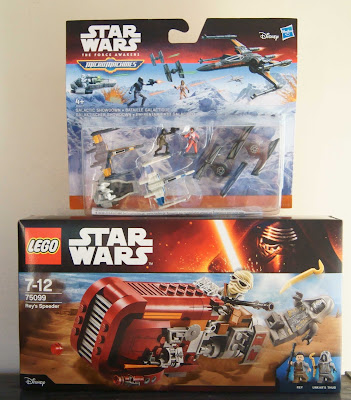 One of the great sources of trial in my life is that I work in a shop that sells toys, this means every day there is the temptation to buy more stuff.  The Lego section in particular normally helps fill any remaining space in my house.  I returned from a week off to discover that the new Star Wars toys had come in, a wave of childish joy came over me as I headed off to the toy department to check them out, inevitably at the end of my shift I had to make a couple of purchases.......

As well as the action figures and Lego that I was anticipating I was delighted to discover that Micro Machines were making a comeback.  They were surprisingly cheap as well, the above set of five vehicles and two figures was only a fiver.  I'm sure that I can remember a set of three of the old Star Wars Micro Machines used to cost a fiver too, and that was 20 years ago!  In the set I picked up we have two TIE fighters (one that looks like it's been flying through snow), two X-Wings, a little snow speeder, which looks to be a new design, and what I can only assume is a good guy and a bad guy.  The set didn't come with any of the little plastic flight stands, but oddly all the ships had a hole in them which the flight stands from the original Star Wars Micro Machines fitted perfectly.

Micro Machines were amongst my favourite toys as a child, and I had quite a lot, but spread over many different themes and properties.  After coming home with my new toys though I had to go and dig out my old ones.  The price difference suddenly made a bit more sense, the originals were of a much higher quality and the new ones do feel cheap in comparison. 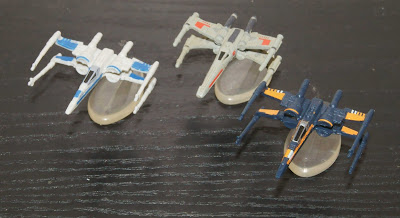 The truth is adding this cheap little set of figures and vehicles to my collection made my day and it was worth the price just for that alone.

Whilst the Micro Machines were an unexpected purchase, I knew that some of the new Lego would inevitably make it home..... 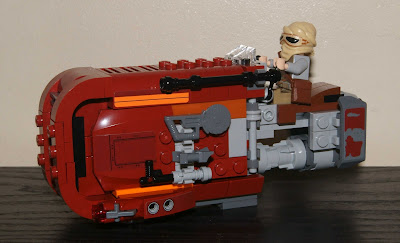 I decided on the cheapest set for now, as an intro to the range.  This is the female lead, Rey, on her speeder, which was seen in the trailer.  I don't really know anything about Rey yet as I've trying to avoid any plot and character details as much as possible before the films release.  It's a nifty little set actually, the build was interesting and a bit different and of course features one of the main characters, she comes nicely equipped with her staff and hair and mask options.  The set had one negative and that was the number of stickers that needed applying and lining up, Lego can and do print pieces in some sets, I wish they did it all the time and did away with stickers. 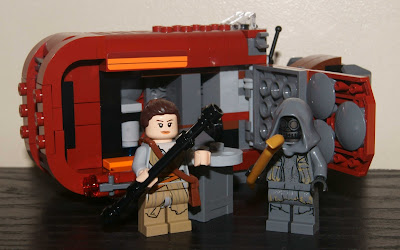 The speeder opens up and houses a storage container, although I was there was also a hole somewhere to hide the hair/mask piece that isn't in use at the time.  Rey of course needs someone to fight, and 'Unkars Thug' is provided, he's a bit of a mystery at the moment, but he's quite a nice minifig with some interesting printing.  A good set overall, and it gets my seal of approval.